Last year I became a MoviePass member, which allowed me to see more movies in theaters in any single year since I was in high school. However, I feel like I bought into a stock right on the eve of a crash, not MoviePass specifically (although its long-term future seems shaky) but the film industry in general. I had a front row seat this past year to plenty of nearly empty theaters, and bore witness to the gradual lowering of expectations, as audience members around me greeted cinematic trainwrecks like Independence Day: Resurgence and Suicide Squad with politeness (and in some instances outright enthusiasm) because they’ve been trained to expect less from blockbuster movies. Meanwhile, TV continued to steal the critical spotlight, driving the cultural conversation from People Vs. O.J. at the start of the year to Westworld and The OA at the end of the year. Already in 2017 I’ve heard more chatter about The Young Pope than I have about any new movie (at least new commercially released movie, not counting everything at Sundance).

It has left me wondering why I still persist in seeing new movies when so many of them, at least the ones which make it to my Midwest town, continue to disappoint at the same time that so many of the new TV shows make valid arguments for simply staying home for the now customary binge-watch. This is an odd argument to be having with myself at the moment because we are nearing the home stretch of Oscar season, and I have admired or loved so many of the awards contenders I’ve seen thus far (still need to get to Lion).  But, still, the new movies out there right now, the non-awards contenders (e.g., Rings, Return of Xander Cage, Resident Evil, The Comedian, Gold), don’t exactly inspire much enthusiasm dropping as they are in what is traditionally Hollywood’s dumping ground for troubled projects (January-February). So, this past weekend I kept my MoviePass in my pocket and stayed in. Here’s what I watched (beyond Super Bowl commercials, of course):

Drunk Stoned Brilliant Dead: The Story of the National Lampoon on Netflix

What Is It?: Douglas Tirola’s 2015 documentary about the history of the highly influential National Lampoon magazine/stage show/radio hour, briefly the leading source of satirical comedy in America until Hollywood poached away many of the writers and performers to staff Saturday Night Live. The doc traces the history of National Lampoon from its origins as a Harvard magazine dating back to the 1870s up to the moment it lost most of its advertising due to a controversial photo, Tirola choosing to end the story there rather than get into the sadder period of Lampoon’s history where it was bought out, run into the ground and licensed out to increasingly terrible movies.

Is It Any Good?: It’s a practical must-watch for fans of the history of American comedy and the various counter-culture movements of the 70s or those nostalgic for/curious to lean about a time when a single magazine really could command a significant audience and make a long-lasting cultural impact. If you fondly remember the National Lampoon’s glory days the way others now romanticize The Simpsons’ golden years or if you only know National Lampoon as the pre-fix attached all of those Vacation movies or even if you don’t know anything about National Lampoon at all, Drunk Stoned Brilliant Dead will prove to be a treasure trove of behind the scenes anecdotes and archival footage/audio of National Lampoon at its cutting edge best. As a documentary, there is plenty of talking head footage with the key players (those still alive, at least) and hangers-on, but from a sheer entertainment standpoint there’s also plenty of still-hilarious highlights from the National Lampoon’s memorable covers/articles, audio excerpts from the various concept albums and footage of the future Not Ready for Primetime Players honing their craft on the National Lampoon stage.

The Watcher on Netflix 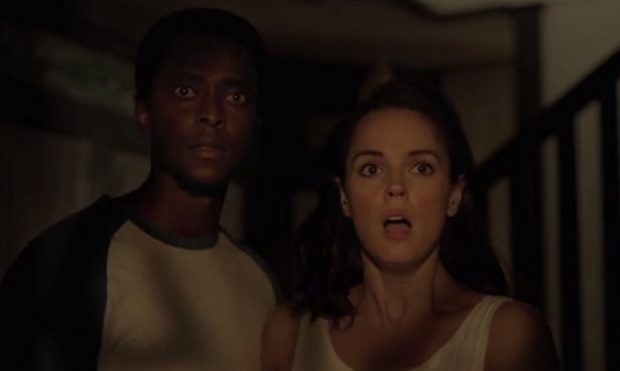 What Is It?: A supposedly fact-based horror movie about a young couple (Edi Gathegi, Erin Cahill) who move into a new home only to later learn of its dark history after a set of mysterious notes arrive warning them of impending doom. A meddling neighbor (Denise Crosby) has several secrets of her own as well as a special needs son whose frequent violent outbursts are somehow related to the “haunting.”

Is It Any Good?: It’s probably a more worthwhile use of your film/TV viewing time than Rings, but that’s not saying much. The carrot which kept me watching is Denise Crosby, a Star Trek actress I’ve rarely ever seen in anything non-Star Trek related. However, her performance is just on the wrong side of camp, and Watcher, which descends into a lot of raven-themed imagery, offers little more than bare bone thrills for fans of haunted house movies. The opening scene depicting the final moments the previous tenants, an elderly Japanese couple, spent in the house is easily the most effective sequence in the entire film. So, really, watch the opening scene and then move on, unless you’re a completist who can’t stop a film once you’ve started it, in which case just skip it entirely. 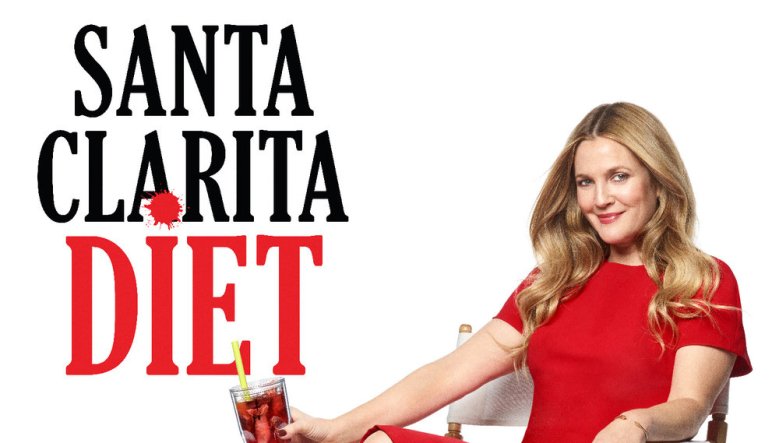 What Is It?: A zany zombie family comedy starring Drew Berrymore as the mom whose sudden zombieism makes her more assertive and confident (as well as dangerously violent) and Timothy Olyphant and Liv Hewson as the dad and teenage daughter attempting to normalize the completely abnormal, like how they suddenly have a dead body stored in a deep freezer to keep mom fed and happy.

Is It Any Good?: I have seen all 10 episodes, and I still don’t know the answer to that question. Beyond being good or bad or somewhere in-between, Santa Clarita Diet is above all else highly watchable, the type of comedy you’ll start, mildly enjoy and next thing you know you’ve watched 5 episodes in a row, all of them beating the same joke into the ground over and over again. Berrymore’s limited dramatic range and signature tendency to talk out of the side of her mouth somehow seems charming in this context as does Olyphant’s well-meaning attempt to play a role – the timid, henpecked husband sent into an emotional and mental tailspin – he’s entirely wrong for.

With 13 credited producers, it’s hard to know who deserves credit/blame for Santa Clarita Diet, but the chief culprit is likely show creator Victor Fresco, whose broad comedy instincts on cult classics Better Off Ted and Andy Richter Controls the Universe carry over into Santa Clarita whilst maintaining little of the satirical bite (ironic for a show whose pilot ends with Berrymore biting off a man’s finger). Fresco has more than proven he can satirize the American workplace and corporate culture with the best of them, but transporting that eye to the household and using zombieism to metaphorically speak to marital and parenting difficulties yield less successful results.

Yet I watched the entire season because, like I said, Santa Clarita Diet is remarkably watchable, particularly if you’re in need of background noise while working out or cleaning the house. Fresco’s Better Off Ted is more worth your time if you haven’t seen it yet, but Santa Clarita Diet has its charms (as well as a surprisingly high number of actors lifted straight out of The Grinder, which is never a bad thing). 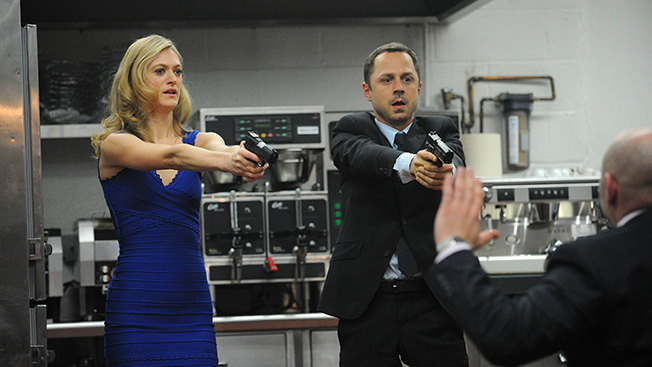 What Is It?: Amazon’s long-gestating series from producers Bryan Cranston, David Shore and Graham Yost, Sneaky Pete centers on a newly released con-man (Giovanni Ribisi) who owes some bad people (led by Cranston, who’s in the show more than you’d expect) a lot of money and sees a family of bail bondsmen (led by noted character actress Margo Martindale) as the target for a quick score if only he can convince them he’s actually their long lost cousin Pete.

Is It Any Good?: Yes. Unlike Santa Clarita Diet, I didn’t binge this all at once, picking up episodes here and there over the past two weeks before finishing off the final 3 this weekend. This is ultimately the fun, but tense exploration of the world of con men and women which Hulu’s Shut Eye should have been, ever tightening the noose around Ribisi’ neck as his various cons continually threaten to fall apart. Appropriately, multiple episodes cliffhang on “oh, no, if [insert name of character] sees that [insert MacGuffin] the jig is up.”

The challenge at the center of the show is getting us to care about and even root for Ribisi when he’s conning perfectly nice people, and the show attacks this by gradually revealing the various skeletons in the family’s closet, putting all of the players on something closer to level footing. At times, Cranston’s antagonist character, who is only gradually revealed to us, pulls focus. It’s as if Cranston just couldn’t help himself since he’s both a producer and actor on the show, all too happy to give his characters multiple lengthy speeches where he gets to roll out every actorly trick in the book, particularly during the epic 10-minute monologue at the end of the fourth episode. However, the season as a whole is a well-executed game of a con-man striving to beat the clock while struggling to avoid personal conflicts, even as he truly begins to feel for his adopted family. Just when you think everything’s wrapped up there’s a cliffhanger setting up season 2, and unlike Good Girls Revolt Amazon’s not walking away from this one. They quickly renewed Sneaky Pete for a second season.

What about you? What did you watch this past weekend?