In the Cersei v. Daenerys fight that has been season 7 thus far, the Stormborn Targaryen finally notched a victory, riding in on Drogon to lay waste to the Lannister army and possibly send Jamie to a watery grave.

All those other times Dany and the Dragons (which would be a great name for a band, btw) blew shit up real nice was mere prelude to this magnum opus of Apocalypse Now meets Saving Private Ryan meets The Hobbit. Soldiers were turned to literal dust in front of Jamie’s eyes. Tyrion looked on from afar with horror in his eyes, both at what’s become of his family’s army and in fear of what Dany’s possibly turning into. The Dothraki descended upon the Lannisters as if they’ve galloped right in from Stagecoach. And in the end one of our main characters (Jamie) tried to kill another one of our main characters (Dany), signaling yet again that season 7 isn’t messing around. The glacial past at which this show used to move is a thing of the past.’ 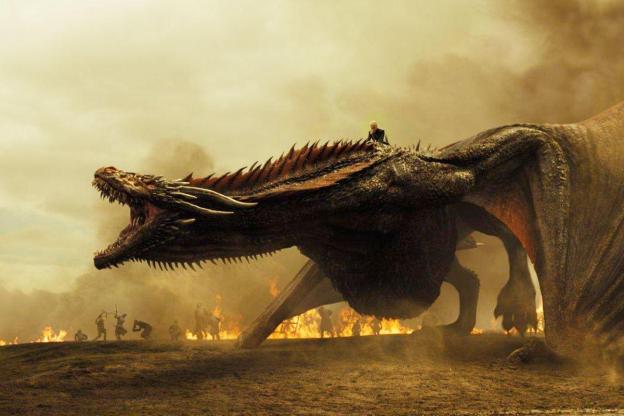 Well, maybe not completely. Even with its action-packed finale, “Spoils of War” still had plenty of scenes where people simply stood around and talked. Arya enjoyed rather awkward reunions with Sansa and Bran, the former feeling newly threatened by her and the latter prattling on in frustrating vagueness about everything he’s seen as the Three Eyed Raven (would someone press him for some damn specific answers!). Cersei placated Mark Gattis’ slimey bank manager as best she could. Dany and Jon struggled to get past the whole “bend the knee, you stubborn man.” There was even a lovely sequence with Jamie and Dickon lamenting the needless killing they’d just performed in Cersei’s name, contrasting Jamie’s classical heroism with his delusion over what Cersei has become.

But it’s the fire-breathing dragon stuff that sticks in the mind the most. It has to. From the moment Dany emerged from that fire with her baby dragons, we have been waiting for this very scene, for when the people of Westeros would look upon full grown dragons for the first time in multiple generations. As the showrunners put it in their after-episode featurette, this is the moment Westeros warfare changes for good, and while Bronn’s heroics with the Hobbit-esque crossbow proved the dragons can be killed he failed to deliver a killing blow.

The Lannister’s weapon is not so secret anymore, and before all is said and done it will probably kill one or more of those dragons. But we no longer have to merely imagine just how much damage those dragons will cause before going down because we just saw it. The destruction is absolute and seemingly backs up Dany’s theory that if she simply flew those dragons into the Red Keep this fight would be over, even with Cersei’s Frankenstein’s monster of a bodyguard.

Of course, that’s exactly what Dany always prefers to do when her back is really pushed up against the wall. Last season when the Sons of the Harpy had her dead to rights her plan was to simply fly her dragons into all of their cities and burn them to the ground before finally burning their leaders to a crisp. It took Tyrion to make her see that a mere show of her strength could be more effective than absolute destruction, a tactic she adopted successfully and got an entire fleet of ships out of it. The pattern repeated itself in “Spoils of War,” except this time it was Jon Snow’s counsel, not Tyrion’s, she turned to and trusted the most. Thankfully for her (and not so thankfully for the Lannisters), Jon agreed with Tyrion’s overall strategy of laying waste to armies, not innocent cities, and choking off King’s Landing instead of destroying it.

Indeed, the conversations throughout the episode which came laced with the most intrigue were those between Dany and Jon, especially as the “Oh, they’re about to kiss” vibes kicked in pretty hard when they were underground in that cave together. However, while the inevitable shipping has started it shouldn’t distract us from the key sequence when Jon realized he had switched places with Mance Rayder. As The Huffington Post summarized:

Dany says she’ll support him in his fight if he bends the knee, imploring him to do it for his people. She asks, “Isn’t their survival more important than your pride?” In that moment, Jon finally realizes something. Redditor xIdkTbhx notes that the Dany line is the exact same thing Jon said to Mance Rayder when trying to convince him to bend the knee for Stannis Baratheon in Season 5. In response to the line from Season 5, Mance said, “Fuck my pride. This isn’t about that.” The decision not to kneel led to Mance’s death, and now Jon understands why.

Bend the damn knee, Jon Snow. For a man forever shitting his pants over what will become of Westeros once the Nigh King arrives, this shouldn’t even be an issue. However, this episode did a better job than last week’s of explaining that Jon’s refusal isn’t due to pride but instead to the sense of responsibility he feels to his people. He’s probably right to fear what the North would think if he came back having pledged fielty to a southern woman who might not seem any better than the current mad woman occupying the throne. His Westeros equivalent of an approval rating would certainly plummet. Better that than being dead, of course.

Perhaps what they’re truly building up to is a moment where Dany earns his pledge of loyalty, or continues to behave more and more like a Targaryen to the point thus reinforcing his refusal to bend a knee. However, fans have long dreamed of Dany and Jon riding those dragons together into battle with the Nigh King, and I like to think that could still happen. There’s just some more bridge building to do before that, and the little matter of Cersei Lannister to deal with first. Plus, the dragons need to survive long enough for that vision to become reality. After “Spoils of War,” I’m not so sure that’s going to happen, but, personally, I’m rooting for the dragons.

Arya now has a Valyrian steel dagger, meaning Jon’s not the only Stark with a blade capable of killing a White Walker.

Davos – “Is it too late to change sides?” Don’t worry. Jon’s clearly just as smitten with Dany as you. He’s just too much of a Stark to admit it.

What did you think of “Spoils of War”? Are you a bit less certain about Jamie’s chances of survival? Are you repulsed by all the Dany-Jon shipping what with her being his aunt and everything? And penny for a thought for whatever’s going through Tyrion’s head right now? Let me know in the comments.