There’s this concerning trend developing at Netflix: They keep hiring promising directors to make movies for them, and those directors keep failing to produce their best work. This year alone, The One I Love’s Charlie McDowell unveiled the disappointingly navel-gazing The Discovery and The Guest/You’re Next’s Adam Wingard crapped out his whitewashed Death Note. Of course, there’s also Joon-ho Bong’s Okja and Cary Fukunaga’s Beasts of No Nation. So, some directors obviously can produce quality films for Netflix, but are those the exceptions to the rule?

The film starts with Adam Scott’s Gary demanding a divorce from Evangeline Lilly’s Samantha after she’s had to dig him out of the ground and free him from the coffin her son put him in. The extreme circumstance instantly lets us know we’re in for some kind of horror pastiche, and the tone is clearly comedic, particularly when Samantha yells at her son in a voice which seems to equate burying your stepfather in the back yard with something as normal as forgetting to clean your room.

What proceeds from there is a flashback to the days leading up to this event, chronicling Gary’s struggles to connect with his new wife’s 5-year-old son Lucas (Owen Atlas). Since we know where this is heading, we’re instantly aware there is something more going on here beyond standard stepfather/stepson drama. Beyond that, the fact that Lucas dresses and behaves like Damien from The Omen, speaks only sporadically through a sock puppet in a deep, Danny-in-the-Kubrick-Shining voice, sits in front of fuzzy TV screens like Carol Anne in The Poltergeist and seems to have possibly inspired his teacher’s suicide on the first day of school are all dead giveaways (obviously).

Gary’s understandably concerned. Samantha’s not. Moreover, Gary’s friends at a self-help group for stepdads (most of the members played by standup comedians or familiar comedy bit players) are there for support and comedic anecdotes about their own devil kids, but they need a little more convincing that Lucas is the literal devil (or, to be more accurate, the devil’s spawn).

And that’s the one-note joke of the movie. We know Lucas is the Antichrist. Gary gradually starts to suspect as much (with the help of Tyler Labine’s exposition-dumping wedding videographer). Everyone else has to be brought up to speed because they don’t actually know they are characters in an Omen parody. It’s like the first, pre-Mark Wahlberg quarter of Daddy’s Home if the audience knew Will Ferrell’s awkward interactions with his disrespectful stepkids was because those kids were evil incarnate with demonic powers and tendency to cause tornadoes and attract crows.

It’s all perfectly fine, lifted considerably by Scott’s nice guy blandness gradually being consumed by the insanity of the situation. You see what Craig is doing, repeating his Tucker & Dale “familiar horror movie told from a different point of view” trick. However, Tucker & Dale got away with that due to the innate lovability of Tyler Labine and Alan Tudyk’s hillbilly characters as well as the shock humor of watching a bunch of standard slasher movie victims unwittingly causing their own grisly deaths through a combination of incompetence and bad timing. 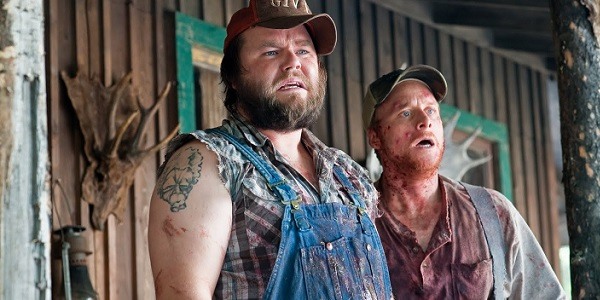 Little Evil has neither truly lovable characters (though Gary is likable) nor consistent humor. Its Omen jokes simply aren’t as clever or plentiful as Tucker and Tale‘s Friday the 13th jokes. Instead, it comes off as a glorified Funny or Die/College Humor/Adult Swim short, leading you to occasionally smirk or think “oh, that’s kind of cute” instead of laughing out loud.

Then the switch happens. Halfway through, Little Evil suddenly turns into a tribute to the uniquely challenged bond between stepfather and stepson, with subtext rapidly becoming text and the Omen of it all reduced to the mere metaphor it always was. To be clear, Lucas remains the literal Anti-Christ and Gary his conflicted guardian, but the true goal of the movie reveals itself as Craig appears to be working through his own feelings about parenthood considering that he gained a stepdad when he was around 12 and now serves as a parent to 2 kids of his own at the age of 45. So, even as we watch the horror comedy antics play out at a water park and then a nunnery and encounter cults, demon hunters and a best friend who just happens to have a monster truck the script has been flipped from wink-wink, nudge-nudge homage to heartfelt sincerity.

It’s a switch that doesn’t really work, but I appreciate the attempt. It at least gave us a scene as bonkers as Adam Scott fighting an enraged Sally Field (spoilers on who she plays, but it is worth noting that Eli Craig is her son).

Netflix’s Little Evil plays the same joke over and over again until it suddenly stops, surprisingly taking its The-Omen-as-a-dark-comedy premise into a heartfelt, unabashedly saccharine place in its final third. The juxtaposition doesn’t really work, and the jokes before the switch happens are more smirk-inducing than anything else. However, a likable central performance from Adam Scott and the capable support of scene-stealers like Evangeline Lilly, Bridgett Everett (playing a man because, sure, why not), Sally Field (!), and Tyler Labine at least makes the viewing experience a mildly pleasant one.