I say that because after Manchester By the Sea (and so many other Affleck or David O. Russell-connected movies like it) maybe we’re all a little tired of watching Bostonians being loud, obnoxious and devastatingly sad. After HBO’s stupendous documentary Marathon: The Patriots Day Bombing and Mark Wahlberg’s comparatively superfluous Patriots Day maybe we’ve had our fill of cinematic reflections on the aftermath of that tragic day in 2013 when three people died, 16 lost limbs and hundreds of others were injured. After The Finest Hours, The 33, Everest and various others, maybe we just don’t care about “inspired by a true story” event movies anymore, especially ones which seem transparently aimed at Oscar voters. After The Theory of Everything and Me Before You maybe we’ve been immunized to tragic relationship weepies.

So, Stronger, an inspirational, fact-based tearjerker about one of the most prominent Boston Marathon bomb survivors? Ugh. No, thank you.

Small problem: Stronger also happens to be unbelievably compelling. Despite all the understandable reasons you might have for rejecting it sight unseen you’re doing yourself a disservice because this little film that’s being dumped into late September is one of the most moving mainstream releases of the year. No one was really asking Jake Gyllenhaal and David Gordon Green to make this movie, but we should be thankful that they did anyway, releasing it as the first film from Nine Stories Productions, Gyllenhaal’s new production company specializing in gritty micro-budget dramas.

Stronger, though, initially appears to be anything other than gritty. Instead, it seems overly familiar and schmaltzy, introducing us to a lovable, but feckless Bostonian, 28-year-old Jeff Bauman, whose path through extreme adversity – losing both of his legs while standing at the 2013 Boston Marathon finish line to root on and win back his estranged girlfriend Erin – will clearly be tapping into an inner strength and leaning heavily on the love of a good woman (played by a truly transcendent Tatiana Maslany). That’s not to say the film is totally lightweight. No, contained between the moment the bomb goes off to when Jeff is finally discharged from the hospital are a series of emotionally devastating sequences, particularly surrounding Erin’s immense guilt and confusion over what to do. However, before long you start to think you know where this is ultimately going.

As Vox argued, though, the movie’s secret superpower is the way it prioritizes the character’s internal journey over his external one. Those montages of Jeff steadily working his way through rehab and fighting through various setbacks never quite materialize in the way you’re expecting. Instead, there an awful lot of him struggling to ask for the kind of help he actually needs, drowning in a sea of misguided support from friends, family and the entire city of Boston and battling the same kind of personality defects and weaknesses which plagued him even before he lost his legs.

It’s ironic because as Stronger perfectly dramatizes Jeff Bauman became one of the symbols for Boston Strong, the mantra adopted by the entire city to directly refute the notion that the petty actions of (domestic) terrorists could break them. Bauman was the first victim transported to Boston Medical Center. The following photo of him (via HistoryVsHollywood) became iconic: 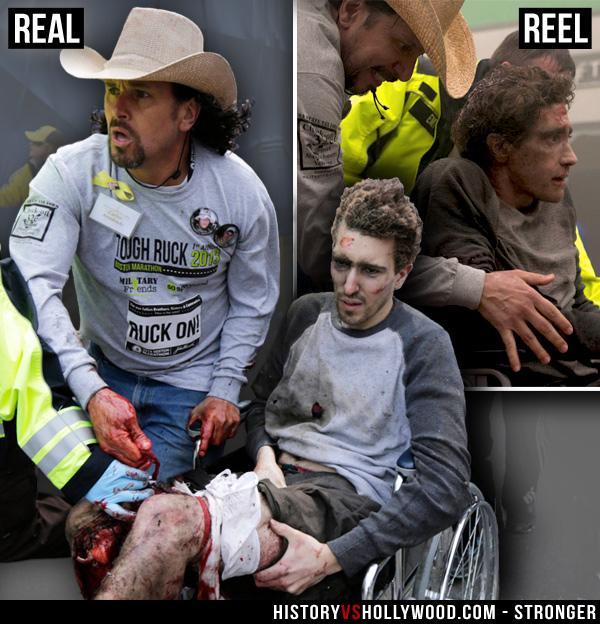 When he awoke after surgery and scribbled “bag, saw the guy, looked right at me” (which is streamlined into “saw the bomber” in Stronger) on a piece of paper the resulting interview with the FBI proved instrumental in identifying Tamerlan Tsarnaev and then later his brother Dzhokhar, the two perpetrators of the bombing. So, Bauman was a highly visible victim who helped capture the bad guys and was thus embraced by a grateful city which interpreted his role in the capture as symbolic and inspirational.

But the truth, as Stronger tells it (from a script heavily indebted to Bauman’s 2014 memoir of the same name), is far more complicated. Boston Strong sounds nice. It certainly looks good on a t-shirt and on banners hung at Fenway. However, it’s a meaningless expression to Jeff for the majority of Stronger. He’s continually told that he’s a hero, yet he feels like anything but. 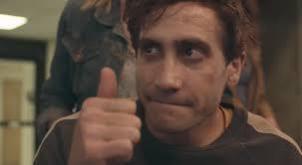 Because Bauman was essentially a real life, Boston version of a Judd Apatow protagonist, a flailing manchild lacking direction and conviction. The life-altering tragedy which befell him didn’t immediately change that. Reuniting with his girlfriend Erin and leaning on her for support didn’t change that either. That search for a hidden inner strength, the one we assume every cinematic hero will find in such a situation, didn’t actually come easy to Jeff, which almost makes his story more relatable. Sure, it took losing his legs to eventually learn how to stand up to his domineering, alcoholic mother (played by Miranda Richardson), the two of them living together in a small, dirty apartment both before and after the bombing, but even that took longer than you’d expect, with Jeff proving unwilling to reject his mother’s continued efforts to benefit from his newfound celebrity.

That’s what proves to be so effective in Stronger. Jeff has to put on a brave face and publicly live up to how the city sees him, but the true breakthrough doesn’t actually come until he’s strong enough to admit that he’s not at all okay, suffering in silence from depression, self-pity, self-doubt and PTSD. And that he realizes the only way to get through it is to simply keep at it day after day and ask for the kind of help he actually needs, not the kind of help his loved ones think he needs. It’s one of the better realizations I’ve ever seen of finally making a character’s internal struggle external.

Bringing that kind of struggle to the screen doesn’t always work out. In fact, the results can often be downright embarrassing. That’s where it helps to have cast Jake Gyllenhaal and Tatiana Maslany, who both say more with facial expressions than their actual words throughout the majority of the movie. Maslany, in particular, astounds with the amount of information she continually communicates through the simple act of looking at someone. One early prolonged sequence of her locking eyes in a wordless embrace with Jeff to distract him from the immense pain he feels when the doctors remove his sutures for the first time is particularly powerful. Gyllenhaal is, of course, also awards-worthy here, but you expect that from him. Unless you’re familiar with Orphan Black, you don’t see it coming from Maslany, whose performance will hopefully be remembered come awards season.

David Gordon Green, whose last film Our Brand Is Crisis was rightly rejected, compliments his actors with some subtle, but inventive camerawork. As Vox pointed out, Green only goes in for close-ups, for example, when the characters are experiencing internal conflict. Thus, scenes of Jeff in rehab are more clinical and matter-of-fact whereas scenes of him at the bar or in a car alone with Erin cut to the heart with surgical precision.

The result is a movie which can crush you emotionally just as well as Manchester By the Sea. Heck, the script even repeats Manchester’s trick of holding back on depicting the central tragedy until much later in the story via flashback, at which point it can have the most dramatic impact. In Stronger’s case, that means we don’t see the bombing from Jeff’s point of view until the third act, dropping it on us when he’s at his lowest point and forced to finally and truly contend with what happened instead of wallowing in self-pity or drowning his sorrows in beer. The effect is genuinely heartbreaking and ultimately inspirational.

Stronger is the type of film you need to be told to go see because it doesn’t really feel like a film we were asking for. So, this me is telling you to go see Stronger. It is a tearjerker that comes by its emotions honestly and serves as a showcase for two beautifully realized and often devastating central performances from Jake Gyllenhaal and Tatiana Maslany.

Sadly, the one false note in Stronger is its happy ending. Over the closing credits, we are told Jeff and Erin eventually married and had a child together. In 2016, she ran the Marathon again, and he was waiting for her at the finish line (as pictured above, and shown in Stronger’s credits). However, happy endings don’t always stick in real life, and though it goes unmentioned in Stronger the truth is Jeff and Erin divorced in February of 2017 after less than three years of marriage.