I had to roll my eyes when I read this quote from Seth MacFarlane about The Orville in EW’s Fall TV Preview issue: “Good science fiction doesn’t ignore current events and sociopolitics. The Orville doesn’t go about it as directly as a comedy like Family Guy – it goes about it in a more allegorical way. I always feel that’s the duty of science fiction.”

It’s not that he’s wrong about the role of science fiction; it’s more I don’t really trust him to be able to usher in such allegorical commentaries with a requisite amount of nuance. The guy responsible for “We Saw Your Boobs” and “The Mustache Song” is now going to tackle the intricacies of discrimination? Seriously? If you say so. I applaud your intentions, but there’s a real credibility gap here.

At the time I came across that quote, though, I hadn’t seen “About a Girl,” Orville’s first full blown very special episode in the grand tradition of Gene Roddenberry’s Trek commentaries on race, gender, identity, hate and society in general. Orville’s first two episodes weren’t exactly commentary-free, with last weekend’s reality TV parable being especially obvious. But they were a far cry from “Measure of a Man,” “Let That Be Your Last Battlefield” or any of Star Trek’s other celebrated ruminations on tolerance and the pressing issues of the day.

“About a Girl” is MacFarlane putting his money where his mouth is. He wrote the show’s first three episodes, and “About a Girl” is him following through on his promise to honor the spirit of Star Trek by using Orville’s sci-fi trappings to speak to more important issues than just traveling through space and learning to cope with suddenly having to work with your ex-wife. Thus, the jokes in “About a Girl” are notably more infrequent than in prior episodes and even more tamed down than usual. Instead, this allegorical reflection on gender identity and discrimination is played as seriously and sincerely as anything MacFarlane’s ever done.

This allegory thing, though, is harder than it seems, and going this route so early in the season, before we’ve spent a little more time with these characters and in this world, is a mistake. However, there’s enough here to wipe that snarky grin off of my face, and cause me to sit up and pay closer attention to what MacFarlane is really trying to do here.

“ABOUT A GIRL” SPOILERS BEGIN HERE

As per last week’s cliffhanger, Bortus and Klyden, they of the single-gender, forehead-ridged aliens known as Moclans, hatched an egg and were stunned to see a female baby come out of it. Moclan females are only born once every 75 years, or so we’d been told. So, it’s not so much the Moclans are exclusively male-only; it’s more that female Moclans are so rare and inessential to the proliferation of the species that they have no place in Moclan society. However, here’s an adorable little girl baby. What are Bortus and Klyden to do?

Opt for gender-reassignment surgery immediately, of course. Why not? To them, such a procedure is no different than a human baby correcting for a cleft palate. No one else on the Orville sees it that way though, and thus mobilize to convince Bortus to leave the decision to his child whenever she is old enough to do so. Of course, at this point we have little to no sense of Bortus’ relationship with any of these people, meaning Alara’s attempt to persuade him through boxing and Malloy and LaMarr’s attempt through beers and Rudolph the Red-Nosed Reindeer lacks a fair bit of weight. However, the tale of Rudolph and his abnormality proving so crucial to Santa’s quest is enough to convince Bortus – it’s, um, an awkward character turn – but his effort to also convince Klyden results in the cliffhanger reveal that Klyden was born female.

The episode doesn’t do nearly as much with that reveal as you’d expect, mostly because this allegory is less concerned with Klyden’s personal identification or potential for conflicted feelings over his parents reassigning his gender without his input and more concerned with simply establishing that in the argument over what to do with this baby the parents are in complete disagreement. This folds the brewing controversy over whether or not to circumcise male babies into the allegory, since in that case the consensus seems to be that the correct decision is simply the one both parents agree on.

In classic Trek fashion, this all leads to a tribunal on the Moclan homeworld where one of our humans, a reluctant Kelly, attempts to convince a bunch of aliens (by using mostly human examples) that how they view the world is entirely wrong, but in a slightly non-Trek conclusion the aliens remain unconvinced, despite a last-minute appearance from a female Moclan who turns out to have ghost written the works of their most famous author. They approve the gender-reassignment surgery anyway, and Bortus and Klyden are left pledging to care for their baby even though the damage done to their relationship is crystal clear. Thus, the side the episode seems to be taking on the issue is directly rebuked by a downer ending.

Welcome to Star Trek in 2017, I guess, a time where science rarely actually seems to win anymore.

Predictably, in taking on such larger issues than itself “About a Girl” has inspired mother!-like polarization, with AVClub running a headline (“In its best episode yet, The Orville goes to trial for a baby’s happiness”) directly contradicting IndieWire’s headline (“The Orville Episode 3: Why Its Poor Understanding of Gender Makes ‘About a Girl’ The Worst Episode Yet”). IndieWire’s general argument is that in defining the gender argument in binary, male/female terms “About a Girl” fails to grasp the true complexity of gender identity and thus does a disservice to its subject matter. AVClub, in a somewhat more literal reading, questions the logic of an alien race that would self-identify as male if there are no females, but champions the episode’s treatment of the feuding same-sex couple: “It’s welcome to see how the partners maintain, even as they fundamentally disagree, their love for each other and their dedication to doing the best they can to raise a happy child.“

I lean more toward the AVClub’s side in this argument. Heck, I, at times, was even sympathetic toward the Moclan side, not in the sense that I support the elimination of choice. But everything they said about the life of ridicule and social stigmatization awaiting Bortus’ daughter was accurate, pitting the idealism of choice versus the realism of extreme social backlash.

Not helping matters is the way “About a Girl” seems to mix its metaphors, framing a trans argument in circumcision terms. However, the episode ultimately succeeds in its treatment of what such a divide can do to the parents, and is at least brave enough to not pretend as if the world’s problems can really be solved in the course of a single episode of TV. This is Seth MacFarlane trying to do a little morality play and sci-fi allegory, and the result is, as expected, a bit messy. But it’s a better attempt than I ever would have expected. 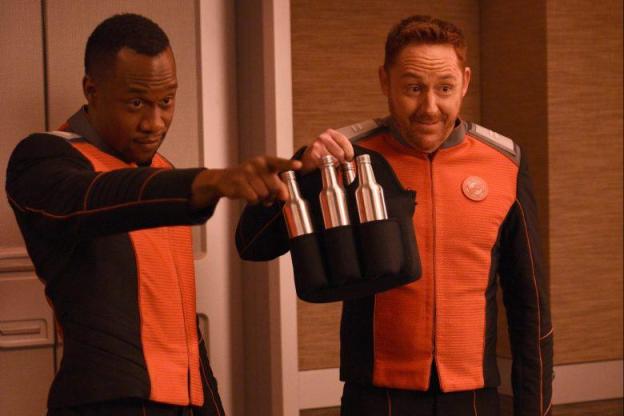 Where do you fall on “About a Girl”? Worst episode? Best? Or just kind of a boring ethics seminar that could have actually used way more humor? Let me know in the comments.