A week after going all stand-alone with an adventure focused on the show’s least utilized characters, Isaac and the Doctor, The Orville returns in “Cupid’s Dagger” to its default setting of focusing on Ed and Kelly. The ship is tasked with its biggest diplomatic mission yet: acting as a mediator between two warring races while awaiting DNA results on an ancient artifact which might determine who has the rightful claim to their planet. Ed and Kelly need to be at the top of their game to contain this potentially combustible situation. So, now would be a really bad time for that blue alien, Darulio, Kelly slept with a year ago to come waltzing back into their life and an even worse time for him to project pheromones which turn our two central characters into love-struck teenagers.

Yep. But it all works out, and now Ed and Kelly are even since he slept with the same guy she did. At least I think that’s point. Actually, I’m not sure what they’re trying to say here. I just know this episode doesn’t seem to realize how creepy it is.

What begins as an apparent Star Trek “Naked Time” homage/rip-off (look at those people losing their inhibitions) morphs into something closer to a love spell plot transforming Ed, Kelly and the Doctor into sex slaves who shirk their duties and recklessly pursue the person whose spell they are under (the Doctor being under Yaphit’s spell since he unknowingly absorbed some of Darulio’s pheromones). It’s a problematic turn.

We’re simply supposed to ignore the rather questionable ethics of a blue alien who goes around knowingly infecting others and chalking it up to no big deal since all that happens, in the end, is they have some great sex. He seems to later vaguely realize it’s not as innocent as all that, but his victims more treat the whole thing like some drunken experience they’d rather forget.

Ed’s final interaction with Darulio, after the pheromone infection has worn off, is icy, but Kelly’s isn’t. Instead of “rape” she simply plays the “Does this mean I didn’t cheat on Ed last year under my own free will?” card in a disgustingly hopeful manner. It would be one thing if Darulio somehow didn’t know about his pheromones or at least didn’t know how they’d impact members of another species. Then it’s an understandable mistake. But the dude knew and did nothing to stop it. He could have at least worn gloves or avoided shaking hands. That he robbed people of their consent and essentially raped them is somewhat lost on this episode. Instead, it plays most of it for laughs because Darulio’s sole purpose as a character is simply to advance Ed and Kelly’s relationship by putting them somewhere close to even footing on their breakup. 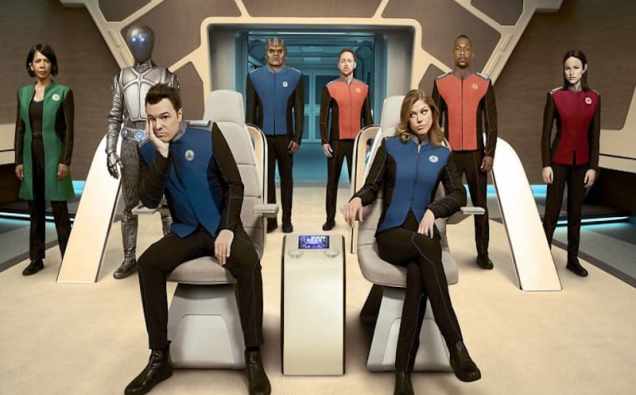 “Cupid’s Dagger” is the 9th Orville episode, but it is the fourth to primarily concern itself with Ed and Kelly’s messy breakup and uneasy future. Mercifully, this should be it for this storyline. We first learned about it in the pilot then watched the characters remember how much they hated living together when they were forced to cohabitate in that weird zoo then saw Ed eat some humble pie when his new girlfriend almost destroyed them even though he’d been warned by Kelly and wrote her concerns off as jealousy. Now, Ed has learned first hand just how irresistible that darn Darulio is, albeit after first acting hypocritically in forbidding Kelly from actually moving on.

Since the entire show started with Ed and Kelly’s breakup and the inherent conflict in the premise is a divorced couple commanding a ship together, their tension and history together will always pull focus, and understandably so. However, “Cupid’s Dagger” was far more interesting in the brief moment it took to acknowledge Bortus’ ongoing marital difficulties than it was throughout any of its discussion of Ed and Kelly’s past or future. One is a dramatically rich scenario, the other a kind of hackneyed TV show premise, forcing them to concoct a scenario like the two warring aliens in this episode whose conflict is designed to speak to Ed and Kelly’s shared blame and need to learn how to better co-exist. 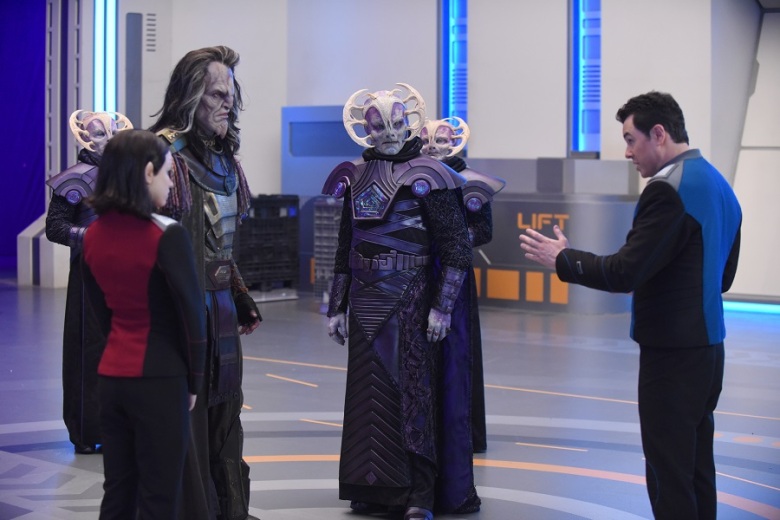 The ending leaves open the possibility Kelly’s initial affair with Darulio was a pheromone-induced fling, which is upsetting. Kelly has already spent a good chunk of her time on this show apologizing to Ed for the affair, but she’s also made a fair point that he emotionally abandoned her long before she stepped out on him physically. To that end, she’s owned her mistake but refused to take total blame for the situation, forcing Ed to eventually acknowledge his part in all of it. To now say she may not even have been in control when she made that mistake sort of retroactively cheapens her as a character all in service of most likely trying to make her seem more sympathetic, more like an equal victim in the scenario.

But I did say “leaves open.” Lowe plays his final moment as if Darulio knows the true answer to Kelly’s question but prefers to say whatever he thinks will make her feel better. What will make me feel better is The Orville finally moving on from the continuing fallout of Ed and Kelly’s breakup. More than anything, though, just don’t play rape for laughs. You shouldn’t have to be told that. 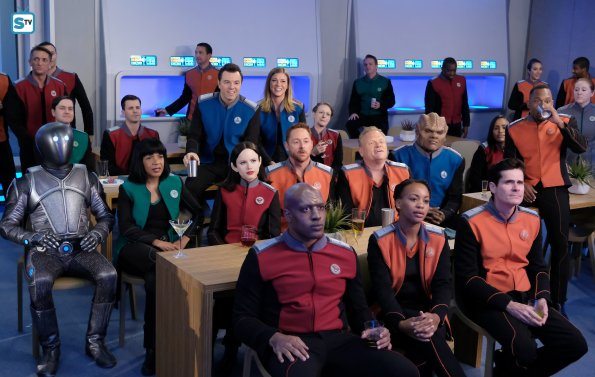