“Firestorm” drops us into the middle of a crisis. The ship takes on heavy damage while attempting to escape some kind of ion storm. An engineering crewmember is trapped under falling scaffolding. The only person strong enough to save him is Alara, but she freezes when a fire breaks out. When he dies and the ship, safely out of the storm, enters into a respectful mourning period, Alara cannot forgive herself, seemingly setting us up for an episode-long examination of the suppressed trauma which caused her to be so spooked by the sight of fire. This, clearly, is to be an hour devoted not to the loss felt by family and friends but instead the long-lasting guilt of the survivors and failed protectors.

Just kidding. It’s actually a total mind fuck episode with a scary clown, giant monster, a swarm of spiders, and a killer robot.

On more than one occasion, Alara openly asks what the hell is going on, and explanations like group psychosis and general space sickness come and go, offering us a framework to latch onto until we sense some kind of “it’s all a dream” explanation is in the offing. In the end, Alara is alone on the ship, hunted by a suddenly red-eyed and genuinely menacing Isaac, but in actuality, she’s acting out a training simulation to help her work through her fears. Her short-term memory was wiped beforehand to ensure she doesn’t know she’s just on the holodeck. 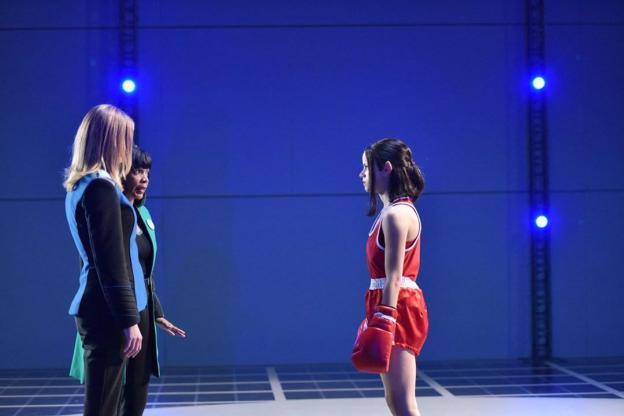 I’ll give this to them: I didn’t see any of that coming. As with Family Guy and now The Orville, Seth MacFarlane’s stock and trade is imitation. His shows produce slightly more rambunctious, harder-edged versions of things we’ve already seen before. So, you often have an idea where the storylines might be going before they ever get there. “Firestorm,” though, caught me totally off guard. I mean, how can you really predict scary clown on a spaceship? Thus, my immediate reaction is one of begrudging respect.

I’m also frustrated. “Firestorm” is classic, dark Star Trek. Directed by Brannon Braga and written by Cherry Chevapravatdumrong (Family Guy’s only female writer, btw), the episode is perfectly scripted to land on killer cliffhangers every act break, delays the reveal of what’s actually happening just long enough for us to be as confused as the characters, and offers admirable horror movie scenarios, about as scary as a (supposedly) family-friendly major broadcast TV show can be. But why can the Orville be this good a week after what might have been its worst episode, or if not worst then at least most troubling, seeing as how they played a rape allegory for laughs.

Maybe because it’s still a show in its first season and these things take time to find the right balance. All post-Original Series Trek shows, including Discovery, suffered inconsistent first seasons. In The Orville’s case, they still haven’t quite figured out how to be funny and serious at the same time. Maybe it’s also because given MacFarlane’s sensibilities The Orville will always be at risk of occasionally trying to make grand statements that either come off as overly derivative or regrettably ill-conceived.

Either way, if “Cupid’s Dagger” was everything wrong with The Orville “Firestorm” is everything right. It begins from a place of real emotion, evolves into a sci-fi/horror scenario, sprinkles in the occasional joke (some of them work, some don’t), and figures out how to best use the entire cast in what is ultimately an Alara-centric episode. It takes full use of the show’s sci-fi malleability and gives us yet another episode which is quite unlike any they’ve done before. In so doing, though, it arguably sacrifices what begins as a somber conversation about guilt and turns it into a comparatively empty exercise in twisty storytelling. However, after “Cupid’s Dagger” I welcome such a well-executed sci-fi mind fuck.

There are now only two episodes left in the season since Fox has decided to shift the thirteenth episode into next season. So, two more and then we’re done until 2018. I hope whatever they have in store for us is as good as “Firestorm.”

What did you think of “Firestorm”? Let me know in the comments.