Prior to October 1, the biggest concern I had about The Punisher was whether or not a taciturn, brooding supporting character who was introduced as a dramatic foil to Daredevil could truly support his own series.

Then Stephen Paddock opened fire from a Vegas hotel and killed 58 people while wounding 500 others, marking the deadliest mass shooting event in U.S. history and prompting Netflix to the premiere of Punisher a full month. But because this is 2017 another mass shooting was naturally not far behind. So, just over a week before Punisher’s new release date Devin Patrick Kelley walked into a Baptist church in a small Texas town most people hadn’t heard of before and murdered 26 people and injured 20 others. In little more than a month, the country experienced two of its five deadliest mass shootings ever.

What a great time to watch a show about a gun-toting vigilante mowing his enemies down, right?

The timing could not have been worse, and the critics couldn’t help but point that out:

Now nearly a month after its premiere, The Punisher is the second lowest-ranked Marvel Netflix Original, besting only Iron Fist:

To be fair, the “wrong show at the wrong time” vibe is not the sole source of criticism lobbed at Punisher. As with most Marvel Netflix Originals, it has been accused of being too long, stretching what is really a 6-8 episode story into 13-episode territory for no real narrative reason. Moreover, many, like Vulture, have argued the show’s efforts to humanize its central character’s brutalism don’t always work, “No matter how many sad faces Frank Castle makes about his trauma, The Punisher can never escape the terrible gravity that its most basic purpose is inviting viewers to enjoy watching an angry man murder as many people as he can.”

How much of this is a reflection of the show’s genuine dramatic failings and how much actually reflects the existential crisis journalists and the media are currently undergoing about their level of responsibility to society? Is The Punisher a good version of the type of show we’re not so sure we should be watching and celebrating these days? Or is it a flawed-to-bad show which hits the same points over and over again, as if we won’t notice the strain creeping in? Does The Punisher really deserve to be romanticized by the Marvel Netflix series formula of painting its Defenders as flawed, but ultimately heroic figures? How troubled should we be (if we should be troubled at all) by how many people in the military and law enforcement are going to adore this show (as per the following Vulture quote)?

I don’t have the answers. I’m only 7 episodes in. I admit, the “wrong show, wrong time” vibe got to me in terms of keeping me away at first. As io9 memorably put it, there was never really going to be a “right time” for a Punisher series anyway because although “he’s most often framed as a complicated antihero who abides by a personal code that defines his sense of justice, the Punisher is Marvel’s equivalent to a mass shooter.” Beyond that, I’ve just grown incredibly weary of binging these Marvel shows like we’re all in some kind of race, and I’ve simply never been a Punisher fan, despite Jon Bernthal’s eye-opening take on the character in Daredevil: Season 2.

So, for the first time since the release of Jessica Jones I’ve been taking my time with a new Marvel Netflix Original, consuming it in small chunks and letting it sit with me. Those headier questions about the show’s relation to gun violence are still on the horizon for me because what I’ve seen thus far is a surprisingly engrossing examination of PTSD. There have been more scenes of Iraq and Afghanistan War veterans simply sitting in a circle talking about their feelings than there have been gunfights, and I’m loving it.

I wouldn’t have expected it, but the first half of The Punisher’s first season is basically the comic book TV show version of Thank You for Your Service, Miles Teller’s recent awards hopeful drama about Iraq War veterans struggling to adjust to civilian life. Except here there’s also a parallel storyline involving a former NSA analyst (Ebon Moss-Bachrach as the “Micro” we’d learned about in Daredevil: Season 2) faking his death, leaving his wife and kids in the dark about it, and blackmailing Frank Castle into helping him topple corruption in the military.

The first episode picks up exactly where Daredevil left Frank: hunting down the bastards who killed his family. Crucially, he offs his targets in quick succession (as in, before the opening credits) and tries to retire his old Punisher gear for good, thus clearing the slate and launching the series into more standalone territory where you don’t need to have seen Daredevil or any of The Defenders shows to keep up. You can even use context clues to figure out how Karen Page (the sparingly used Deborah Ann Woll) fits into his life.

Mostly, you follow the story of an angry man sucked back into a life of violence upon learning there was more to the deaths of his wife and kids than he realized. As he partners with the similarly screwed over Micro, their goals eventually align with Department of Homeland Security agents who are unaware of how much shit they’re actually in.

At the same time, Frank’s old Marines brothers are taking divergent paths toward dealing with their respective trauma, and several of them seem set to become big bads Frank will have to defeat. The villains and targets of the Punisher’s vigilantism thus far have almost all been military-industrial complex figures, that is aside from an early episode involving some construction workers and gambling mobsters. Frank’s moral code has remained steadfast. Episode 7 goes out of its way to point out Frank’s apprehension about a mission which might entail harming or killing innocent soldiers who are simply trying to do their job.

There is definitely bloat. The season, for example, takes too long to put Frank and Micro together, and once they are together there are at least two too many scenes of Micro mournfully keeping tabs on his wife and kids through the secret cameras he’s hidden throughout their house.

Frank and Micro are an engaging pair, though, an especially important distinction since for a series built around Frank Castle to work he needs to be surrounded by people who will either do a lot of the talking and/or can engage with him enough to drag the dialogue out of him. The two cohabitate in a bunker together since the whole world thinks they’re both dead, which proves to be the perfect set-up for surprisingly delightful odd couple bickering. Except, you know, they also talk about death and their respective failure as fathers. So, it’s not all laughs, nor should it be. 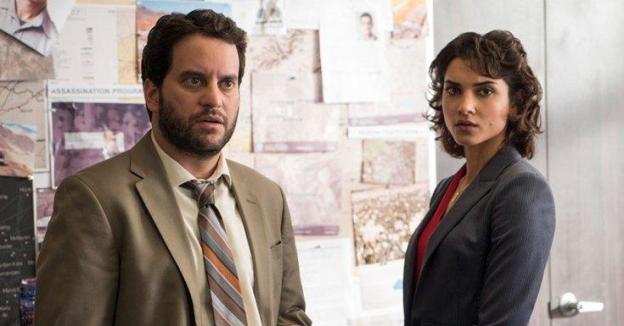 Outside of that central pair, Amber Rose Revah shines as DHS agent Dinah Madani. She’s sort of this show’s version of Luke Cage’s Misty Knight in that she is a fierce law enforcement officer operating on the margins of the narrative, stuck in a constant game of catch-up with the audience (though nowhere near as egregiously as poor Misty). Spoiler, she too ends up sleeping with someone she’ll eventually have to investigate. Her Iranian-American status and pursuit of justice for a tortured and ultimately murdered military ally, executed on tape by a group of masked U.S. soldiers, vaguely evokes Abu Ghraib and gives Dinah’s journey a real-world resonance. It’s like they dropped a Homeland storyline into a Marvel show, and I’m surprised how well it works.

Those familiar with the comics won’t recognize her, though. She was created for the show. In fact, those familiar with the comics, particularly the Garth Ennis run, might be disappointed with the first half of the season altogether. There is more Frank Castle than Punisher on display, and rather than take an over-the-top, 80s action movie approach to the violence and drama the show takes itself very seriously. It does, of course, occasionally erupt into outbursts of extreme violence, like when Frank is forced to decimate a death squad of soldiers sent after him in the woods, but thus far the most haunting image I’ve seen is a PTSD-addled soldier building a foxhole in his father’s backyard in a failed attempt to psychologically return to a world that makes sense to him.

Where it goes from here, I don’t know, but what I’ve seen is a brutal and surprisingly sensitive look at what happens when soldiers return home from wars no one wanted to a country overrun with corruption and let down by a citizenry with short memories.

What about you? Where are you with Punisher: Season 1? No spoilers, please.