1922 is the story of what evil men might do when pressured by both family and larger economic forces to change.

Thomas Janes plays Wilfred James, a Nebraska farmer who oddly talks more like he’s never ventured north of the Mason-Dixon line and dresses as if the local co-op had a clearance sale on denim. The land he tills actually belongs to his wife, Arlette (Molly Parker), who inherited it from family and is desperate to sell it to a sharecropper. She wants to use the money from a sell-off to move to Omaha and open up a dress shop. She also wants a divorce and insists on taking their 14-year-old son Henry (Dylan Schmid) with her. Wilfred just wants to keep farming and will not stand for any woman trying to take his son away from him. So, he manipulates his son into helping him kill Arlette. 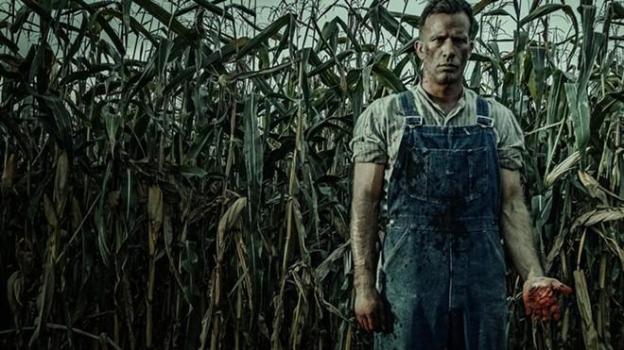 That covers roughly the first third of 1922. The rest of the film, all of which is narrated by Wilfred via a letter admitting his crimes, concerns itself with the inevitable cover-up effort and gradual mental and spiritual deterioration of the perpetrators of such a heinous deed. Because it’s all based on a Stephen King novella, you automatically expect there to be a supernatural twist, perhaps some familiar variation on Pet Sematary or Sometimes They Come Back. What ends up happening, though, has more in common with Edgar Allen Poe’s Tell-Tale Heart. An increasingly guilt-ridden Wilfred starts seeing strange things and can’t quite shake a rat infestation in his house, the hairy rodents having apparently developed a taste for human flesh after dining on poor Arlette’s corpse. Is this going to turn into a game of human vs. hungry rats? Or do the rats simply act as a harbinger of Arlette’s inevitable return?

1922 isn’t exactly in a hurry to answer those questions. In fact, 1922 is never in a hurry to do anything. It’s a slow, methodical movie which, at 101 minutes long, feels like it’s trying to milk just a little too much out of what is really a novella-length story. As such, the most crucial scenes might just be the occasional drop-ins with Wilfred in 1930 as he writes his confession in an Omaha hotel room. There, he acts as if he’s being hounded by some unseen force piling up outside his door or trying to get to him through the ceiling. Thus, before we know for sure what twists await Wilfred in 1922 we know that by 1930 it has him in a last-will-and-testimony frame of mind.

That element helps 1922 maintain at least some sense of narrative urgency, but that’s never the primary goal. Instead, this is a drama dressed in a horror movie’s clothing, depicting a truly horrible murder and watching as some kind of curse or perhaps an epic run of bad luck continually punishes the father and son who had the audacity to murder an innocent woman. Mix in an undercurrent of Steinbeckian, Grapes of Wrath-esque commentary on big businesses buying out small farmers and you have a film which fascinates more than it titillates.

Not scary. Kind of slow. A bit too much of Thomas Janes doing his mockable version of a 1920s accent. Yet 1922 still registers as watchable for genre fans due to its admirably bitter heart and a healthy helping of atmosphere. It’s the lesser of Netflix’s two Stephen King adaptations this year, though. Watch Gerald’s Game first. If you like it, then give 1922 a look.

1. I wonder if Stephen King named him “Wilfred” as an Easter Egg for Willard fans, what with the rats and everything.

2. Two cows are mercy-killed in this movie, and I found it far more upsetting than I would have expected.

3. When Thomas Jane actually tries, as he does here, he can be a good actor.

4. Do NOT watch the trailer. It gives away the entire movie.