Vulture says this year’s Oscars race will come down to which movies feel like they speak to and can potentially even change the modern world in some small, but profound way. An industry that has sacrificed the moral high ground thanks to #OscarsSoWhite and Harvey Weinstein needs to stand up and prove it can do more than discriminate against minorities, harass women and crank out blockbusters. Putting the best, most socially conscious foot forward on Oscar night is one way to do that, and thanks to films like The Florida Project and Get Out there are plenty of worthy candidates.

Downsizing would thus seem to be the perfect movie for the moment. It has an awards-caliber cast (Matt Damon, Christoph Waltz, Kristen Wiig, Jason Sudeikis) and director (Alexander Payne), and uses a high-concept sci-fi premise to comment on environmentalism, class warfare, empty-headed American consumerism, refugee living, and health care scarcity. It feels like the work of a Midwestern man (Payne was born in Nebraska) who has had his eyes opened to and heart softened by the plight of the ostracized, economically disadvantaged “other.” So, he’s made a movie about a perfectly normal, nice Midwestern man (Damon plays a Nebraska-based occupational therapist) who shrinks himself in search of upward mobility but experiences only loneliness and spiritual ennui before an encounter with a Vietnamese refugee completely changes his worldview. 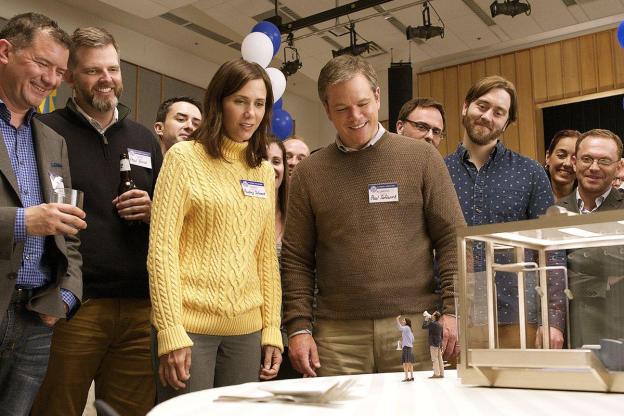 So, what gives? Why has Downsizing been almost completely ignored by SAG, The Golden Globes, WGA, and Critic’s Choice Awards?

Obvious answer: it’s just not a good enough movie to register with voters.

Longer answer: it tells a mildly enjoyable story that oddly thinks too small and features a performance or, more accurately, an accent which is among the most divisive in any movie this year. The whole thing feels like a solid idea paired with a decent first draft of a script that unfortunately went straight to set instead of undergoing any of the absolutely necessary rewrites.

For example, rather than opening on our main characters and maybe using montage or background TV footage to explain the premise we open with an overly long prologue tracking the five year journey from the time when Norwegian scientists successfully shrunk their first mouse (with the procedure referred to as “downsizing”) to when they unveiled their pilot study featuring over 30 shrunken humans, including the lead scientist and his wife (the trick photography used to make people look small never quite works as well as it should). A montage of different people around the world reacting to this news finally settles on Damon watching a news report about it in a bar while picking up food for his sick mother.

We don’t know it right away, but his mother spells out the theme of the movie when she dismisses talk of “downsizing” as a way to save the environment and cut down on consumption and overpopulation by loudly proclaiming, “Scientists can shrink people, but they can’t cure my fibromyalgia? I can’t breathe. I’m in pain. Doesn’t that matter?” Damon, preparing her medicine, quietly responds, “A lot of people are in pain, mom, in a lot of different ways.”

His pain, we quickly learn via a 10-year time jump to a time when his mother is long since dead and he now lives in her redecorated home with his wife, is one of stifled ambition and economic stasis. He wanted to be a doctor but had to abandon medical school to care for his mother and seek work as an occupational therapist, and now has a wife who wants to move into a house they can’t afford. Downsizing and living in a perfectly safe, timeshare-like enclosure in New Mexico becomes an attractive option for them since the reduced scale of small living lowers the cost of everything, converting $100,000+ in savings and federal tax credits into $12.9 million. Plus, ya know, they get to help the environment.

The mission of the movie from this point forward is to hold up high minded ideals about saving the environment, undercut them with a satirical slant on humanity’s natural inclination toward greed and self-interest before ending on a debate about saving the world versus saving the people in the world. It reads like the film equivalent of a thinkpiece criticizing those who would prioritize larger, more nebulous concepts over more immediately pressing matters like caring for the sick and feeding the hungry.

That last part comes into play when, as spoiled in the trailers, Wiig backs out of the procedure at the last minute, and abandons her newly shrunk husband to a soul-crushing life he only sought out because he thought it’s what she wanted. After wallowing in self-pity for a year, he meets Ngoc Lan Tran, a Vietnamese activist who was famously shrunk by her government against her will, lost a leg in the process, and is now reduced to working as a cleaning lady for people like Damon’s debauched, amoral, gregarious upstairs neighbor (Waltz, over the top as always). When Damon notices Tran’s clearly inadequate prosthetic leg, he offers to help but ends up getting pulled into her life where she lives in an area so poor and isolated he didn’t even know it existed. She changes the world the only way she can, through helping the poor around her, and Damon realizes just how privileged he’s been.

Tran, as played by Hong Chau, has thus far been the sole element of the film to be deemed awards worthy. She’s already been nominated by SAG and the Golden Globes and might just get an Oscar nod as well. It has not come without controversy, though. As scripted, Tran speaks in broken, pig English, and is so boldly unafraid in everything she says and does (e.g., she repeatedly calls Damon “stupid” in the funniest way possible) that we laugh at her before sympathizing with her after she slips into unexpected monologues revealing how much pain she’s suffered. It is a moving, funny, uplifting performance…if you can get past the accent.

At Tribeca, Variety said Chau’s work “entered problematic territory for many as some have noted that its broad strokes veer into the realm of stereotype.” ScreenCrush called Ngoc Lan an “icky, racist caricature.” AVClub came down just as hard, “Payne plays the character’s pidgin English for broad, borderline racist humor, while also supplying her with not one but two bathetic tearjerker monologues. It’s the filmmaker’s worst impulses manifested in a single stereotypical figure.”

Chau, who was born in a refugee camp in Thailand after her Vietnamese parents fled their homeland under risk of death, has repeatedly defended the accent, most recently telling IndieWire, “I grew up around Vietnamese refugees, around people who don’t speak English as a first language. It is a heightened character, it’s not a documentary, I wasn’t pulling directly from any one person. The character isn’t just the accent, it’s also everything that she is saying.”

What Ngoc Lan is saying throughout the film is not too horribly dissimilar to other white savior narratives where a supporting character of color has to tell the white lead how bad it is for non-white people and how much more they could be doing to help. However, [spoiler] Downsizing is not so full of itself that it then has Damon use her advice to save the persecuted and battle the wicked. Instead, he learns the central lesson his mom was getting at near the beginning: Other people’s pain matters. What is the right thing to do in 2017? Help those you can, according to Downsizing’s big-hearted sci-fi parable.

It is a perfectly lovely message, but it’s one which feels half-baked and somewhat obfuscated by Chau’s divisive accent (which I ultimately adjusted to), an undercooked script, and a general aimlessness as to what to do with such big, small ideas. That being said, there is still a visual inventiveness on display (like tiny ships hauling Smirnoff Ice bottles across Norwegian waters) and an ultimately good heart behind the whole affair which makes Downsizing a watchable movie, even if you leave it knowing it could have been so much more.

A first draft of a perfectly solid movie that somehow ended up being made without any of the necessary rewrites to fine-tune the central ideas, streamline the world-building, and come to a clearer conclusion on its debate about finding the right thing to do in a world which seems irreparably broken in so many ways.