Take True Romance/Pulp Fiction-era Quentin Tarantino. Toss him in a blender with early Wes Anderson and Oliver Stone’s Natural Born Killers. Add in a bit of Richard Ayoade’s uniquely British Submarine. And then flip all of that slightly on its head to actually incorporate a female point of view.

That’s how you get The End of the F***ing World, Netflix’s new black comedy about a teenaged, aspiring serial killer (a compellingly restrained Alex Lawther) going on a road trip with his intended first victim/loudmouthed girlfriend (a revelatory Jessica Barden). Adapted from Charles Forsman’s graphic novel of the same name, World premiered on Channel 4 in the UK last October and just dropped on Netflix everywhere else in the world this past weekend. It now fully deserves to be the first show you binge this year. From its very first moment, World confidently announces itself like a shotgun blast to the face and never lets up, calling to mind so, so many indie movies of decades past. Just better.

Here’s the trailer, and almost everything that happens in it is from the show’s first 2 episodes (out of 8 total):

As showcased there, from beginning to end the story is told from Alyssa and James’s alternating points of view, often to darkly comedic effect. She’s the combative girl who smashes her cell phone rather than sit any longer at a school lunch table surrounded by kids obsessively texting; he’s the taciturn, self-diagnosed psychopath who sits by himself observing and scouting potential first victims. She can’t stop talking and yelling at the world even though her inner thoughts reveal a hidden vulnerability; he can barely be bothered to talk at all and never raises his voice even though his inner thoughts reveal disturbing tendencies. Neither party is satisfied with their home life, with Alyssa on the verge of trauma (her step-dad is probably just days away from trying to molest her) and James forever running from some undefined trauma in his past (something involving his mom). In short, they’re perfect for each other.

As their respective voiceovers tell us, at first James is just the blank canvas for Alyssa to project all of her hopes onto, and she’s exactly the kind of tempestuous girl he can talk himself into wanting to kill. There’s also a certain pragmatism to their union. Alyssa does, after all, hilariously follow up her “I kind of thing I could fall in love with him” about James in the first episode with “Also, he has a car.” Over time, though, their bond deepens into something oddly heartwarming, and a show which began as an enjoyable, but undeniably twee indie homage turns into something you can’t stop watching, particularly after the third episode throws away what you expect to happen and steers in a completely different direction.

Frequently, James and Alyssa admit through their voiceovers that they’re simply reacting to situations according to what they’ve seen in movies, which is fairly apt considering how much show creator/director Jonathan Entwistle, writer Charlie Covell (who has turned to writing after a career as an actress), and co-director Lucy Tcherniak seem to be wearing their influences on their sleeves. Ricky Nelson’s “Lonesome Town,” for example, makes a prominent appearance presumably because of its similar usage in Pulp Fiction. By the end, James and Alyssa are kind of dressed like Christian Slater and Patricia Arquette in True Romance.

However, what elevates this above a simple Tarantino riff is, as Jen Chaney put it in her review, when the plot turns and shit starts to get real the teen protagonists “wake up to the fact that there’s more to their lives than empty subversiveness.” A show which could otherwise have been a simple celebration of crime, black comedy and pulp quickly grows to function more as a “wake-up call about how quickly things can get scary, and how quickly you can lose your sense of self when you act purely on impulse.” Moreover, there’s something about seeing this through British eyes (Alyssa at one point deadpans “If this were a film we’d probably be American”) which gives it a renewed energy. 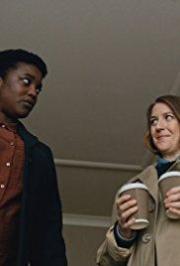 If there’s a weak link here, it might be the subplot putting the two cops (Wunmi Mosaku and Gemma Whelan from Game of Thrones) investigating James and Alyssa into their own side TV show in which they’re a will-they-won’t-they duo who finally went there and don’t know to move forward. The fact that they’re lesbians certainly lends it an air of encouraging progressiveness, and they do effectively function as differing mouthpieces for how much sympathy we’re supposed to feel for our protagonists. However, any minute not spent with James and Alyssa is almost, though not quite, a minute wasted due to how thoroughly Lawther and Barden command the screen.

If this was the 90s, World would be a hip indie movie making major waves at Sundance, getting instantly scooped up by Miramax for millions, and setting up its directors for a solid decade of impressive work, with probably a failed dalliance or two with the mainstream. But this is 2018, and for World’s unabashed celebration of those kinds of 90s movies to work, it has to also offer something new and relevant to the mix. Thankfully, it does that by asking what if halfway through a clever Tarantino story or darker-than-usual Wes Anderson script the movie we were watching suddenly developed a conscience and delved deeper into its endearingly complex characters while still managing to seem, well, cool as fuck.

So, at a mere 3 hours long The End of the F***ing World should be one of the easiest binge choices of the year.

What do you think? Have you binged The End of the F***ing World yet? Still on the fence? Turned off by the Tarantino aesthetic? Or super intrigued by it? Let me know in the comments.