Once a minor genre meant for just B-movie fans and drive-in devotees, horror expanded and thrived in the seventies. Suddenly, and in stark contrast to the more monolithic nature of the slasher-dominated 80s, the seventies saw the rise of horror stories where everything from children to sharks to ghosts to even truck-drivers could be a source of supernatural fear and menace. And rather than leave the gold rush to the independents, the big studios looked to cash in as well.

Thus, 20th Century Fox’s The Omen, a spiritual sequel to Rosemary’s Baby that dramatizes not giving birth to the Antichrist but instead the puzzling experience of being a parent to a five-year-old version of him. As I argued in my review yesterday, The Omen stands up surprisingly well for a movie that’s already passed its fortieth anniversary. At the time of its release, The Omen, along with films like The Exorcist (1973), It’s Alive (1974), and Carrie (1976), signaled a time of great societal transition, “of growing doubts about the sanctity of the nuclear family and its role in society,” as Martin Sutton argued in Movies of the Seventies. Today, it’s social relevance is forgotten and enjoyment tied more to its Earthly charms, namely the still-astounding death scenes. Poor, poor David Warner.

As horror aficionado Kim Newman put it, “If there was a special Madame Defarge Humanitarian Award for All-Time Best Decapitation, this lingering, slow-motion sequence would get my vote.”

But what of the equally intricate and gory elevator death in Damien: Omen II? Why does nobody talk about that one? In fact, why are the sequels generally ignored altogether?

Because they’re not as good. Duh.

Producer Harvey Bernhard, who conceived of the original Omen as a way to capitalize on The Exorcist’s record-setting box office success, originally wanted to make three sequels charting the rise and eventual fall of Damien, the Antichrist. Original Omen director and writer Richard Donner and David Seltzer didn’t join him on the journey. So, Bernhard, with a script from Stanley Mann, hired Mike Hodges to direct, later replacing him with Don Taylor. The resulting film, Damien: Omen II, doubled the first Omen’s budget while earning less than half than it at the box office. Not exactly a recipe for success. So, the quadrilogy was turned into a simple trilogy, with Bernhard finishing things off with 1981’s Omen III: The Final Conflict, which again featured a new writer (Andrew Birkin) and director (Graham Baker).

All three films are currently available to stream on HBO Now, and since The Omen has always been one of my horror history blind spots I binged the entire franchise over the past two days. Not surprisingly, it’s a real study in diminishing returns. The formula of the original is repeated to satisfying results in the second film, but by the time you get around to the third chapter in the trilogy the horror is long gone, largely replaced with Sam Neill shouting “Nazarene” so often you can make a drinking game out of it. 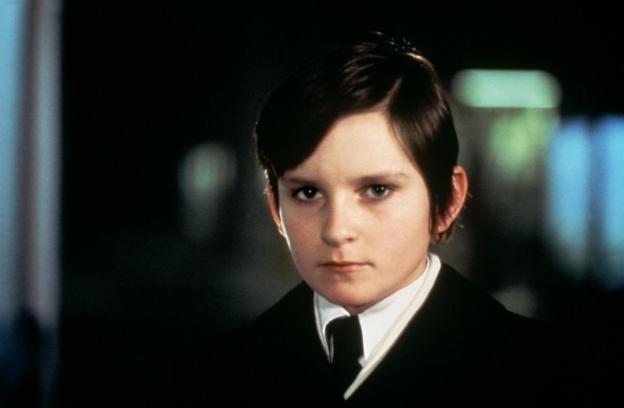 Damien ages its title character up to a 12-year-old (played this time by Jonathan Scott-Taylor) who has been taken in and raised by his uncle Richard (William Holden) and aunt Ann (Lee Grant). He still doesn’t know he’s the Antichrist, and he’s still surrounded by acolytes grooming him for his ascension to power. Animals and unseen forces still descend on any who stand in his way, and his parental guardians still take too long to put everything together and plot his destruction.

It’s not dissimilar to watching any other horror sequel which just wants to give us more of the same with minimal variation, and in this case since the calling card of the first Omen is its death scenes Damien does its best to try and top them. Some scenes, like the aforementioned elevator sequence where a doctor who has just discovered abnormalities in Damien’s blood is literally cut in half by elevator cables, absolutely deliver. Others, like when someone choking to death looks no more convincing than when a 7-year-old feigns a melodramatic death while playing with friends, not so much.

The substantive departure from formula is simply that halfway through the film Damien finally learns who he actually is, which should logically be one of the defining and most dramatic moments in the franchise. It’s not. He reads the Book of Revelations, runs into the woods yelling “Why me?”, and then just moves on with it, quickly deciding that being the son of the devil is a bit of alright. Even when he later hesitates to kill one of his enemies, it’s more of a “Why can’t you just be cool with me being the son of the devil?” situation instead of “I don’t want to be this.”

Still, this steers the franchise into a more explicitly supernatural territory and finally makes Damien a party to all the death, even if all he ever really does is stare quite intently at people right before an out of control machine here or mysterious fire there sends them to an early grave

There are those who actually prefer Damien to Omen, and I can certainly see why. The international conspiracy aspect of the first film is better defined and realized in the sequel, with multiple key side characters, most notably one played by Lance Henriksen, intervening to steer Damien down an evil path. The way Damien flourishes at a military school is especially chilling, suggesting in one memorable montage the stunning ease he might someday display in leading an army. With the “yep, he’s the Antichrist” reveal from the first film finally out of the way, Damien is free to have a bit more fun with it and fully lean into its one-new-death-every-10-minutes formula. Beyond all of that, the ending standoff between Holden, Grant, and Damien has a nice twist I didn’t see coming.

But William Holden, a legend in his own right, isn’t Gregory Peck, and neither Mike Hodges nor Don Taylor is Richard Donner. Moreover, there is something scarier about an almost entirely silent child causing mayhem and not entirely realizing he is than a 12-year-old learning how to exercise his immense power for destruction. Still, the separation between Omen and Damien is not as wide as some people might think.

The Final Conflict, however, has far fewer defenders. It remains notable all these years later mostly because it’s a real hoot to see Sam Neill delivering an evil soliloquy to a life-sized crucifix and a sermon on the mount where he instructs his devoted followers to go kill a bunch of innocent babies. As the first film to focus on an adult Damien fully aware and accepting of his powers, there are many directions The Final Conflict could have gone, but it mostly limps along and rides on the strength of Neill’s memorable performance.

The plot again takes a significant time jump, aging Damien up to 32-years-old. He’s been running the family company for years and is already friendly with the President of the United States, who happily breaks the law and breaks some promises to grant him an Ambassadorship to Britain, the same position Peck held in the first film. Plus, Damien also wins control of a United Nations youth group to use for his own nefarious purposes.

As the story progresses, he grows closer to a popular TV host (and her son) after appearing on her show. At the same time, he has to dodge a series of assassination attempts after a group of priests somehow found their way to the same old daggers people kept trying to use in the first and second film.

The priests want him dead because, well, he’s the Antichrist. That’s reason enough. But they’re extra motivated this time because the star alignments suggest Jesus’ second coming is nearly upon us, and Damien knows that. He races to claim as much power as possible and to snuff out the competition, which is where his seemingly endless “Nazarene” references come from. He just really, really doesn’t like the idea of God’s son coming back and screwing everything up for him, but he only has a date and a region of the world as a clue for where Jesus might be reborn.

This leads to a Godfather style montage of a series of hits, except instead of mob bosses being offed in quick succession its innocent little babies. Of course, that’s a red line Omen III doesn’t want to fully cross, meaning the closest we come to seeing a baby being directly murdered is when a runaway stroller is hit by a car. Everything else is simply suggested. Still, the idea of what’s happening off screen is plenty dark enough.

The rest of the film is comparatively lacking. Apart from an intricately staged suicide near the beginning, the death scenes come off rather uninspired. Any pretense of horror, at least horror that’s meant to scare us, is largely in the rearview mirror as the franchise simply winds up to its inevitable biblical conclusion. But even that proves disappointing. After three films of supernatural forces Final Destination-ing everyone out of Damien’s path, [spoiler] he ends up being defeated in the most mundane way and never does get the battle with the Nazarene he so desired.

Granted, it’s hard to build tension when it sure as heck seems like our final battle is coming down to a grown ass Sam Neill and a baby, but what Final Conflict does with it is, to quote Damien from the start of the film, “trite, cliched, inane.”

Kim Newman once said, “Rosemary’s Baby is a film; The Exorcist is a phenomenon; The Omen is a package.” Some might reject characterizing The Omen as being the more commercially-motivated Friday the 13th to The Exorcist’s Halloween, but by the time you reach the end of the trilogy you see the truth in it. The Omen was made to replicate another film’s success, not just The Exorcist but also Rosemary’s Baby. Once it became a hit on its own the producer cranked out a largely copycat sequel, and when that fizzled at the box office a final installment actually dared to change the franchise storytelling formula and realized it had no good ideas without it.

That leaves us with a horror trilogy which is quite similar to any other film trilogy – a pure first film burdened with setting everything up, a bigger sequel that aims to replicate the formula of the first one and have a bit more fun with it, and a disappointing finale which is recommended for completists.

That being said, I wouldn’t say any of the films in the trilogy are actually bad. The Omen’s a stone cold classic, Damien a somewhat underrated sequel, and even The Final Conflict rates as a watchable 2.5 out of 5 stars for me.

All four original Omen films, including the 1991 TV movie spin-off, are currently available on HBO Now.