No one understands the cynical, selfish drives of the political leaders who represent us better that Armando Ianucci. Best known for the series The Thick of It and Veep, he presents a political maelstrom of sniveling, ambitious subordinates, all serving at the whims of those above them or shifting political opinions. His is a world in which one laughs and winces in equal measure. That ratio of grimaces to guffaws may be at its most precariously balanced in his newest film, The Death of Stalin. Based on a graphic novel and centered on the death of the titular paranoid, megalomaniacal dictator and the chaos and scheming that followed his demise, Ianucci gives us a world in which political minutia is played for laughs while individuals are tortured and killed in the background.

The Death of Stalin opens on a live radio broadcast concert. Just as the performance ends, a call is made. Stalin wants a copy of the broadcast. With the sinking realization that there is no recording, the remaining audience members are forbidden from leaving and another conductor is roused from his bed. The assurances that no one is going to be murdered are uttered with a laugh that borders on hysterical panic, making the claim seem dubious at best.

With this opening, the tone is established: Everyone in Russia is living in sustained terror, subject to the whims of a mad man who might laugh at your joke or order your execution. A Committee of underlings, including NKVD head Beria (Simon Russell Beale), Moscow Party Head Khrushchev (Steve Buscemi), Deputy General Secretary Malenkov (Jeffrey Tambor), and Foreign Minister Molotov (Michael Palin) flank him. They too exist with a perpetual state of worry that something they say will land them in prison or in front of a firing squad. Khrushchev even goes so far as to write down every joke he told and Stalin’s reaction, in order to determine what he should say at their next meeting. Little moments like these are sprinkled throughout The Death of Stalin’s opening scenes, depicting the dark, absurdist humor that comes from living in a world in which you could be executed for slightest offense.

However, much as the film’s title indicates, Stalin suffers a cerebral hemorrhage. He’s left on the floor for hours because his guards are too terrified to check on the thud they heard from within his room (“Should we investigate?”/ “Should you shut the fuck up before you get us both killed?”), and his Committee refuses to move him until they can vote and reach a consensus. 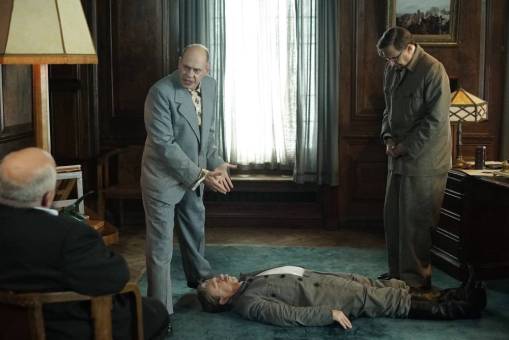 Finding a competent doctor is impossible, because Stalin ordered most of the city’s doctor to be locked up or executed, and Russia’s ruler is tended to by a cadre of medical students and long-retired medical professionals. His children, the childlike Svetlana and the deranged Vasily (Andrea Riseborough and Rupert Friend) are called to be by his side, and become political pawns at the mercy of more conniving individuals. 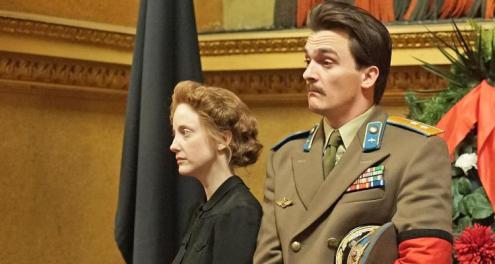 Following a brief period of unconsciousness, Stalin passes away and his Committee is left behind to jockey for position.

Finding a hero in the despicable crew is a futile endeavor, but Buscemi’s Khrushchev emerges as the least terrible of the bunch. Meanwhile, the ruthless Beria steps forward as an early victor, undertaking many of Khrushchev’s plans for reform and implementing them as his own. “You’re the good guy now? You locked up half the nation,” Khrushchev asks incredulously. “Yes, and now I’m releasing them” is Beria’s smooth reply.

Khrushchev exhibits minimal interest in taking power, but is so horrified by the thought of the spineless, incompetent Malenkov functioning as the face of Beria’s puppet regime, he works to find some way to wrench power away from them. If the film has a villain (or someone who is more villainous than every other villain on screen), it’s Beria.

In reality, he was more than likely a pedophilic rapist and murderer, and the film’s portrayal of him is about as flattering, and it’s easy to root against him and root for Khrushchev. Everyone else is a mixture of political scheming, dimness, and extreme cowardice. It’s only when Georgy Zhukov (a fantastically raging Jason Isaacs) arrives on the scene that we have a character who registers no sense of fear or worry, spitting into the faces of those he finds unworthy of his time.

The cast is uniformly strong, with Buscemi and Beale emerging as the obvious standouts. Ianucci allows his well-assembled cast the use of their natural accents, so Buscemi’s Khrushchev speaks like he’s from Brooklyn amongst various British and American accents. The linguistic cacophony works in the film’s favor, as it keeps actors from having to worry about maintaining an accent that would sound unnatural and reinforces the idea of a world in which no one is really speaking from the same place.

It should come as no surprise to anyone familiar with Ianucci’s work that The Death of Stalin is gloriously, beautifully profane. Trying to keep track of the film’s best dialogue is pointless, because as soon as you’ve noted one perfect line, three more follow it. My personal favorite, though: “I’m the peacemaker, and I’ll fuck over anyone who gets in my way.” The film, however, is not as funny as its trailers make it out to be. It’s definitely laugh-out-loud funny, but with moments of torture and executions that temper the political absurdities. Like the best political satires, if the situations weren’t played for comedy, they would be unbelievably tragic.

I’ve tried to avoid our current political landscape when discussing The Death of Stalin. However, for a film in which political leaders create their own political narratives and deride realities that conflict with that view as falsehoods, it’s almost impossible to miss Trumpian parallels. Add in a vengeance-minded ruler around who other tiptoe for fear of incurring his wrath, and the film basically becomes a too-late warning against the man currently residing in the White House. The film could be read as simply a political satire with no contemporary targets, but anyone with the predilection to do so will have no trouble seeing the present-day parallels. Ianucci presents Stalinist Russia as a world in which pandemonium and alarm yield chaos when its leader is no longer steering the ship.

In the end, The Death of Stalin is a film of chaos and plotting in the power-vacuum that results when a crazed, power-hungry despot is no longer in power. It should come as no surprise to anyone with a knowledge of 20th Century history that Khrushchev ultimately takes up the mantle of Russian ruler, until he too was plotted out of office by another schemer in the shadows. That’s the problem with power. There’s always someone waiting to usurp you. Ianucci recognizes the absurdity of grasping for authority and jockeying for position, and in doing so, he has created a Dr. Strangelove for our troubled times.