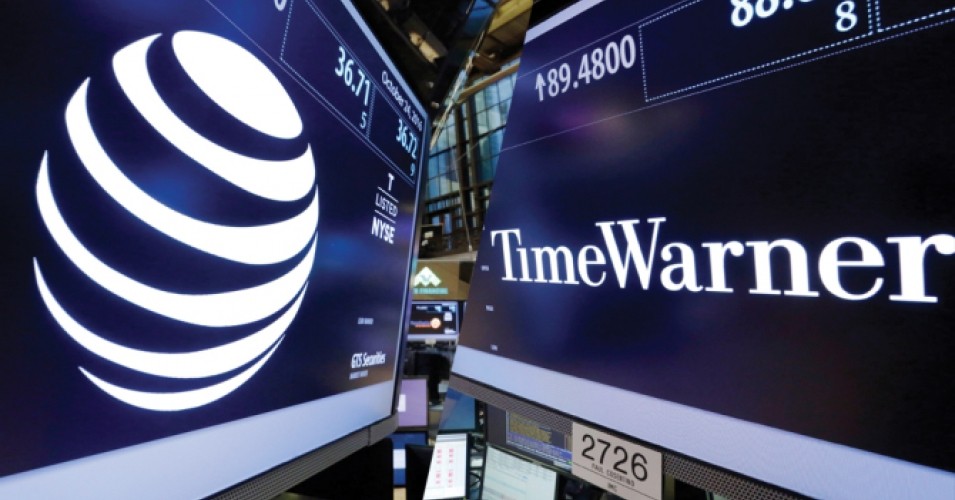 Or at least that’s the case with AT&T’s newly approved acquisition of Time Warner. Allow me to explain it to you in the key of Terry Cashman’s “Talkin’ Baseball” or, more accurately, The Simpsons’ “Talkin’ Softball” parody

Well, Mr. Stephenson had done it

His telecommunications giant had won it

With Donald Trump squawking all the while

The DOJ’s dickishness in court made us smile

While Judge Leon brought an end to the trial

From AT&T to Time Warner

From Comcast or Disney to Fox

DOJ: Actually, I think we might appeal this ruling.

Oh, damn. That really messes up the flow of the song. Let’s put in a pin in that for now. In truth, as of this writing, the DOJ has not formally appealed the ruling. Their lawyers on the case have kicked the dirt in frustration and flashed ugly faces at AT&T CEO Randall Stephenson and Time Warner in anger, sure, but they haven’t officially moved to put a stay on the ruling. Lacking that, AT&T and Time Warner will officially merge a week from now (6/18), thus initiating a likely run of media mergers and acquisitions on a scale and volume we’ve never seen before.

It’s not just that Judge Leon approved the deal and rejected the DOJ’s argument that combining the second largest telecommunications company and the biggest pay-TV provider with one of the country’s leading film and television studio will be bad for consumers; it that’s he approved it all without conditions. Time Warner doesn’t have to sell CNN or other cable properties to slim down; AT&T doesn’t have to sell DirectTV. Nope – everything’s even Steven.

So, following in the ancient legal tradition of “if it was okay in that other case, it should be for us as well” Comcast will officially outbid Disney for parts of 21st Century Fox in 24-48 hours, Verizon and Dish will start shopping for media companies, and Lionsgate, as well as Sony, will suddenly have plenty of new suitors. Any idle talk we’ve had in the past about Apple or Amazon buying a Hollywood studio has to become deadly serious. Merger mania is here, and AT&T and Time Warner’s survival-of-the-fittest argument, as explained below by Deadline, is set to become everyone’s legal playbook:

That the only way for a media company to survive in an environment increasingly dominated by technology giants is by combining movie studios, TV channels, distribution and data into one corporation.

But, why is this happening? According to The Globe, $816 billion worth of company consolidations/mergers have been announced in the United States through May, a 71% percent increase from a year ago.

The reason: Companies need growth, and buying other companies remains one of the fastest and most effective ways to achieve it. Despite recent interest rate increases by the Federal Reserve, borrowing the vast sums of money needed for deal-making remains cheap by historical standards.

As for why exactly it’s hitting the media industry so hard, the answer is simple: tech disruptors. Everyone’s terrified of Amazon, Apple, and Netflix’s collective assault on cable, and Facebook and Google are soaking up all of the ad dollars. That directly targets both of the revenue sources for traditional TV companies. 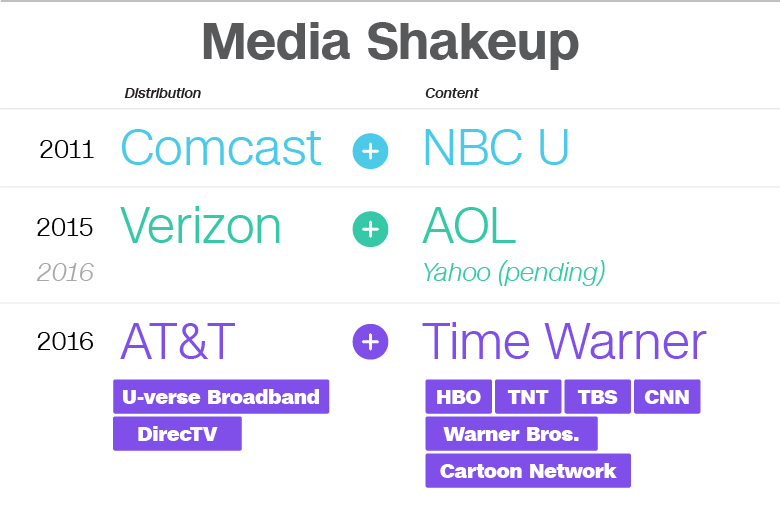 So, if Netflix triumphs by going direct to consumers with its own content AT&T can follow suit by now owning all of the content on HBO, Cinemax, CNN, TBS, TNT, truTV, TCM, Cartoon Network, The CW (well, technically CBS still owns half the network) along with any and all movies made by Warner Bros. Moreover, Disney can gobble up all of Fox’s assets to both boost Hulu, which it would become a majority owner of, and prop up its forthcoming streaming service/aspiring Netflix-killer.

Isn’t this usually a bad thing for consumers, though? Merging companies always swear this will be better for business and thus for consumers, and then they raise prices because, well, there’s not as much competition anymore. Look at what happened when Comcast bought NBC/Universal. They said they wouldn’t withhold NBC programming from rival cable companies or other competitors, but that’s exactly what they’ve allegedly done.

That puts us into tricky territory. Many viewed the DOJ’s fight against AT&T/Time Warner as being politically motivated, with Trump argued to be targeting Timer Warner as a way to punish CNN. However, that doesn’t actually mean his DOJ was necessarily wrong to fight this merger. As the WGA West argued in a statement protesting the ruling, “Today’s decision is a blow to consumers, content creators and competition. The WGAW knows too well the harms of vertical mergers and welcomed the DOJ’s efforts to block this one. Unfortunately, a combined AT&T-Time Warner, like so many mergers before it, will lead to higher prices and fewer choices.”

Furthermore, as former FCC commissioner Michael Copps said in a statement: “With the recent repeal of net neutrality, AT&T now has the ability to block or throttle any online content that competes with Time Warner programming.”

Still, this is a free-marketers dream. This ruling, as The Wall Street Journal pointed out, effectively “pushes the government to the sidelines and encourages media, tech and telecom companies to find partners to compete against Silicon Valley.” If the big tech companies represent a clear and present danger to traditional media, it’s up to the market to consolidate and fight back.

We just might be the ones left paying the bill.

A Quick Refresher On Who Currently Owns the Major Hollywood Studios: