Earlier this year, I addressed one of my big cinematic blind spots by finally watching David Cronenberg’s Videodrome. While I enjoyed it, I didn’t intend to go even further back and check out any of Cronenberg’s earlier films I haven’t seen. After all, what can really top Videodrome? But then Rabid showed up on Shudder’s The Last Drive-In With Joe Bob Briggs. It’s…well…it’s no Videodrome.

David Cronenberg’s Shivers, about a luxury apartment complex overrun by parasitic organisms turning everyone into bloody sex monsters, did not go over particularly well with the Canadian government upon its release in 1975. The Canadian Film Development Corporation, a tax-funded government agency, had partially funded the film, which led the critic Robert Fulford to headline his review in the national magazine Saturday Night: “You Should Know How Bad This Movie Is, You Paid For It.” 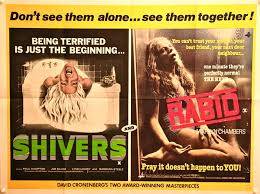 Fret all you want, Fulford, but that’s clearly a damn good investment. So, Cronenberg, Cinepix, and the Canadian Film Development Corporation were at it again two years later with Rabid, another disease outbreak story with heavy sexual undertones

As luck – or plot convenience – would have it this accident happens to occur mere miles away from a plastic surgery clinic. The doctors there are Rose’s only hope as her lower abdomen injuries are so severe she won’t survive a trip to the nearest hospital. As with Shivers, an experimental medical procedure occurs and ends up going very, very wrong. Rose is saved via transplanting part of her thigh to her abdomen so that new skin might grow, but she awakes with an overwhelming need to feed on humans.

When I say “overwhelming need to feed on humans” you think you know how that’s going to play out, right? 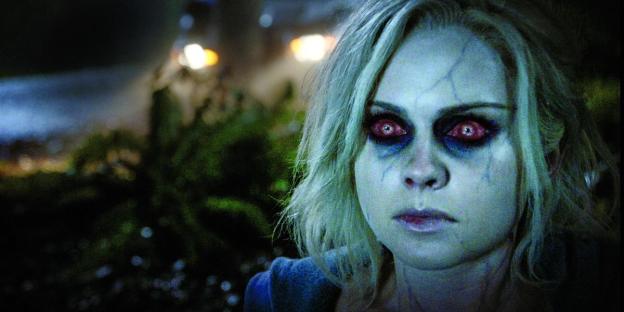 Nope. Doesn’t turn into a brain-eating zombie either.

Her phallic armpit monster, um, thing, sucks the blood out of those she gets close to. So, Rose spends most of the film prancing around, first in the clinic, later throughout Montreal, hugging people as prelude to a kill. Except she doesn’t actually kill them. Instead, they gradually turn into mindless rage monsters seeking to dine on human flesh.

Which is where an interesting debate comes into play with Rabid. Is it a modified vampire movie? A zombie movie? Just a kinky disease outbreak movie that oddly predicted AIDS by several years? How, exactly, do you categorize it?

Regardless, the first half of the film is devoted entirely to Rose’s mysterious awakening whereas the second half gives way to a series of vignettes with side characters either themselves turning into or encountering others who have been infected by Rose, who veers back and forth between knowing exactly what she’s doing and being as much a victim of it as anyone. And because it’s Cronenberg it all goes very dark. I’m talking baby-killing dark.

Once we reach the admirably bleak ending, on-screen text immediately pops up to acknowledging the film’s financial reliance on the Canadian Film Development Corporation, as if flipping the finger at Robert Fulford.

However, after Shivers the world was onto Cronenberg’s act. As a result, Rabid underwent intense scrutiny at the MPAA, although that was also due to prejudice against Chambers’ attempt to crossover into the mainstream. That might explain why certain scenes, such as one in an adult film theater, seem to build to more gore than they end up delivering.

Rabid also went to Cannes and sold to various countries, including to Roger Corman’s New World Pictures in the States, where future heavyweights like Joe Dante (Gremlins), Jon Davison (Airplane!), and Allan Arkus (Rock and Roll High School) were blown away by the mixture of horror and high art. As Arkus, who worked in New World’s trailer department, told David Konow in Reel Terror, “You knew [Cronenberg] was a filmmaker.”

But that was the impression you got back in 1977. Watching Rabid in 2018, it feels a bit hollow, not entirely insubstantial, but not exactly essential viewing either. From start to finish, we learn virtually nothing about any of the major characters other than the clinic’s primary doctor sure loves medicine and the clinic’s business manager sure loves money.

Rabid, of course, is not the kind of movie you watch for the characters or storyline. You watch for the crazy body horror, and there is admittedly an odd “you don’t see that every day” kick out of death-by-armpit-monster, even if the sexual metaphor feels underdeveloped. Moreover, you watch to see a director maturing, and Cronenberg’s increasing confidence with the camera is obvious.

-Not afraid to go to dark places

-The boyfriend trying to find and save Chambers kind of comes and goes, as if he might as well not even be in the movie

-Inconsistencies with how exactly Rose’s infection impacts her victims and how she chooses where exactly to attack people on their body, usually on their neck, but sometimes elsewhere, including directly in one poor guy’s eye.

-Not overly scary or dread-incuding.

Rabid is currently available to stream on Shudder.