I’m a guy. I’m in my 30s. I have a college degree. And I’m currently a member of a fantasy sports league.

Such a cliche, right? According to the Fantasy Sports Trade Association, the average fantasy sports player is exactly someone like me since nearly three-quarters of all players are male, half have a college degree and the average age is 32. The most typical fantasy sport of choice? Football.

Yeah…I’m not a part of a fantasy football league. Or baseball, hockey, NASCAR, or – consider this a preemptive apology to any non-U.S. readers for the word I’m about to use – soccer. Or any real traditional sport, to be honest. No, I enjoy the sport of movie box office tracking!

Don’t laugh. That’s an actual thing. ESPN’s own Matthew Berry is behind the league I play in:

What’s not to love about trying to one-up random strangers online in a guessing game about how many tickets each new movie is going to sell?

Unlike Mark Cuban or Quentin Tarantino, few of us get to buy our own movie theaters which we can force to play whichever movies we want, and the actual job of running a movie theater involves messy real world problems like disgruntled customers, dwindling concessions supplies, steady workforce turnover, and paper thin profit margins. Fantasy Movie League lets us pretend like we’re programming our own movie theater each weekend without any of that hassle. It frees us to brag when our fictional movie theater rakes in big bucks based on what we perceived to be the wisest fiscal bets.

Cool. Cool, cool, cool. Not to contradict myself here, but why would anyone ever want to play a game like that? Moreover, why do we care so much about box office these days? Used to be, a film’s financial performance was the exclusive province of the industry trades. For those whose careers depended on it, tracking the box office reports in Variety was a mandatory and often stressful activity. The general public only ever heard about the extremes, like when long-held records were broken or high profile films flopped. 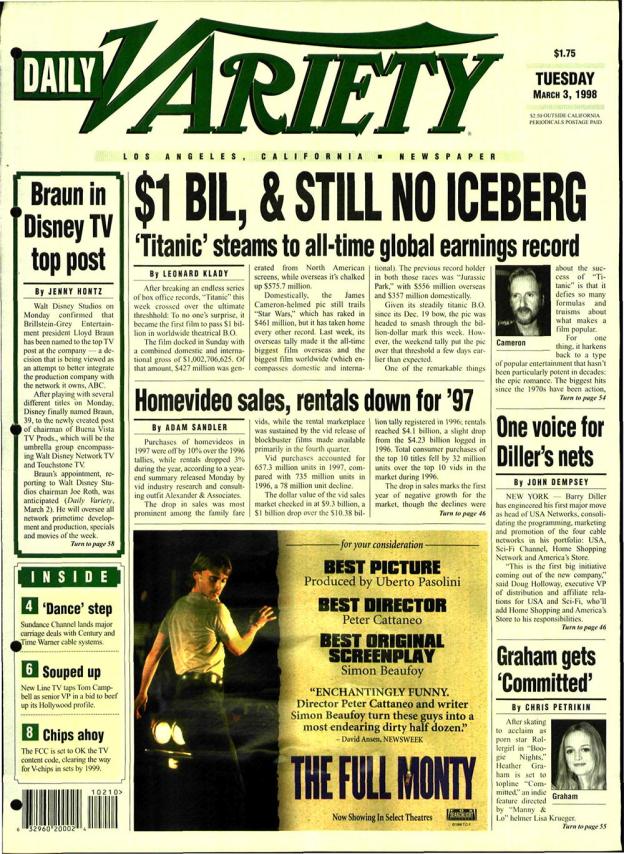 For example, as a teenager I recall being fully aware of Titanic‘s historic box office performance as well as Lost in Space’s embarrassing disappearing act. In that same timespan, however, I had no idea how much money Austin Powers, The Truman Show, or Scream 2 made. At best, I was vaguely aware of where each movie placed in the top 10 on opening weekend thanks to Entertainment Weekly. To me, those films were meant to be seen and enjoyed, not treated as glorified entries on a makeshift stock market. If they were worth seeing, I’d hear about it from friends, not on any box office chart.

What happened? When did this change? When did we become armchair box office analysts, so much so that an ESPN analyst now heavily promotes a fantasy movie league and a box office-focused YouTube show like ScreenJunkies News’ Charting With Dan! regularly pulls in nearly 100,000 views?

Like so much else in modern Hollywood, it all goes back to Jaws.

According to Shaun Raviv’s fantastic new The Ringer article “Moneyballing the Movies: How Box Office Became a Sport,” box office reporting used to be a regional affair involving local stringers calling up movie theater managers on Monday mornings to get the weekend figures. Sometimes the managers were cooperative and the figures they provided accurate, other times the managers dragged their feet, forcing the stringer to fudge the numbers. Either way, Variety began reporting the aggregate weekly results from the top 25 cities in the 1940s. The first reporting of annual grosses didn’t arrive until 1950. This haphazard approach continued into the 70s. 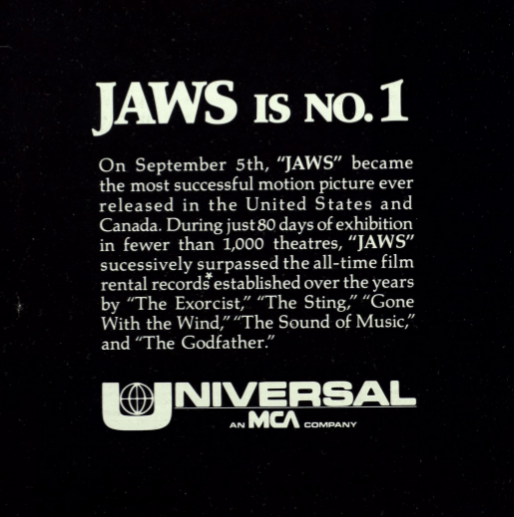 Yes, the “Jaws changed Hollywood forever” thesis is well-worn territory by now. Same goes for the counter-arguments that it’s not Jaws but Jaws in combination with Star Wars which truly changed things or that the closer comparison to our modern blockbuster system is actually the 1989 Batman, not Jaws, as I explained in far greater detail 4 years ago. 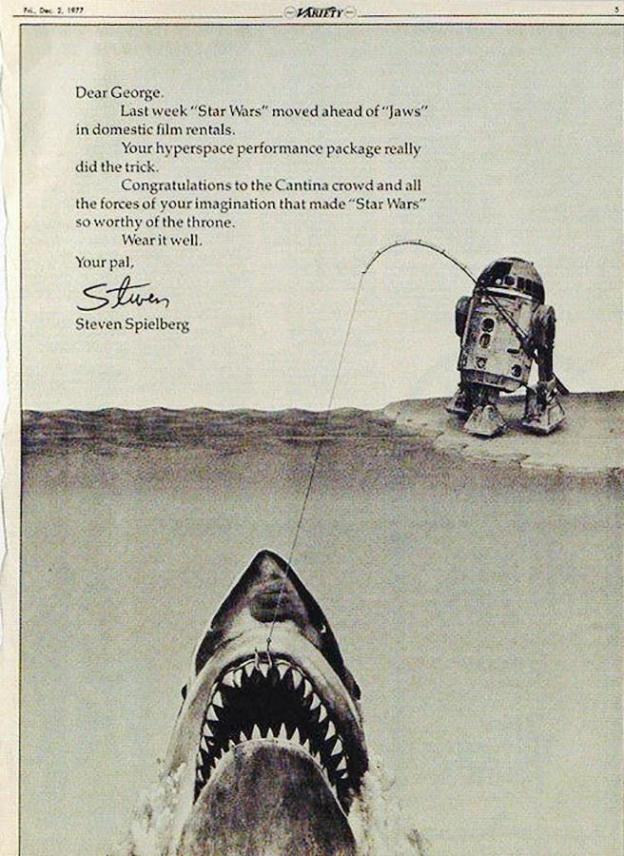 Less appreciated, however, is the impact Jaws had on box office reporting. Nothing quite like what Newsweek dubbed Jawsmania, with people seeing the film multiple times and scouring retailers for related merchandise, had ever happened to the film industry before. As such, it demanded more stringent reporting. In the days after Jaws’ release, for example, “Variety ran 13 stories about its grosses in different U.S. cities,” at least according to Dade Hayes and Jonathan Bing’s book Open Wide: How Hollywood Box Office Became a National Obsession.

It’s still a great white shark-sized jump from that to where we are today, but as Jaws brought more attention to box office and the subsequent blockbusters of the late 70s and throughout the 80s continued the trend generations were slowly conditioned to become more aware of the financial side of the film industry. By the 90s, box office reporting had moved beyond Variety and gone mainstream thanks to Entertainment Weekly. In late 1997, IBM software developer Bruce Nash founded the website The-Numbers.com, which still exists today as the most prominent competitor to IMDB-owned BoxOfficeMojo.com. (The actual box office data itself actually goes through media measurement company comScore, which then releases it to the studios).

Within weeks of The-Numbers’ launch, Titanic happened. Here’s how Nash recalls the experience of being on the frontlines at a moment like that, as quoted in Raviv’s The Ringer piece: “Here comes Titanic and it’s just breaking all of these records and there was so much interest around that. It made me feel that I was doing the right thing with the site.”

Of course, that was also the beginning of the mainstream awareness of the inflation debate – the old “Gone With the Wind actually made more than Titanic when you adjust for inflation.” (Irony: Titanic fans ended up making the same argument after Black Panther surpassed it on the record charts this year.) The world was not only newly aware of the potential for historic box office performance but also the nuance that must sometimes go along with such conversations.

Since then, the nuance has grown to incorporate even more intricate measures like multiplier (how well a film holds up after opening weekend). Plus, the explosion of the international market (along with the relative stagnation of the domestic market) has added a whole slew of new variables to consider, like local holidays and the box office black hole created every 4 years by the World Cup.

It’s risen to the point that box office forecasting and reporting has adopted the more sabermetric-leaning language of post-Moneyball baseball. Don’t tell me about a baseball player’s batting average; instead, give me his BABiP (batting average on balls in play), wOBA (weighted on-base average), and WAR (wins above replacement). Similarly, don’t simply give me a film’s weekend gross but also what it made in Thursday night previews, the Friday-Sunday multiplier, and a market-by-market breakdown of its international performance with historical comparisons to similar releases.

Before we even get there, when you make your opening weekend predictions make sure to factor in things like IMDB page views, Fandango’s Fanticipation score (“calculated via an algorithm of Fandango’s advance ticket sales, website and mobile traffic, and social media engagement”) RottenTomatoes/Metacritic ratings, and YouTube trailer views.

The answer to the question of why we suddenly care so much about box office, then, is perhaps two-fold: 1st) It’s not so sudden; 2nd) We just have so many more data points to play around with now.

Jaws invented the Hollywood blockbuster and created the summer movie season. The 1989 Batman took that even further and showed Hollywood how to truly manufacture an opening weekend with a super-saturated theater total and marketing spend. This signaled a shift toward more of a horse race approach wherein there are clearer winners and losers when all that matters is opening weekend as opposed to the old days when movies stuck around in theaters for at least 6 months if not a full year, such as extreme success stories like E.T. Now, in the internet age box office data is far more accessible with more sophisticated tools of analysis at our disposal.

Moreover, we’ll bet on just about anything these days, from where Kim Jong-Un will travel next to even the life expectancy of sick people in hospitals (that betting trend comes courtesy of Taiwan). And as the fantasy sports concept has exploded (14% of all Americans are a part of a league) opportunists have taken to looking outside of traditional sports for concepts which can be packaged and geared toward the people who don’t know the difference between a quarterback and a power forward but can tell you their favorite e-sports star or last year’s Oscar winners.

Movie box office is thus a natural new home for statistical obsession, regardless of whether you play in Fantasy Movie League. There are already decades worth of data from older films which can be used for historical comparisons. Each new movie is like a team or player for us to root for or against (after all, in success those movies we actually enjoy are more likely to earn a sequel). In an opening weekend-obsessed age, there are clearer winners and losers, but due to the historical data, there are also ongoing debates over how to categorize things like the biggest films of all time, such as Black Panther technically making more than Titanic but selling significantly fewer tickets. Any movie-loving, sports-averse quant nerd has more than enough to chew on with all of that.

Plus, as with sports box office obsession also gives all of us something to talk about, some common ground to communicate from, and when we happen to be right with our predictions it delivers a rewarding dose of dopamine to our brains. There’s also a certain sense of validation to be gained when a movie you championed does well. After all, not all box office observers are simply quant nerds. Some are also the kinds of fans looking to box office data for empirical support in their arguments about what Hollywood should be doing more of, such as more female-led blockbusters.

My Fantasy Movie League team, by the way, the fightin’ WeMinoredInFilm (I clearly stretched myself with the name) isn’t doing so well. I actually keep forgetting to make my weekly picks. Back when I was a more active member, I regularly ranked in the top 51%, but just barely. Turns out, picking the right combination of blockbusters and indie movies to ultimately offer something for everyone is harder than I expected.

What about you? What kind of box office observer are you? Unabashed quant nerd? Casual at best? Need-evidence-to-support-argument-about-need-for-more diversity minded? Or simply someone who thinks I should have thought up a better phrase than “box office observer”? Let me know in the comments section.