Michael Moore has a new documentary.

Wait! Don’t swipe or click away yet. I know Moore is a divisive figure these days. His high profile, both in the body of his documentaries and in the promotion of them, has made him an easy whipping boy on the right and a figure of some regret on the left. The splashy, self-aggrandizing social issue documentary style he popularized with Roger & Me, Bowling for Columbine and Fahrenheit 9/11 has now been co-opted by his even more conspiracy theory-minded filmmaking counterparts on the right, most obviously Dinesh D’Souza.

Moreover, with the increasing polarization of society the days of Fahrenheit 9/11 playing to audiences of all political persuasions across the globe and grossing a record $224m worldwide are over. D’Souza’s documentaries continue playing to acolytes on the right, Moore’s to acolytes on the left, and nothing of any real import gets changed. Even when Moore tries to reach across the aisle, as he almost literally did in his one man showed-turned-documentary Michael Moore in TrumpLand, the results still struggle to penetrate through our filter bubbles. Whether Moore’s films are of a higher quality, both in terms of filmmaking and journalism, than someone like D’Souza’s doesn’t seem to even matter. One guy is the liberal, the other is the conservative. Form your tribes around that.

As such, unless Moore’s new work, the anti-Trump screed Fahrenheit 11/9, manages to expose certain public figures to Sacha Baron Cohen-levels of humiliation or somehow scoops the Mueller investigation, the world will most likely keep on going as it has been. This is the documentary which is supposed to take down Trump, Moore has boastfully promised, but the messenger in this case is already so divisive. Plus, his signature work, Fahrenheit 9/11, which depicted the Bush administration as being in bed with the military industrial complex, already failed in its effort to derail Bush’s re-election campaign it’s hard to get too worked up here.

So, instead I pulled out my copy of The Hollywood Economist 2.0, investigative reporter and Harvard/MIT/UCLA professor Jay Epstein’s formative text on the behind the scenes workings of the film industry machine. I remember there was something peculiar about how Moore’s Fahrenheit 9/11 ended up being distributed and that Epstein’s book has a chapter about it: “Paranoia for Fun and Profit: The Saga of Fahrenheit 9/11.”

The “something peculiar,” it turns out, is this: Disney distributed Fahrenheit 9/11. Just not officially. It’s all Harvey Weinstein’s fault, really, because of course it is.

Moore originally conceived of Fahrenheit 9/11 with the idea that it would be financed by Mel Gibson’s Icon Productions. Whether Gibson backed out of the deal or if no such deal ever even existed varies depending on who you ask, but the result is the same: Moore had no financier.

Weinstein and Miramax Pictures thus became Moore’s savior when it agreed to take on the project, gifting him a $6 million budget. Except Harvey didn’t have total greenlight power on matters like this. Disney, Miramax’s parent company since 1993, held veto power and could thus stop Miramax from distributing any movies it didn’t first approve. Michael Eisner exercised that power in May 2003. Miramax may have had the rights to Fahrenheit 9/11, but it couldn’t do anything with it, at least not in a way which could be traced back to Disney.

This wasn’t the first time this had happened. Miramax’s efforts to distribute the films Kids and Dogma had been similarly vetoed. In those cases, Disney allowed Bob and Harvey Weinstein to buy the films back and simply set up short-lived companies to distribute them.

In this case, by the time the Disney veto arrived the damage had already been done. $6 million was all Moore needed to buy all the archival TV footage he ended up using, and with any of the new interviews he conducted he didn’t pay any of the on-air talent other than himself. Disney informed Weinstein the $6 million was to be considered bridge financing and that Miramax was to dispose itself of any interest in the film once the work was completed.

Weinstein saw a rough cut on April 13, 2004, and unsuccessfully asked Eisner to change his mind. Eisner didn’t actually watch the film himself at that point, but received a report about its content and didn’t see a need to change his mind when he read about Moore using sources like Al Jazeera and Al-Arabiya televisions. As such, Weinstein agreed to sell Fahrenheit 9/11 after its Cannes Film Festival premiere. 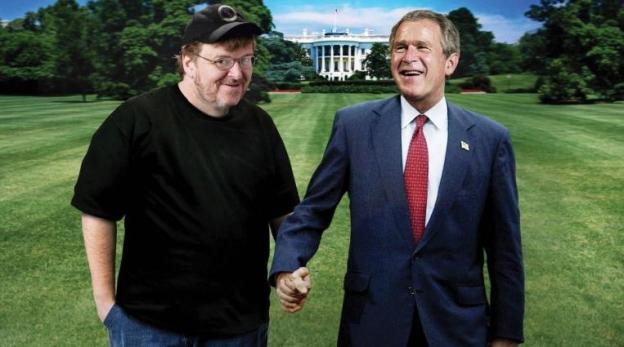 Moore wasn’t so willing to play the good soldier. After all, his movie was explicitly designed to anger the electorate and lead to Bush being voted out of office. That couldn’t happen if he didn’t have a distributor. So, he came up with a new strategy: cry censorship.

Two weeks before its Cannes debut, Moore’s strategy took root in a New York Times front-page headline: “Disney is Blocking Distribution of a Film That Criticizes Bush.” The actual article included a rather damning charge, alleging Eisner “expressed particular concern that [distributing Fahrenheit 9/11] would endanger tax breaks Disney receives for its theme park, hotels, and other ventures in Florida, where Mr. Bush’s brother, Jeb, is governor.”

Who was the source of that little insight? Moore’s agent, Ari Emanuel.

It worked like gangbusters. Fahrenheit 9/11 became the cause celebre at Cannes, where it received a 20-minute standing ovation after its premiere and was awarded the coveted Palme d’Or award.

Of course, Disney, through Miramax, still owned the film, and after Moore’s successful manipulation of the media to pit himself as the David to Disney’s Goliath the wave of free publicity set Fahrenheit 9/11 up to be a huge hit. Disney wanted in on that, but it also didn’t want to take the PR hit from backtracking on its decision.

Eisner’s solution: distribute the movie without actually distributing it. In other word, get someone else to distribute it but on sweetheart deals which would keep most of the money with Disney.

Practically, this meant selling the film back to the Weinsteins, having them transfer the rights to Disney corporate front, and then selling the distribution rights through there. Thanks to the film’s buzz, the theatrical and home video distributors (Lions Gate, IFC, Columbia) agreed to take lower cuts, just 12%, than usual. As a result, when Fahrenheit 9/11 grossed $119m domestic, $224m worldwide and sold 3 million DVDs Disney’s neeted $78m after the distributors and theaters took their piece of the pie.

From that $78m, $21m went to Moore, who had scored an insane 27% profit participation. Disney charged itself a $11m acquisition fee and split the remaining $46m between the Disney Foundation and Miramax.

While Disney salvaged a nice profit out of the situation, the whole ordeal was the last straw with the already-strained relationship with the Weinsteins. A year later, Eisner declined to renew their contract.

An addendum: In 2011, Moore sued the Weinstein’s for allegedly using Hollywood accounting tricks to cheat him out of Fahrenheit 9/11 profits. They settled out of court.