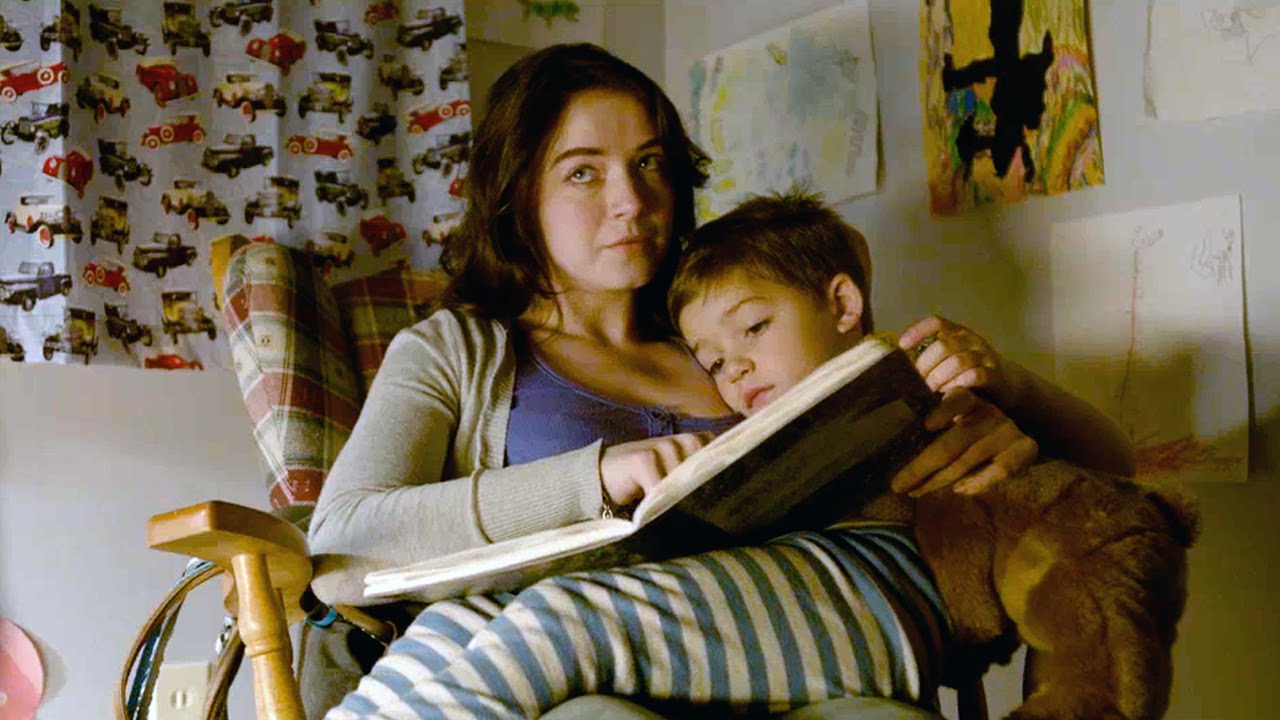 File this under horror movie premises that fall apart if just one of the parents in the story bothered to check Facebook.

It’s date night. Correction: anniversary night for an overworked couple (played by Susan Pourfar and Chris Beetem) with three kids. When their normal 17-year-old babysitter has to cancel at the last minute they settle for letting the babysitter’s best friend, Anna, sub in even though they’ve never met here before.

Small problem: the girl they pick up isn’t who she says she is. We know that because the very first scene of the movie shows us the real Anna being abducted by a mysterious couple, and when the father goes to pick “Anna” up at her mom’s house he doesn’t think it weird that she’s sitting outside instead of waiting for him inside the house. Furthermore, once in the car and making idle small talk with “Anna” he confirms he’s not on Facebook because it has “too much sharing” and thus hasn’t even looked at her Facebook page to verify her identity.

If you can accept the premise that two parents in 2015, the year the film debuted at Tribeca, wouldn’t at least do a little social media sleuthing about a babysitter they’ve never met before, no matter how last minute the scenario – and for some that might be a big if – then Emelie has a perfectly simple, perfectly compelling premise: there’s a stranger in a house with three trusting kids. Who is she (Sarah Bolger)? And what on Earth could she be up to?

Director Michael Thelin, working from a script by Richard Raymond Harry Herbeck, takes the reins from there and delivers a work of exquisite tension, buoyed considerably by Bolger’s outstanding central performance. She plays “Anna” as just off-kilter enough to give us pause. At times, she almost seems like a fairly good babysitter. She gets the stuck-in-his-video-games 11-year-old to come out and play. She gently speaks to the younger kids, the youngest of whom is likely no older than 4, and keeps them from fighting.

However, then in a disarmingly off-kilter voice, she’ll say something like, “Hey, guys. What if I told you that you didn’t have to be a boy or a girl, or a human, or really anything? You could be whatever you wanted and all you had to do was pretend. Because pretending is this superpower we all have. When we pretend, we can be anyone we want to be. And if you get really good at it, people won’t even know you’re pretending anymore.” 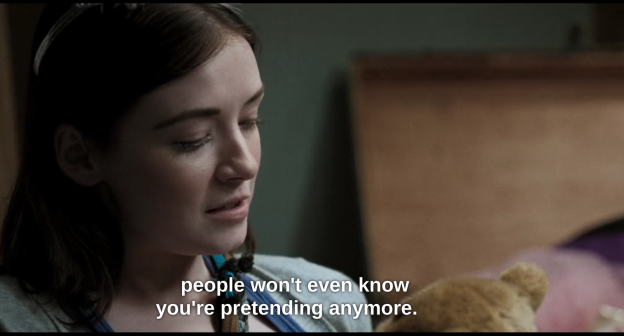 That’s normal enough for the kids not to notice. 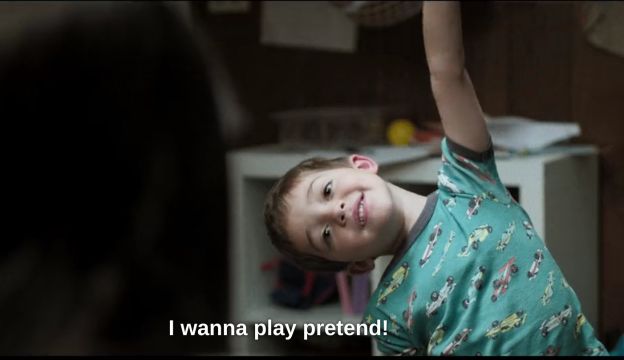 But, our flashing red “this woman is crazy!” lights are firing nonstop. So, each time we cut back to the parents’ anniversary dinner we’re rooting for that damn desert to arrive because they need to get home as fast as possible, even if they don’t realize it yet.

“Anna”’s off-putting words gradually evolve into bizarre behaviors, but, disappointingly, the inherent tension of “Is she going to hurt these kids?” ultimately gives way to lots of poorly shot darkened-room action scenes, coming off like a compromised way to threaten child characters without actually unduly stressing out child actors. Some of this, such as one scene in which the 11-year-old hears “Anna” fighting someone in another room but never actually sees any of it, is effectively chilling. Most of it, though, is just a let-down.

Still, as a twisted little thriller, Emelie gets in and gets out in under 80 minutes, never overstaying its welcome, making it just about the textbook definition of a perfect Netflix streaming option. The actors playing the kids are shockingly authentic (from my babysitting experience, nothing they say or do rings false to me), and Borger’s unhinged central performance will have you looking her up on IMDB to see what else she’s done since this (just a couple of movies, but big TV roles on Into the Badlands, Agent Carter and Counterpart).