Amazon has literally thousands of movies available for free to Prime users. Survey after survey indicates most people don’t watch them or even know they’re there. However, to B-Movie fans Amazon Prime has become far more than just a curious add-on to year-round free shipping. As CNet recently discovered, Amazon doesn’t like to advertise this and wouldn’t comment when asked, but its Prime Video content is overloaded with an awful lot of schlock as well as far more classic horror offerings than competitors like Netflix and Hulu. Perhaps its part of a strategy to curate for fans of forgotten cinema. Perhaps it’s simply an indication of what they could buy on the cheap and then use to turn around and brag about having more movies than Netflix. Either way, midnight cinema is never far away on Amazon Prime.

Over the past couple of months, these are but some of the horror titles I’ve encountered on Prime: 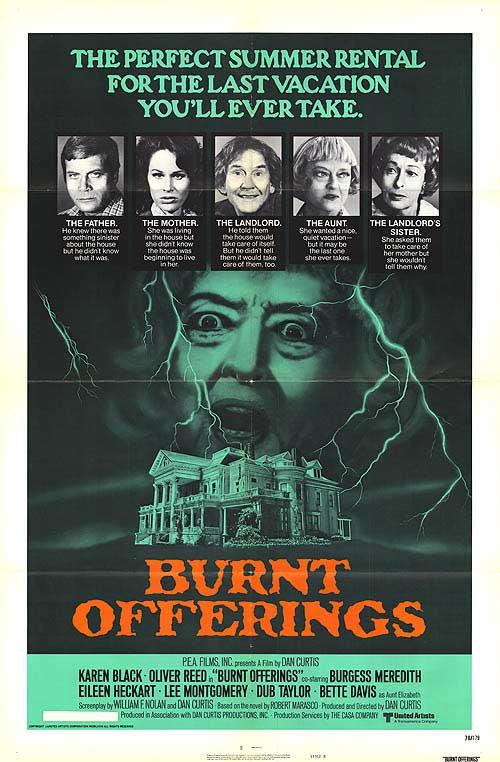 Released four years before Kubrick’s The Shining, Burnt Offerings does ring several familiar bells. A family, in this case Oliver Reed and Karen Black with a pre-teen son and an aging aunt played by Bette Davis, receive a too-good-to-be-true offer to rent a giant, secluded gothic mansion for a season. The offer comes from a rather eccentric landlord (Burgess Meredith, who did more horror films than Rocky fans probably realize) and his sister. The only stipulation: anyone staying in the house must also agree to take care of Meredith’s elderly mother, who mostly stays in her room. As the poster hilariously spells out under Meredith’s picture, “He told them the house would take care of itself. But he didn’t tell them it would take care of them, too.”

No beer and no TV make Homer go something, something.

Except here the corruption isn’t isolated to just the father – this house messes with everyone and in very different ways. Reed goes the way of Jack Torrance, more obviously, but Bette Davis starts to lose her mind and energy and Karen Black becomes increasingly preoccupied with the unseen woman upstairs. It’s mostly up to the son to beg for retreat.

Honestly, the whole thing was worth it for me just to see Reed instantly switch from innocently swimming with his 12-year-old son to violently trying to drown him while Davis screeches for him to stop. It’s one of the many moments where the family’s All-American normalcy is punctured by the house’s corruptive influences and the creeping sense of dread overwhelms everything they do. 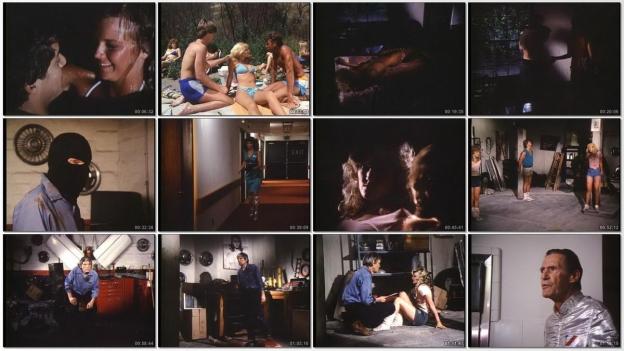 A sexually promiscuous, late 1950s girl named Mary Lou (Lisa Schrage) is burned alive at her high school prom when her square boyfriend catches her cheating and loses his shit. It’s a real “Eat your heart out, Carrie!” kind of opening with a death so gruesome even her inadvertent killer looks away.

30 years later at that same high school, the boyfriend is now the principle (and played by Michael Ironside!) and his teenage son is dating a sweet, shy girl named Vicki (Wendy Lyon) who has a rather domineering mother.

Wouldn’t you know it, Mary Lou’s ghost comes back to possess Vicki and people start dying.

Fun is had by all.

Well, not all. Most everyone dies, often for no good reason. But, Mary Lou is having the time of her afterlife. This leads to a series of inspired jokes about Mary Lou turning Vicki into the school bad girl but not updating her pop culture references or behaviors for the 80s instead of the 50s.

The Shock Waves podcast crew has been banging the bloody drum for this sequel for quite some time now. I don’t know that it’s really the unheralded classic they’ve argued it to be, but as 80s slasher villains go Lisa Schrage and Wendy Lyon’s combined performance as Mary Lou does deserve more recognition.

This one’s tricky to talk about. If you were of a certain age in the early 1980s, you likely have beloved memories of Saturday the 14th, a kid-friendly, gateway horror movie just looking to take the piss out of haunted house and Universal movie monster tropes. It was on in the background of a many a sleepover, to be sure. That’s why Scream Factory’s recent announcement of a forthcoming, extra features-loaded Blu-Ray release strikes both excitement and fear in certain fan’s minds.

Oh, Saturday the 14th? I haven’t seen that in ages!

Oh, Saturday the 14th? Shit. Does it really hold up?

Um, no. At least not totally. I can’t speak to the nostalgia connected to the film as this is my first time seeing it, but it’s certainly lost a fair deal of its immediacy, similar in that way to 1979’s Dracula parody Love at First Bite.

Saturday the 14th does still maintain a mild appeal, though.

Don’t let the title fool you – this has nothing to do with Friday the 13th or slashers. Instead, it’s a haunted house movie where instead of ghosts a family is haunted by The Creature from the Black Lagoon, Dracula, and whatever else the studio’s props department threw together. The family caught in the middle is headed by a purposefully lethargic Richard Benjamin (the joke is nothing strange in the house seems to alarm him at all) and increasingly unhinged Paula Prentiss (Benjamin’s real-life wife, I might add).

Jeffrey Tambor lingers as the potentially villainous Dracula stand-in Waldemar, whose own wife (Nancy Lee Andrews) is highly suspicious of his preoccupation with Prentiss. I got a kick out of their bickering as well as the finale where the shit has really hit the fan and yet Benjamin continues on with his Mike Brady act of assuming everything’s fine.