Effective with its spooks and nicely tied together by its framing device, horror anthology Ghost Stories still falls short of greatness. It leaves you with the impression that the play it’s based on was probably something truly special.

Eight years ago, British TV was filled with stories in which reporters were dispatched to the West End to get to the bottom of the Ghost Stories phenomenon, which was being hailed as “the most chilling play ever put on stage.” It came from the minds of Jeremy Dyson (The League of Gentlemen) and Andy Nyman (Mind Games), who met in summer camp as teenagers and bonded over their shared love of horror.

Just one small problem, though: Dyson and Nyman wouldn’t let reporters film any part of the play. They wouldn’t even talk about the plot. As Nyman told The Culture Show, “Everything is so spoiled for you now. Trailers ruin everything. We just think it’s so exciting to go and see something – especially something that promises ‘we’ll scare you’ – it’s so exciting to not even know where it’s set or what it’s about.”

The selling point for the play, then, looked awfully familiar to anyone who remembers this relatively recent trick from the horror movie marketing playbook:

Just lots of shots of people jumping in their seats while something loud and scary happens on stage.

Ghost Stories is a movie now, but I can’t just show you a picture of my face from when I was watching the film on VOD last night and call it good. Nyman might be right about spoiler culture, but I have to at least tell you a little bit about the plot, especially since that’s one of the things I like the most about the film. 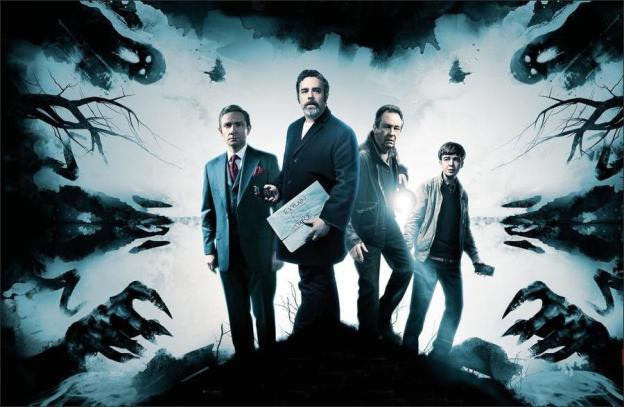 Nyman plays Professor Andy Goodman, a parapsychologist with a TV show devoted to exposing fraudulent psychics and finding the truth behind tales of hauntings. He considers it his calling to do this because of the way superstitions ruined his family as a child, and he’s modeled his career off of a famous 1970s paranormal investigator named Charles Cameron, who debunked many of life’s mysteries only to then become one himself when he suddenly disappeared. So, when someone claiming to be Cameron reaches out to Goodman requesting a get-together he obviously has to go.

What he finds is a bitter old man in failing health and zero tolerance for hero worship. Rather than accept Goodman’s words of praise, Cameron refers to himself as a failure and accuses Goodman of walking the same path. The supernatural is real, he proclaims, and to prove it he gives Goodman three of his old cold cases he could never disprove.

His integrity and entire life’s work drawn into question, Goodman sets about investigating these cases right away. Thus, Ghost Stories’ turns into an anthology movie about a skeptic investigating three different cases of unexplained hauntings.

It’s a remarkably tidy framing device, certainly more elaborate than I’ve seen in other horror anthologies. As many have pointed out, the inspiration appears to be the various “Amicus portmanteau movies from the 1960s,” but that applies to more than just the story structure. In feel, Ghost Stories is quite old-fashioned. Nyman and Dyson, who co-directed, are well aware of modern cinematic horror tropes and use them well, but only to the point of yelling “Boo!” before moving on to the next story.

This is where the film’s based-on-a-play status bleeds through. Each one of the three individual ghost stories ends with a truly legit scare, not a death or narrow escape. Once the hero of each segment – played by Paul Whitehouse, The End of the F****** World’s Alex Lawther, Martin Freeman respectively – is in the direst of straits with no way out the story just stops, with Goodman simply moving on to the next case. Often times there’s not even a reference to how the person survived or what exactly happened next for them.

This means that just when things are getting good we have to switch focus. When done on stage, it’s easy to see how this series of horror climaxes would titillate, especially considering how unique that would be to see in a play format, but on film it’s plenty scary, but also quite frustrating.

Each one of the stories is also quite short, leaving you doing the ole “Wow, they’ve still got like 30 minutes left. How is this going to end?” thought experiment. That’s because there is indeed a rug-pulling final story which is predictable in its initial twist, but captivatingly unnerving beyond that point. In the final minutes, Dyson and Nyman’s script commits the sin of trying far too hard to tie everything together and offer a grand explanation, but it’s also some of the scariest work in the whole film, with the work of the sound and lighting departments coming together to great effect.

Similar to the play, Ghost Stories has been a word-of-mouth hit for months now. After making the film festival rounds and enjoying an actual theatrical run in the UK earlier this year, the film has generated enough good will to land on many a horrorhound must-watch list. Now that it’s finally available on VOD I’d say it falls sadly short of being a true must-watch. It has the feel of a great play that’s been converted into a simply good movie, certainly a worthwhile homage to the Amicus films of old. There are worse things to be.

Extra points for the sight of an impossibly chipper Martin Freeman in a three-piece suit.

Ghost Stories is currently available to rent on VOD.