NOTE: I’ve never read a single Venom comic book before. So, I won’t pretend to judge this movie according to the comics.

The last time producers Avi Arad and Matt Tolmach got their hands on a superhero movie, The Amazing Spider-Man 2, they engineered something which was almost defiantly behind the times. Because of that, they’re not allowed anywhere near Spider-Man now. But, Sony couldn’t also pry Venom away from them, and, not surprisingly, they’ve produced yet another throwback superhero movie. Except this time, they cast Tom Hardy in the lead and his inherent strangeness turns Venom into something surprisingly watchable.

Think of everything you find to be modern about today’s best superhero movies. Cutting edge special effects. Perfect mixture of humor and drama. The sense that everything is taking place in if not the real world then at least something close to it. A larger artistic vision ensuring all the pieces between the movies fit. Villains who make just as much sense as the heroes. A willingness to bend what we thought was possible in the genre by going into Oscar territory (Logan) or super satirical (Deadpool).

Now forget all of that and imagine someone just uncovered a lost superhero movie from 1998 or maybe 2003. The CGI looks cheap. Most of the action scenes are set to rock music. The plot holes are big enough you could drive a Plymouth truck through them. Character motivations switch on a dime. It all seems blissfully unaware that superhero movies can be anything other than disposable or that having actual edges which haven’t been sanded off by overzealous producers is not a bad thing 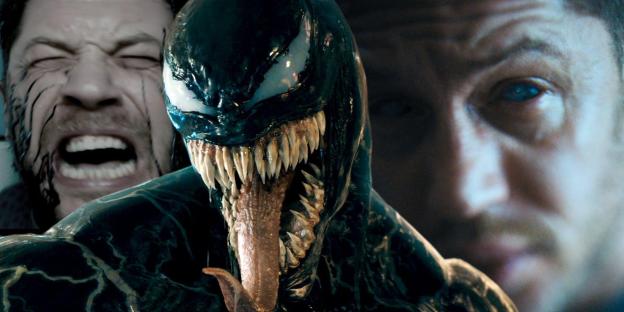 Yet, I kind of liked it.

Correction: I liked it once Hardy started doing his best Upgrade impression, debating with the voice in his head which has taken partial control of his body. It’s a long walk getting to that point, though.

The set-up is this: a spaceship carrying extra-terrestrial specimens uncovered from an asteroid crash lands on Earth. Since Chinese company Tencent Pictures covered a third of the film’s budget, the ship crashes in Malaysia, and one of the specimens inside infects a progression of Asian people. The tradeoff is they each earn super powers like turning their arms into knives or shooting blades out of their back. The downside is their insides cook up until the thing inside of them finds another host. The other specimens, however, are recovered and safely secured by the Life Foundation and its CEO Carlton Drake (Riz Ahmed, doing a combo Jobs/Zuckerberg impression as a tech kid who got crazy rich and now wants to conquer space travel).

We know all of that by the time San Francisco-based intrepid reporter – and I use that expression loosely – Eddie Brock lands an interview with Drake. He has something called The Brock Report. It airs on MNBN. There’s a wholly unconvincing montage of his man-on-the-street reporting and everything. It’s like no one making the movie has ever seen Vice or understands how the news works today.

Whatever. Ultimately not important.

Drake uses intel stolen from his fiance who happens to be a lawyer (an underused Michelle Williams) to say something he shouldn’t to Drake and is subsequently ruined. No more Brock Report. No more fiance. Just a sad little apartment in a bad area of town and six months without any work and no real prospects. Plus, there’s an almost Mask-like roster of paper villains, like a noisy next door neighbor, he’s too afraid to confront but will surely stand up to later once he’s Venom.

That process starts when a Drake employee unfortunately named Dr. Skirth (an underused Jenny Slate…sensing a pattern here?), offers to be an anonymous whistleblower for Eddie, and smuggles him into the Life Foundation to take pictures of the experiments. This mostly means Jenny Slate gets to be Mrs. Exposition before exiting the story. She’s the one, for example, who tells us the specimens, which all look like puddles of goo, are called “symbiotes.” Drake, we learn through her, is rounding up people and…

Ah, who cares. Again, it’s not actually important what Drake is doing or why. Jeff Pinkner, Scott Rosenberg, and Kelly Marcel’s script doesn’t really seem to care about any of that.

The whole thing is just an excuse to get us to the inevitable moment when the symbiote which calls itself Venom merges with Eddie (it happens when he opens a Life Foundation door he shouldn’t have) and starts shouting things in his mind like “HUNGRY!” Venom, btw, is also voiced by Hardy, but it’s been so heavily processed and deepened you’d never know it.

Eddie, of course, thinks he’s going crazy or is dying from some disease. It’s only once the Life Foundation security people come to take Eddie for testing that Venom fully reveals itself. The line “Outstanding! Now let’s bite off all their heads and pile their bodies in a corner” isn’t too far behind, and it got a huge laugh from my audience.

The scenario which follows from that point forward is remarkably similar to Leigh Whannell’s Upgrade, a truly excellent slice of B-movie sci-fi.. A disembodied voice debates with the protagonist inside his head and occasionally controls his body, giving us repeated scenes of a leading man kicking ass while reacting like he has no idea how he’s actually doing any of it.

Upgrade does it better, but Venom takes a surprisingly decent stab at it, helped largely by Hardy’s consistently weird performance. His version of a man the film itself describes as a “loser” comes off like a raw, jumble of nerves who seems forever challenged to deliver even a single line of dialogue without seeming quirky. You haven’t lived, for example, until you’ve heard Hardy describe Venom being up his butt.

But, forget all of that. Whenever Hardy is arguing with Venom, who is often mocking him, the movie is intentionally funny and astonishingly enjoyable. Eddie’s ongoing struggle to stop Venom from eating small animals, for example, always made me smile. Elsewhere, the humor is often unintentional (I don’t think Eddie saying “My legs are broken, but now they’re not. What?” was supposed to get as many laughs as it did last night).

There’s a vague, Mask-like idea that Hardy cures Venom of his more homicidal tendencies while Venom, in turn, emboldens him to be more assertive. It doesn’t totally work, but by the end when Eddie is walking down a busy sidewalk and explaining the basic “with great power must also come…” principle to Venom (“But when do we bite their heads off?”) the film has successfully turned into a showcase for an endearing comedy duo.