This October, we’re challenging ourselves to watch at least one horror movie a day. Today’s pick is a 1985 movie which looked at Romero’s serious approach to metaphorical zombie stories and said, “Screw it. Let’s have some fun!”

The 1985 splatter-spoof Return of the Living Dead beat Shaun of the Dead to the zombie horror-comedy punch by 20 years and did the whole zombies-that-run thing well before 28 Days Later. Yet, it’s hardly some forgotten gem which doesn’t get the respect it deserves for being the first to do certain things. Quite the contrary. Return of the Living Dead is a bonafide cult classic which spawned four sequels. When, at the start of the 2010s, Hollywood decided to start making expansive documentaries devoted entirely to long-running horror franchises, Return of the Living Dead was the third one up after Nightmare on Elm Street and Friday the 13th.

Yet, until last night I’d never actually seen Return of the Living Dead.

My gut reaction to what I saw: It’s hard not to love any movie which comes with the tagline “They’re back from the grave and ready to party.” 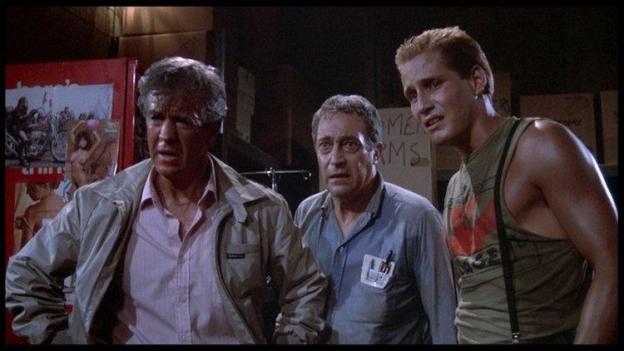 The set-up: When Frank (James Karen), the foreman of a medical supply warehouse, gives new trainee Freddy (Friday the 13th Part VI’s Thom Matthews) a tour of the facility, they accidentally tap open a military canister containing a mysterious corpse and deadly toxin which knocks them unconscious. They awake to discover the various cadavers and body parts in the warehouse are now alive. With the assistance of the frugal warehouse owner Burt (Clu Gulager), they try to neutralize the threat by following everything they saw in Night of the Living Dead.

None of it works, of course, because Night of the Living Dead is just a movie. As Frank explains:

Thus, Return of the Living Dead takes place in an alternate continuity where Night of the Living Dead exists but is just a movie corrupted by a military cover-up effort to distract the public from a genuine zombie outbreak which happened at Pittsburg, Pennyslvania VA in 1969.

So, when Frank, Freddy and Burt – who, it should be noted, have an enjoyable chemistry together – bring an axe down on a zombie’s brain only for it to then continue writhing on the ground in agony, clearly not stopped by the old Romero trick for defeating zombies, they realize they have no idea what to do. Their solution – to simply incinerate the newly animated corpses and body parts – makes things so much worse. The burning bodies release a chemical into the sky which comes back down as an acid rain and brings forth an army of zombies from the nearby cemetery.

Soon enough, Frank, Feddy, Burt, a mortician named Ernie (Don Calfa), and a handful of Freddy’s punk rock/new wave-ish friends shelter in place and try to understand what the heck is happening. Spoiler: most of them don’t make it.

Let’s back up to add some historical context here.

In the summer of 1985, audiences were presented with two very different versions of a zombie movie. One was slow, depressing, and looking to say something profound about society’s tendency to collapse. The other was fast, fun, and looking to say nothing about the world at all. It just wanted to entertain you. Not surprisingly, audiences overwhelmingly preferred the latter option.

The films: George Romero’s Day of the Dead and Dan O’Bannon’s Return of the Living Dead. The former flopped; the latter tripled Day’s box office. 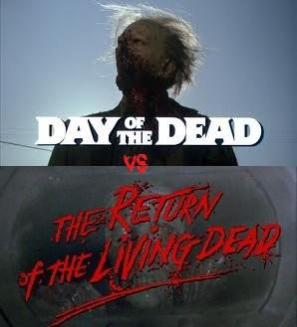 Never before had Romero, the godfather of the zombie movie, been challenged so directly like that. He made social message movies – be it about race, consumerism, or the downfall of society – that just happened to feature the dead hunting the living. And where George leads, the rest of the zombie movies follow.

Not Return of the Living Dead, though. It breaks all of Romero’s rules. There’s no larger meaning to any of it. The zombies move fast, occasionally talk, and are only interested in eating brains, not human flesh, a first for the zombie subgenre. And there’s gratuitous nudity. Lots of it, albeit all from the same girl over and over again.

To think, it all started with a screenplay written by one of Romero’s old buddies. 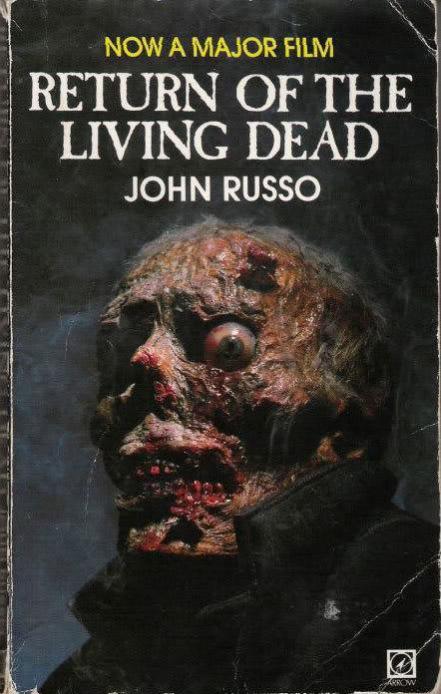 After the success of Night of the Living Dead in 1968, Romero and his co-screenwriter John Russo parted ways. George was allowed to make any future zombie movies he wanted, but John maintained the rights to any title featuring the phrase “Living Dead.” The same year George released Dawn of the Dead John published a similarly serious-minded novel called Return of the Living Dead. By 1984, George was prepping Day of the Dead, and John had adapted his book into a script and lined up a producer (John Fox) and director (Tobe Hooper) to bring it to the screen.

Then they hired Alien screenwriter Dan O’Bannon to polish the script and everything changed.

As O’Bannon explained in Designing the Dead, “The fundamental decision was this: George Romero was making a series of serious movies about the living dead. I don’t want to walk on his toes any deeper than I have to. I’m going to do it as a comedy.”

So, he did a page one rewrite. When Hooper backed out to make Lifeforce instead, Fox asked O’Bannon if he’d direct, unaware that directing was always O’Bannon’s dream. Screenwriting was simply the thing that took off first. Return of the Living Dead was his debut behind the camera, and he recruited various practical effects and makeup wizards to deliver the gore while he delivered the jokes.

And O’Bannon’s approach to the material was to embrace not just genre deconstruction but also utter shamelessness. Have Linnea Quigley strip naked atop a crypt for no real reason and then stay mostly naked for the rest of the movie. Pump buckets of blood into the death scenes. Hire a local amputee to play a legless zombie who uses just his knees to chase after Ernie. When James Karen and Thom Matthews go so over-the-top that even mid-90s Jim Carrey would probably tell them to dial it back, don’t say a word. Instead, just let them do their thing because it all adds to the party vibe of the movie.

That might be the best way to describe Return of the Living Dead: it feels like a party movie, something tailor-made for the VHS viewing parties of the time as well as today’s various anniversary and repertory theater screenings. You cheer when one of the zombies gets on an EMS dispatch and mumbles “Send more paramedics.” You laugh at Burt’s odd lack of serious concern for the real shit they’re all in. Generally, you revel in the reminder that zombie movies can just be pure fun.

That’s not to say Return of the Living Dead is all laughs. Some of the scares are played completely straight, and a mid-movie revelation of why the zombies eat brains (“to stop the pain”) is a sobering bit of drama. They are in agony and the only cure is human brains.

It’s a gracenote like that which elevates Return of the Living Dead into a zombie comedy that is a cut above just about e everything else.