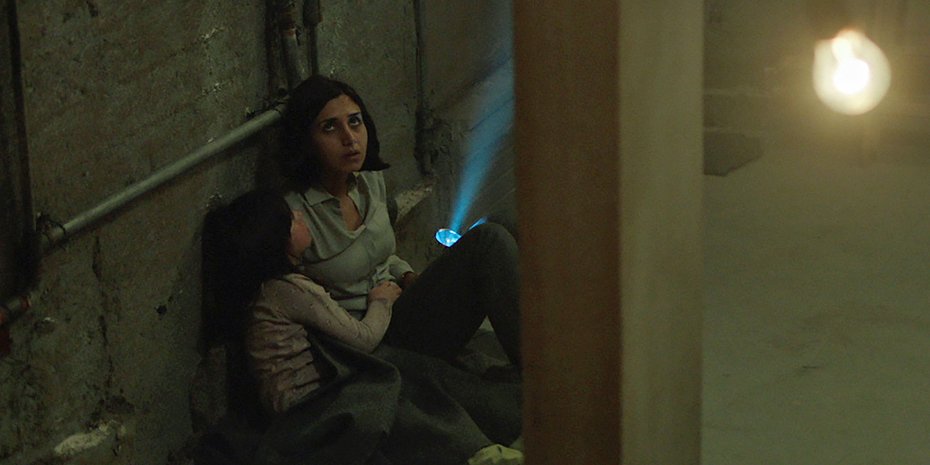 This October, we’re challenging ourselves to watch at least one horror movie a day. Today we’re tackling three different titles tied together by a single theme: foreign horror movies about motherhood. We already did The Babadook. Now, it’s time for…

And you’re a woman.

That’s arguably a scary enough premise for any film, but Under the Shadow does the classic horror allegory thing in a rather non-traditional setting.

The plot is classic horror: A kid (Avin Manshadi) says she sees something strange in the apartment. Her mom (Narges Rashidi) doesn’t believe her. She really should have because, yeah, there’s totally something weird happening in the entire apartment complex. We’re told it’s a jinn. The mom has scary dreams about losing her daughter. Not good, obviously.

But the power of Under the Shadow is everything that happens in the background. The supernatural is used here to speak to what it’s like to be a woman living under a totalitarian regime. Your doctor husband is forced into military service or else he’ll lose his license, leaving you vulnerable and alone with your daughter. You’re denied social advancement because of your gender and that one time you participated in some rallies. To top it off, a literal bomb hangs over your head, lodged into the roof of your apartment complex, forever threatening to detonate, an apt metaphor for living through the Iran-Iraq war.

The daughter seeks to deal with this trauma by turning to fantasy, or so the mother thinks. Soon enough, she realizes the strange invisible woman her daughter talks to is very real and just might be trying to replace her as mother.

Much of the steady progression of scares is familiar to horror fans, but few films have told this story in this particular culture. Pretty much just this and A Girl Walks Home Alone at Night. That gives us a wonderfully unique movie. When the lead character, for example, does the logical thing and takes her daughter and runs into the night but forgets to put on her chador first, she’s arrested. At the mercy of an older man, she has to simply sit and take it when he self-righteously bellows, “A woman should be scared of exposing herself more than anything else. So, be ashamed. These are not the old times. We have values now. Our men are becoming martyrs to protect those values.”

The overall effect is an impressive mixture of supernatural and real world scares. Iran-born, London-based filmmaker Babak Anvari earned rave reviews with this, his feature debut, in 2016. Notably, Mark Kermode picked it as his film of the year. Anvari’s sophomore effort, Transgression, is due next March. It stars Dakota Johnson, Armie Hammer, and Zazie Beetz and was produced by Megan Ellison. Moving up in the world, clearly.

Contrast that with Hideo Nakata, who was in a very different position in his career than Anvari when he made 2002’s Dark Water. By that point, Nakata had already emerged on the Japanese film scene with his seminal adaptations of Koji Suzuki’s Ringu novels. Ringu (1998) and Ringu 2 (1999) kickstarted a wave of lookalike films unseen at that volume in the horror genre since the great slasher craze of the early 80s. When the inevitable American remake The Ring arrived in 2002, Sadako (renamed Samara in the remake) had already been joined by countless other pale-skinned, long-haired, wall-climbing girl ghosts with grudges in J-Horror titles. Many of them were also eventually remade. Rather than fight it, Nakata joined the wave, delivering another little girl ghost story adapted from a Koji Suzuki story.

Hitomi Kuroko plays Yoshimi, a mother going through a divorce and a potentially rough custody battle over her daughter Ikuko (Rio Kanno). She’s told the court will likely rule in her favor, but her ex-husband’s lawyer is not above playing dirty. Meanwhile, she moves into a run-down apartment with Ikuko, enrolls her in the local kindergarten, and lands her first job since becoming a mother. It pays substantially less than what she used to make, yet she’s happy to have it.

But there’s the small matter of the clear water damage on the roof of her apartment. It starts off as an annoying stain contained to one corner before spreading everywhere. You can view it as a metaphor for how the custody battle starts civil before turning oppressive and nasty. Or you can just view it as creepy water imagery. It’s the beginning to a mystery which will eventually lead Yoshimi to discover the apartment complex appears to be haunted by the ghost of the little girl who used to live in the unit above her, and this little girl is fixated on her daughter.

It’s a rather familiar set-up to anyone steeped in the J-Horror of the era. Like Ring and Dark Water, they all tended to focus on single, working mothers and ghost women who represented more traditional female roles like wife or daughter. The subtext, as Kim Newman put it, is clearly the “unresolved issues about the place of women in contemporary Japan.”

In the case of Dark Water, Yoshimi is simply trying to be a good mother who can provide for her daughter and next thing she knows she’s dealing with the ghost of a young girl who just really wants a mother of her own. Similar to the finale of Under the Shadow, spoiler, it culminates in a truly unsettling sequence where Yoshimi has to figure out if the little girl holding her hand as they run for safety is really her daughter.

Upon its release, Dark Water was inevitably judged against Ringu. The reviews were good, but not as strong and the box office practically non-existent, especially compared to Ringu‘s record-setting run. Viewed today, however, Dark Water is clearly playing in the same pool as Ringu but maybe swimming on the opposite end (water puns are fun). This is not the same level as scary as Ringu, but it’s not really trying to be. Instead, Dark Water is more of a domestic drama. Sure, that gives way to a supernaturally-inclined second half where Junichiro Hayashi’s gripping cinematography and a truly unnerving sound design combine to deliver plenty of dread. However, the heart of the movie is a story about motherhood and the finale’s, spoiler, message of self-sacrifice is effectively heartbreaking.

Verdict: Shamefully, this was my first time watching Under the Shadow. The deafening hype surrounding it is warranted, I would say. The bigger surprise, however, was Dark Water. It’s a movie I only heard of because Mark Kermode referenced it in the intro of his Under the Shadow review. The two, it turns out, are very similar, but also different in crucial ways. Shadow leans far more into allegory and social commentary whereas Dark Water is a bit more indebted to the J-Horror boom in which it was born. Each, however, are horror stories where when you take away the scares and supernatural you’re left with leading women giving it their all for their child and their own thwarted ambitions, patriarchy be damned.

Under the Shadow is currently available on Netflix. Dark Water is on Shudder.

Tomorrow: A Ti West retrospective with House of the Devil & The Sacrament