Widows, Steve McQueen’s mid-budget prestige thriller, was supposed to open to $20m this weekend. It made just $12m. First Man, Damien Chazelle’s understated Neil Armstrong biopic, was supposed to be the toast of the awards season. Instead, it’s been buried by A Star is Born and meh reviews. McQueen and Chazelle are crashing back to Earth. What does it all mean?

Domestic box office finished at all-time high last month, putting 2018 on course to be the first year to crack the $12 billion mark. The death of the U.S. moviegoer, turns out, was greatly exaggerated or at least continues to be masked by higher ticket prices. Still, it’s a content business, and when Hollywood comes at us with movies we really want to see there’s only so much the streaming giants can do to keep us glued to Netflix at home.

The riches should only continue to flow this month with built-in audience approved films like Grinch and Fantastic Beasts 2 already out and Wreck-It Ralph 2 and Creed 2 days away. Underneath all of that, however, is the annual march of the awards contenders and most of them are stuck adjusting to the new normal where reaching $10m – not on opening weekend, but across your entire box office run – is considered a win. So, congrats, The Old Man and the Gun. You made it, just barely! So sorry Can You Ever Forgive Me?, Beautiful Boy, Suspiria, and Colette. Better luck when audiences inevitably find you on streaming and/or after the Oscar nominations are announced.

That’s to be expected. The story of the last decade of box office history has been one of retraining audiences into what they’re willing to pay to see (big budget IP, family-friendly entertainment) and what they’ll wait to see at home (the actual movies for adults). There’s precious little room for niche anymore. You’re better off taking your quirkiness to Netflix or Amazon, who crave Oscar gold like Trump craves conflict. They’ve each recently inked major, multi-picture deals, Paramount committing to Netflix, Blumhouse to Amazon, and have Apple breathing down their necks, which signed a multi-picture deal of its own with Hereditary production studio A24.

Steve McQueen could very easily have gone the streaming route with Widows, his Viola Davis-led feminist thriller about newly widowed women banding together to pay off their husbands’ debts. As opposite from his last film, 12 Years a Slave, as possible, it’s an adaptation of a 1980s British mini-series McQueen adored as a 13-year-old. He could have simply ported it to America as a limited series and the streamers would have thrown money at him. Instead, he desired the traditional theatrical release and comfort of a two-hour narrative and secured a good-sized $40m budget from Fox.

But since he’s Steve McQueen and his co-writer on the project is Gillian Flynn Widows inevitably turned into a very non-traditional version of a heist movie, playing more like an elevated prestige drama that just happens to climax with a heist sequence. 20th Century Fox’s marketing department did their best to hide that by releasing trailers promising a far more straightforward film. Opening night audiences didn’t appreciate the deception or the film or both, grading it a B on CinemaScore, an unusually low mark for a prestige awards contender.

Now, after an opening weekend 40% below expectations, Widows is going to need strong word-of-mouth and a steady stream of profile-raising awards nominations, neither of which seem to be in the offing. THR’s awards expert currently ranks Widows as a second tier awards contenders, a potential nominee in all major categories but not a front-runner. 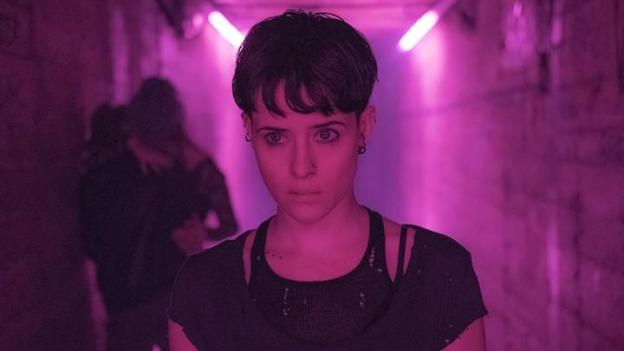 Should Widows fail to recover and fail to recoup its costs it will hardly be the only recent mid-budget studio release to disappoint. Sony’s The Girl in the Spider’s Web was DOA last weekend and will be out of the top 10 next weekend. It’s currently looking up at a rather sad $26m worldwide haul against a $43m budget, probably putting an end to Lisbeth Salander’s cinematic adventures, at least for the time being. Paramount’s WWII zombie flick Overlord may have crapped the bed in waiting until after Halloween to arrive, encountering horror movie burnout en route to eking out an anemic three-week gross of just $17m domestic. It cost twice as much as that to make and who knows how much more to market.

More notably, Universal’s First Man has struggled to appeal to anyone who wasn’t actually alive during the moon landing, putting it at $96m worldwide, $44m domestic, both of which would be decent hauls for a 2018 awards contender if not for its $59m budget. Meanwhile, A Star is Born, which opened in the same October weekend as First Man, is up to $340m worldwide.

Widows and First Man are very different movies, but their situations are similar. A filmmaker fresh off a Best Director win, 12 Years a Slave for McQueen, La La Land for Chazelle, was handed a blank-check as a reward and used it to fund something completely counter to their last project. Now, they’re being punished at the box office.

This is the way it’s supposed to work, though. Once you enjoy your big breakthrough, the industry’s supposed to rally around you and find out what you might be able to pull off with a bigger budget. See also: Paramount’s $40m bet on Alex Garland’s Annihilation. It’s always a high risk, high reward proposition, but you bet on the talent to pay off, not just as a financial bet but as a signal to the rest of the industry about the chances you’re willing to take.

20th Century Fox might not get to make too many more bets like that, not with Disney set to take over. As IndieWire argued, “Fox has presented a much more diverse release schedule [than Disney], with variable success, but standalone films like The Greatest Showman, Bohemian Rhapsody, Murder on the Orient Express, and Hidden Figures all passed $100 million. The Disney takeover includes some suggestion that the Fox production apparatus will be used in part to feed the studio’s upcoming streaming service.”

Indeed, Bob Iger indicated as much in a recent earnings call, pointing to Fox’s film studio as a potential content farm for an expanded Hulu, which will soon call the Mouse House its majority owner.

Widows was supposed to be an argument against that, proof of the viability of the old way of doing things. It still might make that case. The fight isn’t completely over. Movies tend to have much longer legs during awards season. Widows, as an adult-skewing title with awards aspects, is more likely to rebound than something like The Girl in the Spider’s Web.

However, when even the Coen Brothers and Martin Scorsese have fled to Netflix it’s a reminder of the simple truth: filmmakers have to go where the audience is. As Paul Greengrass has repeatedly admitted while promoting his Netflix Original 22 July, “If I had done an orthodox art-house release, which is all you would get for a film like this, the young people are never going to watch it. If you put it on the Netflix platform, I think millions will watch it. That’s what I wanted.”

While theatrically-released mid-budget films like Bohemian Rhapsody and A Star is Born have been recent box office surprises they remain weird aberrations. They were each bolstered in some part by their respectively massive built-in audiences (Queen and Lady Gaga fans) and successfully sold themselves as experiences, not mere movies. Widows had to sell itself as something it isn’t, and First Man went for the experience angle (Chazelle’s sets a new bar for space scenes) as well as ole “the untold true story” angle.

Both are flawed, but remarkably interesting films, of course, and since McQueen and Chazelle have already conquered prior awards seasons it’s okay if their new movies don’t quite soar as high. Chazelle, ever the workaholic, already has his next project lined up: a drama series.

He’ll write and direct every episode.

That’s just where the industry is heading right now. And you know what? I bet his series, whatever it turns into, is going to be completely binge-worthy.