When I look back at the films of 2018, I will forever remember the experiences and moments more so than the entire films. That’s not to slight the various works of cinematic genius which will deservedly win awards or popcorn movies which capably entertained. It’s just, let’s be real here: the new reality is that for every new movie there is always – always! – a better TV show, if not several of them, you could be watching at home or on your phone wherever you are. In such an environment, the movies that tend to stick out are those which do something truly extraordinary or new, offer an astoundingly profound insight into the sorrow state of the world right now, or just offer an intoxicating escape.

What I’ll Remember Most

That’s why when I look back at 2018 I most remember: Avengers: Infinity War’s snappening, the way theater audiences turned on anyone who dared to make a noise during A Quiet Place, the rock star VR simulator that is Bradley Cooper’s A Star is Born concert footage, BlacKkKlansman making sure we don’t forget Charlottesville, Black Mirror’s groundbreaking Choose-Your-Own Adventure movie, Hereditary’s shocking beheading, John Cho Searching for his daughter entirely in computer screens, Mandy’s prolonged acid trip, Aquaman’s insane special effects, and Black Panther’s Afrofuturism and #Killmongerwasright. Above all of that is Spider-Man: Into the Spider-Verse, which is truly unlike anything I’ve ever seen before and marries first-of-its-kind visuals with wickedly smart superhero storytelling. 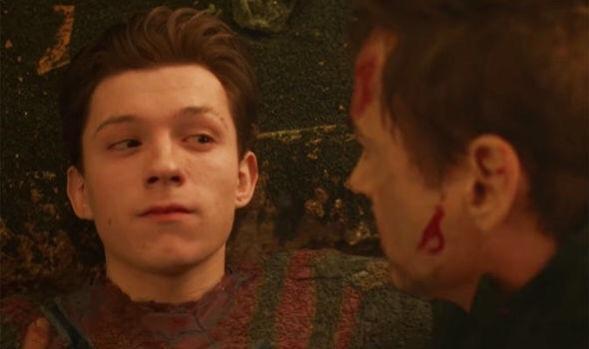 Yeah, But What About That Awesome Episode of [Insert Name of TV Show]?

Yet, at the same time I was almost as equally wowed by The Magicians’ wildly ambitious “Six Stories About Magic” episode, Mike Flanagan’s ingenious time period cross-cutting in The Haunting of Hill House, the insane twists and turns of Wild Wild Country, Forever’s episode-to-episode alterations to its own premise, the pulpy brilliance of The End of the F****** World, the sheer daring of The Good Place’s “Janet(s)” episode, the masterclass in action tension that is Bodyguard’s first episode as well as the gift to the world that is Killing Eve’s Jodie Comer. That’s to say nothing of the superior storytelling offered up by 2018’s transcendent video games God of War and Red Dead Redemption 2.

Well all just want an escape

The competition for our attention has never been more heated, and TV is, to put it mildly, kind of killing it these days, forever mocking anyone who dares to think they can watch everything. In that kind of environment, movies have to either be truly special to stand out or simply perfectly timed. Bohemian Rhapsody and Venom, for example, are not particularly good movies, but they’re the ones audiences wanted to see at just that moment. The world, now more than ever, just wants an escape, be it through a cathartic horror movie, pleasantly diverting special effects extravaganza or familiar jukebox musical, and there was certainly a lot of that on offer.

So, 2018 turned into a record-setting year at the box office, with more hits than usual – not one but three movies made more than $600m domestic! – and fewer outright bombs, or at least it until Mortal Engines and Welcome to Marwen came along. The upturn at the box office wasn’t yet another byproduct of increased ticket prices either. Attendance, for a change, was actually up. Everyone seemingly remembered how fun it is to go to the movies and/or maybe how cheap it was until MoviePass imploded. The industry’s long-delayed embrace of more diverse stories and storytellers injected some new life into some old genres, like how Crazy Rich Asians, To All the Boys I’ve Loved Before, and Love, Simon revived rom-com. And the long-promised superhero movie fatigue continued to be the “a recession is coming” argument of all cynical film pundits: if you say it every year it will eventually be true, but not yet. 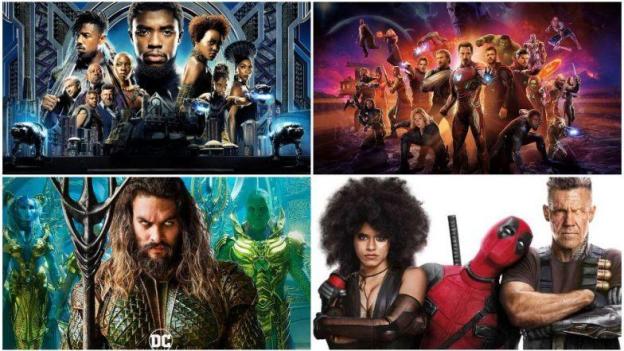 Sadly, though, I have lots of memories of seeing Oscar-caliber movies with hardly anyone else in the theater. Some of those movies, like Eighth Grade, Leave No Trace, The Hate U Give, and First Reformed, are easily among the best things to hit movie screens all year. They’ve each grown better in my mind the longer I’ve had time to think about them, yet they were probably seen by fewer combined people during their theatrical runs than Roma was in its first couple of weeks on Netflix.

I’d say welcome to the new normal, but who am I kidding? This “normal” stopped being new a couple of years ago. It’s just the way things are now and will continue to be for the foreseeable future. I’m just lucky I live somewhere which even got those movies. I can’t say the same about other 2018 indies Blindspotting, The Rider, The Death of Stalin, and If Beale Street Could Talk, and while plenty of other year-end lists, like the AVClub’s, picked Lee Chang-dong’s South Korean drama Burning as one of the best of the year I’m just left asking, “How did they even see this apparent masterpiece? It only ever played in 27 U.S. theaters and is months away from being available to rent or stream.” 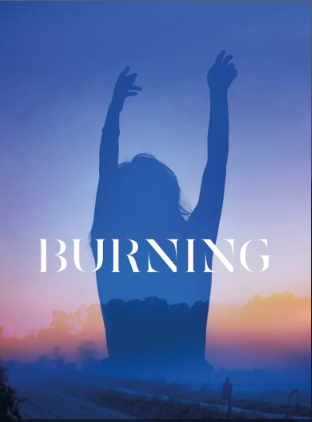 I don’t say that to complain (ok, maybe I’m a little envious). It’s more in this day and age aren’t we more duty-bound than ever to not only anoint the best of cinema but also help point audiences toward something they can actually (legally) track down. Or is it actually even more incumbent upon us to now pay extra special attention to those harder-to-find gems since they need our words of praise far more than the latest Marvel movie ever could?

Either way, as someone who loves both blockbusters and art-house fare I was well-fed in 2018, and while I feel obligated to use this space to urge you to see some of the year’s smaller efforts I also want to geek out about the nerdiest shit in theaters. I mean, the biggest movie of the year involved an intergalactic group of costumed people trying to tear an outer space power glove off the clenched fist of a giant, roided-out Grimace. On top of that, in true 2018 fashion, they failed and Grimace won! (I’m not sure who the Ronald McDonald would be in this analogy, but just go with me.) So, yeah, “Bring me Thanos!” indeed.

But what about Amandla Stenberg finding her voice and shouting “Hands up!” (shades of “We call BS!) in the face of systemic racism and police violence in The Hate U Give? Or Elsie Fisher just trying to make it through that absolute nightmare of a pool party in Eighth Grade? Or Ethan Hawke realizing a socially and spiritually isolated country priest is actually the perfect recipe for a homegrown terrorist in First Reformed? Or the parade of quality female-directed films (Leave No Trace, The Rider, You Were Never Really Here, Can You Ever Forgive Me?) no one saw? 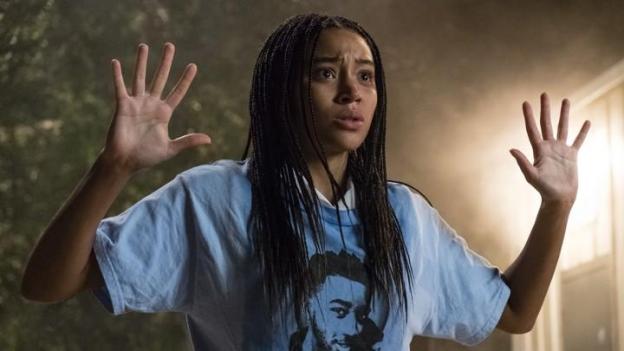 I speak of these two extremes of the film universe as if they are in competition with another. They’re not, at least not directly, but with us pretty much getting a new huge blockbuster every month or at least every other month that means fewer theaters and media coverage for anything else. Again, new normal.

There was a new Halloween movie AND it didn’t suck!

Still, 2018 was a good year for everyone who’s ever argued Hollywood needs to make movies for all audiences, not just straight white dudes just as it was a really good year for anyone who loves comic book movies and horror movies. Can we just take a minute, for example, to celebrate the fact that there was a new Halloween movie and it didn’t suck! Or that thanks to Shudder daring horror gems like Revenge and Mandy now have an obvious streaming destination after finishing their limited theatrical runs.

What to make of the awards race

Speaking of limited theatrical runs – and truly terrible segues – it was kind of a strange year for awards movies: two very similar costume dramas trying to woke up history (The Favourite, Mary Queen of Scots), two black and white autobiographical foreign movies (Cold War, Roma) vying for Best Picture, new movies from Damien Chazelle and Steve McQueen (First Man and Widows respectively) which not nearly enough people liked, and two movies from Jason Reitman (Tully, The Front Runner) which no one saw. I’ll forgive if you still don’t totally know the difference between Ben is Back, Beautiful Boy, and Boy Erased. Why were there suddenly so many movies – A Star is Born, Bohemian Rhapsody, Vox Lux – about pop stars? Or ones which ended with someone summing up the entire film in a dramatic courtroom speech (Welcome to Marwen, Can You Ever Forgive Me?, On the Basis of Sex)?

Now, thanks to Roma Oscar voters might just be forced to give Best Picture to a Netflix movie. Ted Sarandos wants that prize so much he put Roma into theaters at a complete financial loss just to pacify the traditionalists and Alfonso Cuaron, and thanks to that precedent-setting movie we can be sure Scorsese’s The Irishman and various other high profile projects will lobby for similar limited theatrical runs in the future. That’s actually a positive development, but it’s also a deeply strange one. The Great Disruptor suddenly cowed to tradition, albeit on an extremely limited basis. It helps that Roma is such a masterful work of cinema.

Yes, yes – I read your thinkpiece

Then again, the word “masterpiece” does get thrown around far too easily these days (sorry, Roma). That’s why expectations for certain films keep getting raised to insanely high levels they’ll never meet. On top of that, we do so love to argue about movies these days, each of us ready with our own hot take.

For example, art-house horror audiences and more red meat horror audiences often met in the same theater and realized they didn’t see eye to eye (sorry, Hereditary). Stark generational and political divides continue to show in the divergent responses to movies like Green Book and Vice. The “enough already” crowd, myself included, decided this was the year to stop supporting WB’s milking of the Harry Potter franchise. And elitists and far more forgiving film fans continue to disagree about Aquaman and Bird Box, so much so that James Wan is begging Aquaman fans to stop harassing those people who don’t quite share their affection for a movie about a guy looking for a magical trident even though he already has one.

I sometimes grow weary of the endless arguing, but I’m doing my best to listen and understand where the other side is coming from. Maybe Boots Riley has a point about Spike Lee over-elevating Ron Stallworth in BlacKkKlansman. Maybe the anti-Green Book crowd is right to argue old-fashioned films like that which view a black person’s oppression through a white character’s eyes actually make it harder to talk about race, not easier. Maybe Bohemian Rhapsody’s crimes against history do matter. Maybe Bandersnatch is just a gimmick hiding the inescapable sameness of Black Mirror’s storytelling, yeah, but what a gimmick!

I expect more of the same in 2019. Tons of sure-to-hit blockbusters. A handful of promising studio films. A crapton of indies we’ll never see coming. And endless time spent trying to find new, clickbaity ways to talk about all of it.

We leave behind a record-setting year with Black Panther as its top domestic hit and Roma as its possible Best Picture winner. When those are the two extremes, I’d say it was a pretty good year. What about you?

Head here to see my top 25 films of the year or stick around and take to the comments section to let me how you felt about what happened in film in 2018.