If you despise spoilers of any kind and just want to know my general opinion of Us, skip the review and jump to THE BOTTOM LINE below. If, however, you don’t mind some lite spoilers – like a description of something specific Elisabeth Moss does with her face or a general examination of the film’s themes – then keep reading.

There’s a wonderful moment in the Shudder documentary Horror Noire: A History of Black Horror where directors Rusty Cundieff (Tales from the Hood) and Ernest Dickerson (Tales from the Hood: Demon Knight) joke about Get Out’s opening scene: “Lakeith, walking down a sidewalk in a suburban neighborhood at night by himself, just talking on his cell phone? Shit, I’ve been there. It’s the perfect black horror story.”

“Perfect black horror story,” indeed. Jordan Peele remade Guess Who’s Coming to Dinner as a horror movie from the black guy’s point of view and it absolutely worked. That’s partially why Get Out became the type of breakthrough scary movie watched by a lot of people who don’t normally like scary movies.

Us, Jordan Peele’s sophomore effort, is a different beast. There’s no real “shit, I’ve been there” moment to be found. The commentary is less specific to race and more broadminded, preaching “we are our own worst enemy” in more ways than one. The horror elements are far more in your face, with plenty of “stay in the car and lock the doors!” and “he’s right behind you!” shouts from the characters and “no, don’t go in there you idiot!” cries from the audience.

It’s a technically more accomplished piece of filmmaking and shows that even though Peele won an Oscar for Get Out’s script he’s not high on his own legend yet. Get Out, as great as it is, has some slight tonal issues with Lil Rel Howery’s broad comedy scenes away from the plot rubbing awkwardly against Daniel Kaluuya’s horror scenes. Us, by contrast, is far better at integrating comedy with its horror and shows Peele’s knack for knowing exactly when to scare us and when to ease up on the tension and make us laugh. I’d argue he might actually lean just a tad too heavily on the comedy here, but the jokes made me laugh every time. So, who am I to complain?

However, Get Out’s overall story formula – hit us with the familiar before pulling the rug out from under us with a premise-altering twist – is repeated here to lesser effect. Once we know the secret behind the strangeness of Allison Williams’ family in Get Out, the film gains a considerable new thematic depth and power. The same can’t be said of Us. The big idea underpinning everything just isn’t quite as compelling and strains credulity even more.

To be clear, the twist? Not the thing you’ve already seen in the trailers! It’s something which comes much later.

The plot: A black family on vacation at their seaside summer home think they’re about to endure their own version of The Strangers or Straw Dogs when a group of hostile strangers appear in their driveway and refuses to leave. 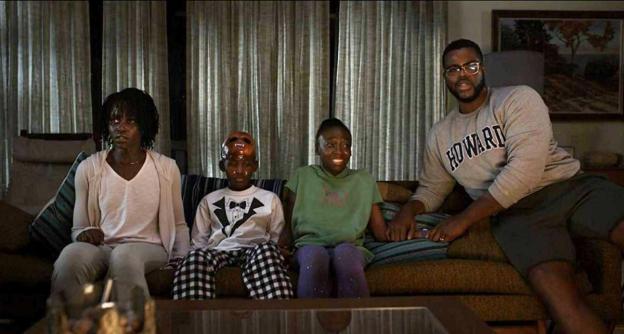 As each family member squares off against their own evil doppelganger, the film gets a lot of mileage out of assuming, “It’s pretty much inherently horrifying to have to fight someone who looks just like you, right?” Which, sure. A little. However, the family fighting off their evil twins doesn’t take up nearly as much screen time as you might expect, and even when they are around there’s still the inescapable question looming over everything:

Where did these doppelgangers come from? What do they want? And what exactly are they? When asked that last question, Adelaide’s evil other says in a rather on-the-nose thematic hatip “we are Americans,” but we know an actual explanation is waiting for us later in the story.

Except “we are Americans” does about sum it up. As IndieWire argued, “Us is through the looking glass horror that asks how Americans are going to live with ourselves after being reminded of who we really are.”

I don’t know if Peele totally pulls off that message. Us is a horror movie whose horror sequences are far more entertaining than its eventual “and this is what it all means” ending. However, Peele does more than enough to ensure the film still holds together. 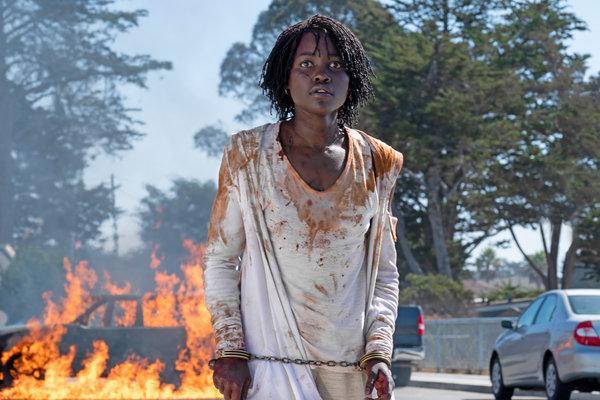 He’s helped in that process by a powerhouse central performance from Lupita Nyong’o and an unforgettable turn from Elisabeth Moss in a small supporting role. Moss pulls off a contorted, completely silent half-tortured cry/half-maniacal laugh thing that rival’s Betty Gabriel’s smile-crying in Get Out. No one’s stealing this movie from Nyong’o, though. Her dual work as Adelaide and Adelaide’s evil other mesmerizes from beginning to end.

With Get Out, Jordan Peele turned a horror movie into an Oscar winner with immediate and obvious social relevance; with Us, he’s turned a horror movie into…well, a horror movie with a somewhat muddled message about the power we have as individuals or as a people to destroy ourselves and ostracize the “other.” It’s a very different kind of movie than Get Out and its message doesn’t land quite as strongly. However, it’s the perfect movie for the moment and anyone who sees it will walk away worshipping at the altar of Lupita Nyong’o, if they aren’t already.

On first viewing, perhaps the full power of Us hasn’t sunk in for me yet or I have simply failed to truly appreciate the dramatic power of the film’s central metaphor. Or maybe others agree with me that Peele’s effort to bridge between story and theme isn’t as smoothly executed as it should be. Either way,  if you agree or disagree with my review let me know in the comments.