For a hot minute, Pet Sematary – a Monkey’s Paw story about a grieving father (Dale Midkiff) bringing his son (Miko Hughes) back from the dead thanks to a handy, dandy ancient Indian burial ground – was both Stephen King’s best-selling novel and his highest-grossing film adaptation. A subpar 1992 sequel and decades of yet more Stephen King books and movies, however, caused Pet Sematary to somewhat recede into the background, earning the title of cult classic even though unlike other cult classics it was actually a big moneymaker in its day.

Now there’s an unauthorized fan documentary, a brand new Blu-Ray release, and Paramount’s buzzy Pet Sematary remake. Like a scalpel-wielding zombie child with a twisted definition of fun, this little franchise is back from the dead.

Before heading out to see the new Pet Sematary, let’s brush up on our horror trivia about the 1989 original. I can’t tell you why exactly Fred Gwynne’s kindly old neighbor both warns and then participates in Louis Creed’s efforts to bring back the dead. That’s just a plot hole baked into the premise. I can, however, tell you why Mary Lambert ended up directing this instead of George Romero.

1. Stephen King was too horrified to finish the book until contractual obligations forced his hand

Let’s get it out of the way: Fred Gwynne’s “Sometimes, dead is better” is hands down one of the all-time greatest horror movie lines. It’s also, however, one of the most widely imitated/mocked. It became an internet meme before internet memes were a thing, making it possible for people to now do perfectly amusing Fred-Gwynne-from-Pet-Sematary impressions without even realizing that’s the exact impression they’re doing. That almost didn’t happen. Pet Sematary – the one Stephen King story to actually scare Stephen King – could have easily stayed in the desk drawer he threw it in back in 1979.

Always an author to take the almost-horrors of his everyday life and turn them into nightmare stories, King felt he’d finally gone too far with Pet Sematary.

“[It] arose from my daughter’s grief when her beloved cat, Smucky, was run over on the highway near our house,” he told The Evening Standard. “Then my little boy ran into a road and a truck was coming. I caught him by one leg and yanked him down and saved his life – which is what God made parents for, to save their kids’ lives. When I wrote about that, I did have the feeling of being on a psychiatrist’s couch articulating some traumatic possibility.”

It was too much for him – a horror scenario too horrific to ponder. He hid his manuscript away until 1982 when Doubleday needed a final book to satisfy his contract. Two years and 750,000 hardcover copies sold later, the Pet Sematary film rights sparked a bidding war.

2. Stephen King took significantly less money in return for the guarantee that he could both write the script and force them to film in Maine, a first for any movie based on his work.

The Pet Sematary film rights hit the market during a bit of a lull for King adaptations. There were already more financial misses than hits and King was still struggling to get his film version of The Stand off the ground (read more about that here). Pet Sematary was his chance for a bit of a comeback, to prove to film financiers that his books could be turned into hit movies even if the recent evidence – Firestarter (’84), Cat’s Eye (’84), Silver Bullet (’85) – said otherwise

At least one deep-pocketed studio was willing to take that chance, offering the horror maestro a cool million for the Pet Sematary film rights. However, after too many disappointments he preferred to actually take less money in exchange for more creative control. So, he sold the rights to his Creepshow producer Richard Rubinstein for just $10,000 and two guarantees: that he get to write the script and that they film it in Maine. Both would be firsts for any Stephen King movie and ultimately resulted in $1.5 million of the film’s $10 million budget going straight into the Maine economy.

Rubinstein agreed to King’s terms but it took him four years to find a studio that felt the same way. Several of them objected less to King’s demands and more to focusing a they-came-back-wrong horror story on a toddler like Gage Creed. “For us, the fact that the child was meant to be so young was what, in fact, increased the terror and impact,” Rubinstein argued. Any notes from prospective studios to age Gage up in the script went ignored.

The project eventually landed, unaltered, at Paramount after the Gulf & Western people had already passed on it twice.

3. George Romero was the original director. 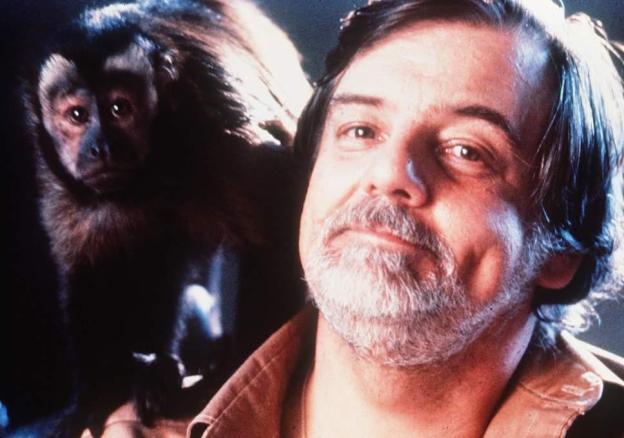 King first met George Romero and his producing partner Rubinstein in the late 70s. By 1980, they’d announced plans to collaborate on film versions of Creepshow, The Stand, and an experimental 3-D movie; by the mid-80s, all they had to show for its was Creepshow. Pet Sematary was their chance to take another step forward.

So it was that Romero spent more than a year working on the script with King and preparing effects storyboards. His deal for the project fell apart at the last minute, though. He later told Fangoria, “I was just finishing Monkey Shines when Richard got the deal to produce. He had a fixed time schedule in which to shoot and I just couldn’t make it. That was a big disappointment. I really wanted to do it.”

Also not helping: Romero left Laurel Entertainment, the company he co-founded with Rubinstein the decade prior.

The godfather of zombie cinema would have surely had a unique take on the story of a grief-stricken man dueling with his zombie son and wife. When asked by Fangoria what he would have done differently than his eventual replacement, Mary Lambert, he simply replied: “I would have made it better.” Ouch, Romero.

4. Mary Lambert got the job because she’d just made a movie about a person who couldn’t let go of a lost love. Also, she knew The Ramones. That helped.

Mary Lambert – mostly known at the time for directing Madonna’s music video – had no prior experience in the horror genre. So, she wasn’t exactly an obvious choice to replace Romero on the project. However, King and Rubinstein were drawn to her based on the following 1987 film:

That trailer feels like sizzle reel of a bunch of mid-80s famous people who just happen to be sharing the screen together here, yet, I assure you, Siesta is an actual movie, one headlined by Ellen Barkin and directed Lambert. It was her feature-length directorial debut, but it bombed. However, it was seen by enough people that mattered to earn Lambert an interview for Pet Sematary.

Taking to SciFiNow last year, Lambert noted the thematic similarities between the two projects, “Like Pet Sematary, Siesta was about obsession and the need to move on. It was about a woman who is so obsessed about the man she loves that although she is dying she can’t let go…she can’t leave the mortal plane and move on. And because she can’t she visits him in this strange alternative universe, which doesn’t exist.” 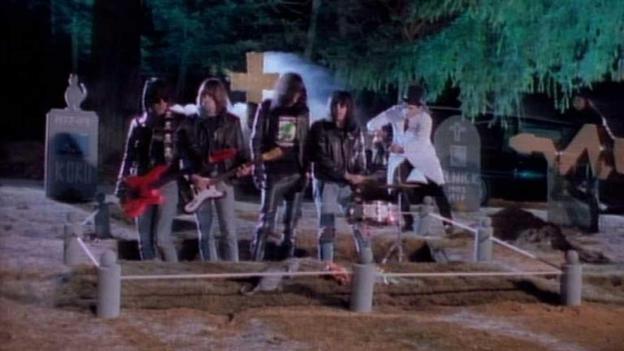 “I thought that Mary’s sensibilities were offbeat enough and perverse enough,” Rubinstein explained. “We looked at her music videos and took an educated guess that Steve and Mary would get along.”

Good guess. As Lambert argues on the film’s DVD commentary, “Stephen and I just really saw eye-to-eye on the material. And Stephen liked me. I think it was because I knew the Ramones quite well, partly because of my music video career and partly because they were in my circle of friends.” King had specifically written a Ramones song into one of the movie’s key scenes and then they ended up doing the title song for the soundtrack. 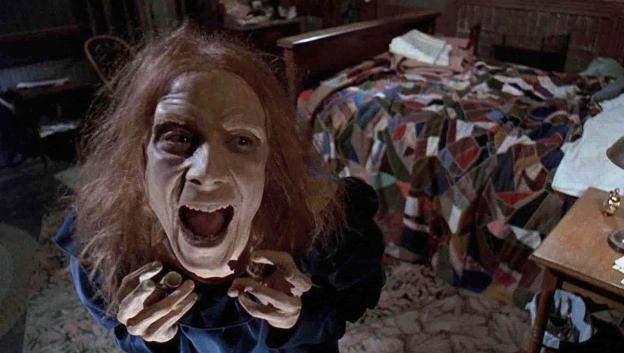 2019: Isn’t this just another way of “othering” a subgroup and advancing an irrational and ultimately irresponsible fear of the disabled?

Of course you’d say that, 2019. Wokeness aside, Pet Sematary’s flashback to Denise Crosby’s disabled sister is a seminal horror movie moment for an entire generation. (It is repeated, though altered in the remake.) Lambert wanted to honor the material and cast an actual 12-year-old girl to play Zelda. That didn’t go so well.

“All of them were so sweet and wanted to look pretty but I needed someone scary and I needed some intensity,” Lambert recalled in her SciFiNow interview. “Finally I said, ‘let’s cast a little boy’ – because these girls are just too sweet and not scary. I felt that if we made him up a little as a transdresser then there would be something slightly off about it that would translate. Also, a boy would have more energy for being and I was right!”

With the right boy – Andrew Hubatsek – cast to play the girl, Lambert’s guiding principle was to make something sure to scare her sister. “It’s a homage to one of my younger sisters who I used to torture when we were children at bedtime! I would always tell scary stories as soon as the lights were turned out, so when I was filming the Zelda sequence I channeled my sister and what would scare her the most. It ended up being very effective and really sticks in people’s minds.”

6. Almost no Miko Hughes? No fair. 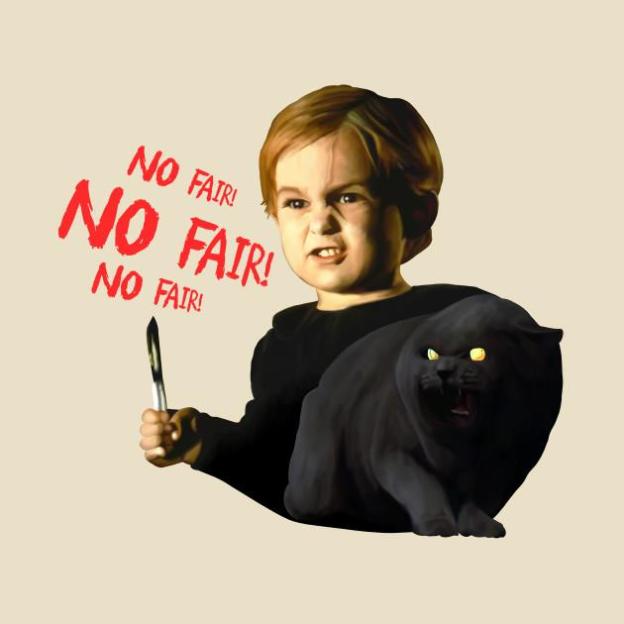 After finally relenting on their requests for Gage to be aged up in the script, the studio suggested Lambert and crew follow standard Hollywood procedure and cast twins to share the burden of playing a character so young. If Lambert had complied, we never would have ended up with Miko Hughes – well, a combination of the real Miko and a puppet version of him – unforgettably terrorizing Fred Gwynne and telling Dale Midkiff “no fair.”

Still, the studio wasn’t entirely wrong about the challenges of working with an actor that age. At three-years-old, Miko was so young when they made the movie he doesn’t really even remember doing it, at least not completely. Lambert went to bat for him because she believed he was perfect for the part. She felt the same way about Fred Gwynne for Judd and after some initial resistance, the studio agreed. The same pattern played out with Miko Hughes.

“Paramount wanted to have twins and I respected the reasoning behind that because you obviously have a lot more time with the actors if they’re duos,” Lambert told SciFiNow. “But I had a real rapport with Miko and I knew he could do it so I begged for him. He wanted to do it too. When you work with young children, one of the things you look for is their desire to do it.”

When it came time to do the sequel, Lambert’s instinct was to focus on the other child in the story – Ellie Creed, aka, the one that doesn’t get run over by a truck. This time, however, she was overruled. That’s a story for my Pet Sematary 2 list.