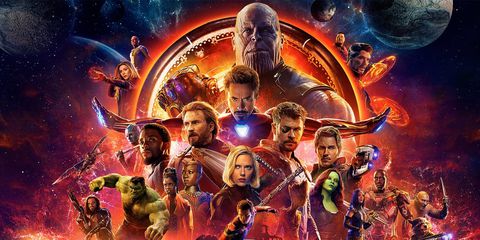 Two years ago, I watched and wrote about every single film in the Marvel Cinematic Universe. They’ve made so many more of them since then! So, now I’m watching all of the newer ones before Endgame gets here.

It’s difficult to write about the Infinity War since it’s a movie without a true ending. Only after Endgame will we know whether or not this all leads to a satisfying resolution. Until then, all that’s left to analyze is how well does Infinity War set up its conclusion and how eagerly is the viewer anticipating that conclusion.

While Infinity War’s primary narrative thrust involving Thanos (Josh Brolin) and his attempt to acquire the six infinity stones required to wipe out half the universe resolves, the attempt to rectify the Avengers’ dire straits is still to come. With that caveat in mind, I can unequivocally state that when the movie wrapped, I was ready for the conclusion right then and there. Forget sleep. I needed that closure and I needed it right at that moment. 2019 couldn’t get here soon enough.

It’s not difficult to work out why. I’ve been watching these films for more than ten years. I’m attached to these characters, especially Tony Stark and Steve Rogers. As a result, man is Infinity War a massive bummer. It’s an incredibly well-acted, well-crafted, flawlessly paced bummer, but a bummer nonetheless.

I saw it opening night, with a sold-out crowd. It was an eclectic mix of children and adults, and I remember how quiet and solemn the audience was. We were all in shock, and not even a nifty Captain Marvel teaser could shake us from our stupor.

Applauding a teaser felt almost disrespectful to the fallen characters. Knowing that certain sequel films had been greenlit and that some of these funeral bells are going to be unrung doesn’t rob the film’s closing moments of their emotional power.

Infinity War establishes this doom-laden tone from its opening moments. Remember Thor: Ragnarok’s semi-feel good ending? Asgard is destroyed, but Thor saves its citizens and learns Asgard is not the place but the people that make it special. Yeah, those citizens are space junk – including Loki, which really hurt – by the time Infinity War’s opening credits hit.

From that point on, the narrative is a series of failed plans and inevitable defeats.

It feels a bit redundant to continue to heap praise upon the Russo Brothers’ flare for balancing several, disparate narrative strands, but they continue to add more and more characters to the mix and it never feels bloated or overstuffed. That’s a major accomplishment. Look at Spider-Man 3 or X-Men: The Last Stand to see how wrong stories with multiple characters can go. It’s always exciting to see characters who have been pursuing different, similar goals finally encounter each other.

Infinity War manages to align Thor (Chris Hemsworth) with the Guardians of the Galaxy, Spider-Man (Tom Holland) and Iron Man (Robert Downey Jr.) with Dr. Strange (Benedict Cumberbatch), and Captain America (Chris Evans) with Bruce Banner (Mark Ruffalo), Vision (Paul Bettany), Scarlet Witch (Elizabeth Olsen), and eventually, Black Panther (Chadwick Boseman), and it does so in a way that feels like a logical reaction to the unfolding events rather than plot contrivance.

The Russo Brothers also deserve praise for injecting the undeniably dour proceedings with some early moments of levity. It’s nice to be able to laugh a bit before the inevitable heartbreak, and the humor feels true to the characters’ natures. After all, when you throw a bunch of emotionally dysfunctional individuals together and jostle their circumstances, you’re going to have clashes and grousing over petty grievances. Whether it’s Star-Lord’s (Chris Pratt) jealousy of Thor’s physique and commanding voice or Iron Man’s lament that Bruce Banner’s inability to summon the Hulk on command is “embarrassing him in front of the wizards,” the moments feel natural and faithful to the characters.

Such darkness is called for when you have a villain as simultaneously solemn and intimidating as Thanos. After spending nearly a decade ineffectually hovering around narrative sidelines, he emerges front and center. He lack’s Loki’s and Killmonger’s charisma, not least because it’s hard for a purple, CG alien to really be charismatic, but what he lacks in magnetism, he makes up for in formidability.

He lacks flash and his children look like Lord of the Rings villain rejects, but he’s an unstoppable force, which is almost as interesting.

There’s debate as to whether or not Thanos’s plan to wipe out half of life on the universe makes him a psychopath. I may be biased, as heavy traffic or a perusing a crowded theme park has me wishing for the ability to snap away half of humanity, but I’d argue he’s just dangerously pragmatic, illustrating that a decision made solely with dispassionate logic is indistinguishable from sociopathy. He has emotions. He grieves when he realizes Gamora’s (Zoe Saldana) sacrifice is necessary to obtain an infinity stone, but he still hurls her off of a cliff.

He thinks he’s doing the right thing, and he sets aside emotional drives to accomplish what he thinks gives the universe its best shot at survival. Josh Brolin does strong work, managing to convey a fully-fleshed out character that shines through the CG artifice.

Thematically, Infinity War feels like the inevitable result of Civil War’s fallout. The Avengers fail because they’re apart and unable to recognize that they’re at the strongest when united (something I assume will occur in Endgame). In addition, both Tony and Steve make decisions based on the same character flaws that have defined them from the beginning.

Tony perpetually tries to make himself the leader of whichever group he happens to find himself with, regardless of perception. He tries to order everyone into place for the plan he’s constructed and doesn’t take dissent well. Steve continues to push the “greater good” aside in hopes of saving Vision in much the same he’d previously done with Bucky. It’s what gets him to Wakanda, and that plot development would feel manufactured were it not so true to his character.

Of course he’d take the harder path, even if it cost him more as a result. It’s hard to argue the Wakanda portion of the film feels extraneous when it’s so illustrative of the old-school loyalty to the individual that defines Captain America is as an individual. So many plans fail because they’re separated and forced to traverse the universe for allies (Although, really Star-Lord. You had ONE job.).

If the film has a weakness, it’s that the plot is so stuffed to the brim that it has fewer character-focused scenes than previous MCU installments. The characters with the most development are Vision and the Scarlet Witch, and I have to admit, that ‘s just not a relationship that emotionally grabs me.

The film has too much to do to stop and catch its breath, and the result is the feeling that characters are being positioned on the appropriate places on a chess board. Infinity War makes me want to see Endgame, but it doesn’t make me want to revisit Infinity War very often.

That ending, though. If only Thor had aimed for the head. Seeing Thor come so close to winning only to fail and watch as Thanos snaps half the universe into dust piles feels emotionally draining and heartbreaking. The film got from me the emotions it wanted. I hated to see Bucky and T’Challa disintegrate, but it’s Peter Parker’s death that hits me the hardest.

His reaction – begging not to die, pleading for Tony to help, while Tony knows there’s nothing he can do – serves as a reminder that Peter is just a kid. He reacts to his death the way any vulnerable adolescent would: with sadness and terror. It also cashes in on the previously established father-son relationship the two share. Kudos to Holland and Downey Jr. for selling that scene as hard as they do.  I didn’t cry at the end, but if I was going to, it would have been here.

As much as Infinity War makes me want to watch Endgame, I have to admit I go into it with a bit of trepidation. I worry that I’ll have waited so long for this resolution that was set up so well, and it will feel ho-hum and anticlimactic. However, I also have faith that Marvel and the Russo brothers will actually pull off everything they’ve been setting up in a way that feels narratively thrilling and emotionally resonant. After all, I had the same worries going into Infinity War, and it works far better than it has any right to.