For a full spoiler-free film review, I highly recommend Julianne’s article over here. The following is my spoiler-free review as well as a wider reflection on what Endgame and the MCU have meant for the film industry, for better and worse.

First came the critical reviews which threw around words like “masterpiece” and “miracle” like they were going out of business. Then came the fan reviews which mostly boiled down to almost obscene excitement.

Now, however, it’s finally my turn to weigh in on Avengers: Endgame, and like Frances McDormand accepting any award in 2018, “I’ve got some things to say.” Get ready for a big ole dose of “real” because I’m about to crash this little circle jerk.

(Looks around the room – er, at a computer screen, but imagines a room full of people)

What, you expected something contrarian? I can’t do it. I can’t speak ill of this movie. Intellectually, I know it’s not perfect. Emotionally, I just don’t care. 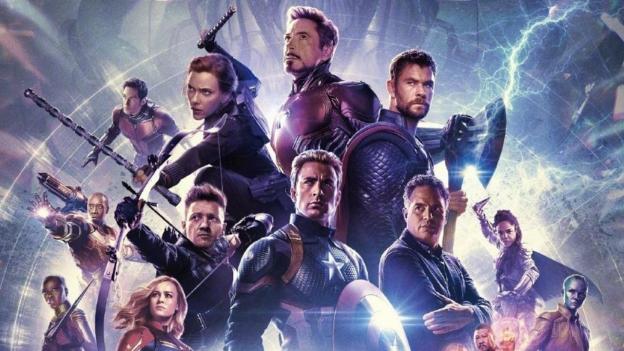 Avengers: Endgame is a cinematic experience unlike anything we’ve ever seen before or most likely will ever see again. It is a movie which blows up the idea of movies as we’ve known them. We have seen long-running film franchises end (Harry Potter, Twilight), trilogies wrap things up (Back to the Future), cinematic universes expand outward into prequels (Lord of the Rings) or long-delayed sequels (Blade Runner) or both (Star Wars).

Endgame, however, is an entirely different beast. It is the end – not even “end,” really, more a key transitionary point – of a grand experiment to serialize cinematic storytelling. In the long run, that might not even be a good thing. As Universal’s DOA Dark Universe and Warner Bros.’ now-aborted version of its DC Cinematic Universe show, the rest of the industry is really, really bad at this kind of thing.

I don’t entirely blame them, though. The film industry is meant to be good at making films. It’s right there in the name “film industry.” Marvel Studios, however, is phenomenally adept at long-form storytelling. They don’t make movies; they make glorified episodes of the best damn TV show in the world. That has been true for years, and with Endgame, they have delivered the series finale to top all series finales. This is an invaluable asset in the age of peak TV where the competition on the small screen continues to redefine what kind of storytelling we prefer.

As a film, it’s easy to think of Endgame as a mess. “If a film with this exact structure and pacing (and 181-minute run time) was made with original characters, critics would eviscerate it as self-indulgent, sloppy, and incoherent,” Tasha Robinson argued in her Verge review. She’s not wrong. You can add to that any number of surprising moments and plot turns which are sure to launch a thousand critical think pieces – here’s one now – because that’s what we do in this age of all-consuming geek culture.

As a series finale, however, Endgame feels like it was scientifically engineered to elicit joy, laughter, spontaneous applause, and tears in equal measure. Character arcs are paid off mostly to satisfaction. Goodbyes are shared. A sense of accomplishment, closure, and dramatic gravitas pervades over everything. Potential next steps are hinted at. The applause lines work. The jokes land. The action serves as a giant middle finger to anyone who ever made one of these memes:

Fine, internet, you want your stinking, character-stuffed splash page fight scene? Endgame has more of them than you can even count. Except thanks to the film’s extended runtime, there’s also a gloriously generous supply of scenes in which characters simply talk to one another – and not always just to spout out exposition! Instead, we actually sit with all of them for a bit, get a sense of where they are emotionally and what they hope to get out of their next big fight.

How this cultural moment might actually be bad for business

This particular character-heavy element might surprise the literal millions who will see or already have seen Endgame this weekend, but it’s not going to deter anyone nor should it. No, Endgame is going to break all the records everywhere. By the time it has finished at the box office, Endgame will hold so many new records we won’t even be able to tell the real from the joke anymore. For example, three months from now if you tell me BoxOfficeMojo crowned Endgame as the highest-grossing romantic comedy of all time I won’t know how that makes any sense whatsoever but I might just believe you.

That, too, is probably not a good thing. As IndieWire’s cold-splash-to-the-face article argued earlier this morning, even in wild success Endgame will most likely only make a 2% difference in the alarming year-to-year drop at the total 2019 box office. We’re currently 16% off the pace. If Endgame exceeds even the wildest expectations, we’ll probably still be 14% behind the place.

Moreover, Disney is leveraging Endgame’s hype to take a bigger-than-usual cut of the ticket sales from theaters. (The trade-off being the theaters can maybe make up the difference in concessions.) Anything due out in the next couple of weeks is sure to struggle to suck some of the cultural oxygen away from Endgame. Couple that with Disney mercilessly canceling one Fox film after another in favor of four-quadrant franchise efforts and you have the continued gentrification of mainstream Hollywood filmmaking.

With nearly $19 billion in worldwide ticket sales over the last decade, no single entity is more responsible for this change than the Marvel Cinematic Universe. Their success is what motivated Bob Iger to convert Disney into an all-franchise, no-filler machine, and thanks to the Justice Department’s almost criminal negligence on not opposing the Fox merger Iger now owns pretty much half of Hollywood.

However, at this point, that damn genie is out of the bottle, and regardless of whether or not this particular genie’s blue skin looks convincing enough – ala the Will Smith genie in Aladdin – we’re stuck with it.

Decades ago when TV came around and sucked audiences away from movies, the movie studios went bigger, bolder, and more gimmicky. It didn’t always go well. History, however, loves to repeat. So, in this past decade when faced with the unprecedented rise of Netflix and emergence of China on the global economic stage, the film studios again went bigger and more gimmicky and it again didn’t always go well. In the process, audiences have been retrained as to what they’re willing to pay to see in a theater and what they aren’t, and as any Millennial might tell you “experiences” are the in thing now.

The last ride of the monoculture

Endgame is one such experience. We’ll have a similar one later this year with Star Wars: Rise of Skywalker, a film whose title I keep thinking I’ll get used to but never do. Outside of Game of Thrones, this is the last true arena of the monoculture – the thing we all have to talk about at the same exact time.

Leaving my local AMC last night at 2 AM, I wandered the halls and noticed that literally, every single one of the theater’s 14 screens was showing Endgame. I felt like Tony Stark receiving a vision of a grim future in Age of Ultron. Not too long from now, it won’t have to be 2 AM on an opening night preview event for us to see that our local multiplex is only showing one single film or single kind of film. Heck, that kind of thing is happening now on any given night, just not always to this cartoonish extreme.

It would be easier to be mad or worried about this if Endgame wasn’t so good. The completely unprecedented nature of Endgame is exactly why everyone feels compelled to rush out and see this movie. We have to talk about it. We have to say our goodbyes to long-cherished characters and dream up future adventures for those still around. More than anything, we have to geek about this because that is what we do. That is what we have always done. Thanks to Marvel Cinematic Universe, there are literally millions of us around the world doing it now.

Endgame, luckily, is supremely worthy of all our geeky observations, reactions, criticisms, cosplaying, and memorializing. It is the partial end of a period in which pop culture changed as we knew it, and it’s still changing. Endgame, for example, sneaks in a surprisingly groundbreaking moment for MCU diversity.

However, with Disney and the MCU having conquered the movie theater and now transitioning to conquering streaming we have lost something in the process. The studios release fewer and fewer movies. Colossal, culturally significant films of our past would never be able to get made today. The Marvel mimicry is everywhere. The Fast and Furious franchise, for example, is basically an unofficial comic book movie franchise now. And even though TV has picked up the creative and production slack out of necessity it has done so with such extreme volume we are forever drowning in choices.

The old ways are gone. But, as Captain America says so eloquently in Endgame, “You’ve got to move on. You’ve got to.”

I won’t soon move on from this movie, though. In fact, I’m probably going to see it again tonight.

Cultural events like Endgame can feel hollow in the aftermath, as you realize maybe you had just been suckered by Hollywood hype. However, no amount of marketing can ever truly manufacture 11 years of serialized storytelling across 21 big budget comic book movies. Endgame is an authentic event which just begs to be experienced over and over again. As a film, it’s undeniably flawed; as an event, it has no parallel. You’d better really know your MCU, though. Endgame has little patience for casual viewers who haven’t been paying attention for the past decade.