I never can tell what Danny Boyle is going to direct next. This is the man who followed the grit of Trainspotting with the genre hodge podge and fantasy of A Life Less Ordinary. He won an Oscar for Slumdog Millionaire and then turned around and directed a harrowing drama like 127 Hours and a fantastic stage production of Frankenstein starring Benedict Cumberbatch and Johnny Lee Miller. Ever since, his projects have ranged from a Steve Jobs biopic, Trainspotting sequel, aborted James Bond project, and a little-watched limited series about John Paul Getty (Trust). Now he’s back with Yesterday, a Richard Curtis-penned fantasy yarn about a man who wakes up one day to a world where everyone other than him has no recollection of The Beatles.

It’s quite the eclectic CV, but I’ve always preferred Boyle’s genre work, like his debut feature Swallow Grave, a Hitchcockian black comedy thriller, and, of course, his modern horror classic 28 Days Later. However, I somehow completely missed his sci-fi opus Sunshine. Originally released in 2007, it’s only in recent years I’ve even learned of Sunshine’s existence, courtesy of a steady stream of articles pegging it as one of the most overlooked gems of the last 15 years. It doesn’t hurt that it stars a bunch of people – Chris Evans, Rose Byrne, Michelle Yeoh, Cillian Murphy, Benedict Wong, Mark Strong, Hiroyuki Sanada – who have since become much more famous.

The plot: “A team of international astronauts are sent on a dangerous mission to reignite the dying Sun with a nuclear fission bomb in 2057.” 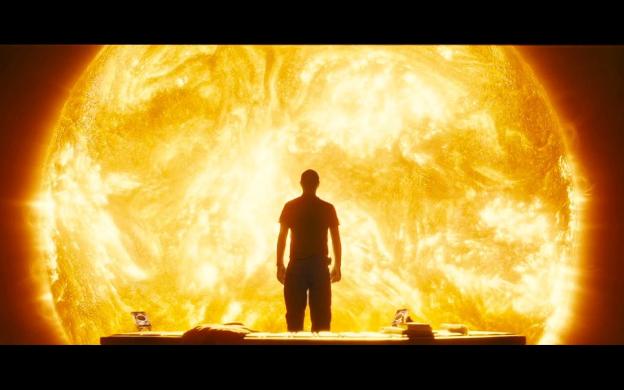 Mixing together the cinematic DNA of 2001: A Space Odyssey, Solaris, and Alien, Sunshine initially appears to be a rather recognizable story about a space mission gone wrong. Efforts to leave the ship to repair it from the outside will inevitably lead to tragedy. The sprawling cast of characters will undoubtedly dwindle down until just the biggest names are left. The unruly A.I. controlling the ship may or may not prove to be an obstacle.

However, it’s notable that their mission isn’t one of discovery or rescue but instead a last ditch effort to save Earth by repairing the sun. What goes wrong isn’t that they encounter aliens. Instead, an over-stressed, overworked member of the team (Wong) makes a series of critical miscalculations which alters the ship’s trajectory straight into solar flares.

Seemingly small derivations, but enough to help Sunshine feel new. As The Observer recently, um, observed, “Danny Boyle has made a career of taking fairly generic conventions and recasting them through a fresh lens. 28 Days Later isn’t a zombie flick, it’s an infection movie. Sunshine isn’t a flashy science fiction space adventure, it’s a claustrophobic murder thriller. Boyle sees what is and what has been and molds it into what could be.”

Indeed, once Sunshine dutifully recreates what already has been done in such a film it forges headlong into a debate about religion, explores a mystery over a possible saboteur in their midst, and frequently ruminates on that old Star Trek chestnut: do the needs of the many outweigh the needs of the few?

This all takes place in-between multiple standout action sequences, many of which have since been re-appropriated by other sci-fi movies like Star Trek Into Darkness and Interstellar. However, even with all of the rather effective action and special effects on display, some of the finest scenes involves characters figuring out who’d they push out of the airlock first once they learn they need to lose at least three crew members to have enough oxygen left to complete their mission. A pre-Captain America Chris Evans leads that particular charge, displaying his signature Steve Rogers leadership without any of the uncompromising morality.

In the end, the whole thing can be read as a parable about what to do at the end of the world. The broadly sketched characters represent differing facets of humanity – selflessness (Sanada), cold, science-driven logic (Murphy), compassion (Byrne), despair (Wong), resolve (Evans), blind, desperate faith (Strong), pragmatism (Yeoh). When you’re staring down a dispassionate force of nature, which kind of response or collection of responses will win the day? Will the sun shine kindly on humanity or with destructive rage?

If you want a version of Interstellar without all of the Christopher Nolan puzzle box machinations and “love is all we need” messaging, Sunshine is worth checking out. It’s Danny Boyle’s version of a space movie, which means it looks familiar until it finds something new to do with an oft-told story. Add a stellar cast of now instantly recognizable faces who weren’t quite as recognizable back then and you have the recipe for a film which truly deserved better when it came out over a decade ago. We’re trying to make up for that now.

Sunshine is currently available to stream on HBO Now.