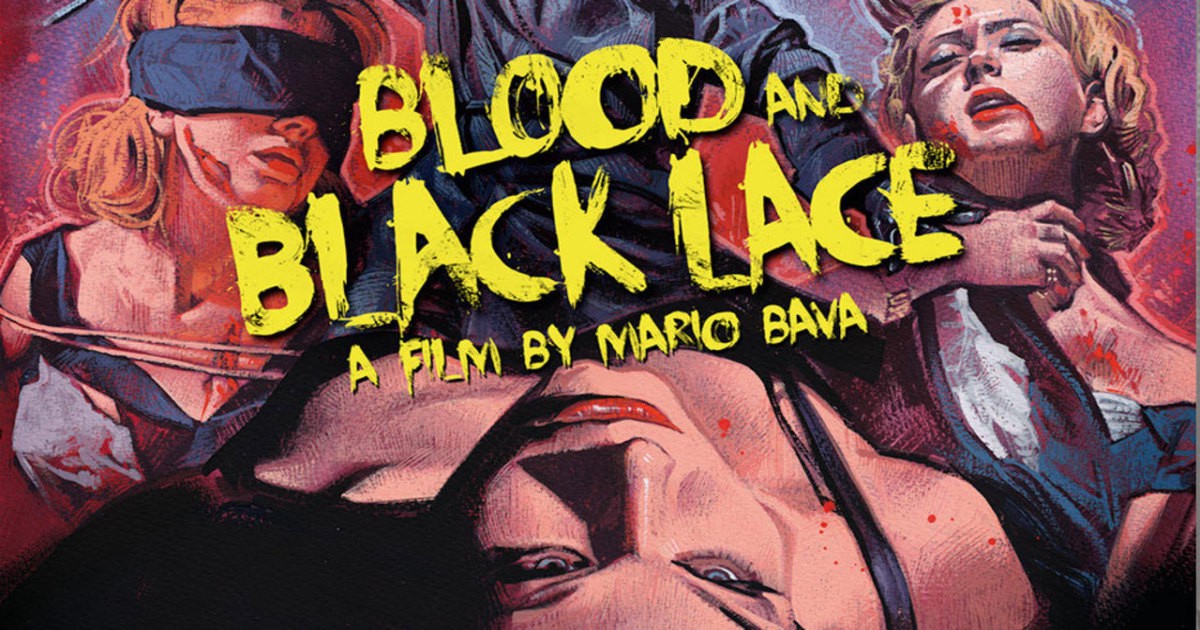 After taking in a modern, feminist slasher like The Furies, I wanted to go back to the source and visit the slasher’s cinematic roots. That journey ultimately led me to Mario Bava’s Blood and Black Lace, a movie I had never seen before, but I fear that even picking Blood and Black Lace might be fighting words to some. After all, how do you really figure out where a genre like the slasher began? Do you start with the Italian giallos of the 60s and 70s? The German krimi mystery thrillers of the 50s and 60s? What about an incredibly early body count thriller like 1932’s Thirteen Women?

Film fans love to argue about firsts. Which movie saved the comic book genre after Batman & Robin almost killed it – Blade or X-Men? Which film is most responsible for igniting the romantic comedy boom of the 90s – When Harry Met Sally or Pretty Woman? What do you consider to be the first slasher – Psycho, Peeping Tom, Blood and Black Lace, A Bay of Blood, Black Christmas, or Halloween?

The answers, of course, are X-Men, Pretty Woman, and Black Christmas. (Have at me in the comments.) In truth, however, the real answer is that it doesn’t matter. Films do not exist in a vacuum and neither do the people who make them. Everyone is influenced by everyone else, and wherever a formula can be replicated and/or slightly tweaked for artistic or financial reasons it will be. So, the life cycle of each major genre or sub-genre always comes down to a list of bellwether events intercut with all of the smaller, influential films which got us there.

So, where did the slasher really start? Hitchcock and Michael Powell laid the groundwork in 1960 (Psycho, Peeping Tom), Bob Clark fine-tuned it in 1974, narrowing the focus down to a group of isolated teenagers (Black Christmas), John Carpenter perfected it in 1978 (Halloween), and Sean Cunningham shamelessly ripped it off in 1980 (Friday the 13th).

Before Carpenter ever got there, however, Italy had already spent the better part of the 70s cranking out sordid murder mysteries with black-gloved killers, pov camerawork, killer soundtracks, and technicolor visuals. This was the giallo, a slasher precursor and the home of directors like Dario Argento, Sergio Martino, and Lucio Fulci – each of them underappreciated in their heyday but beloved horror icons now. They were preceded, however, by Mario Bava.

Between 1963 and ‘64, Bava – son to Italian film industry pioneer Eugene Bava – delivered the one-two punch of The Girl Who Knew Too Much and Blood and Black Lace. Even though the wave of imitators wouldn’t really arrive for another 4-6 years, these two films are considered to be the first of the giallo movement. The Girl Who Knew Too Much is a black and white thriller about a tourist in Rome who can’t get anyone to believe her when she says she witnessed a murder. Blood and Black Lace, filmed in vivid color, is about a mysterious masked killer knocking off a bunch of models inside an Italian fashion house.

The Girl Who Knew Too Much is the first, chronologically, but Blood and Black Lace was the first to do it in color. For that reason, Blood and Black Lace is usually picked as the more influential of the two. Eye-popping visuals, after all, are a defining characteristic of the giallo. So, I picked Blood and Black Lace. My only regret is going this long in life without watching this movie. Why hadn’t anyone told me there’s a proto-slasher where the killer looks like Rorshach from Watchmen? (Or, I guess to be more accurate about which came first, that Rorshach from Watchmen looks like the killer from a 1964 Giallo?)

From Shudder: “When young model, Isabella, is murdered by a masked killer, the employees of a chic Italian fashion house find themselves the next targets of the mysterious assailant. A missing diary, a torrid affair, deception and backstabbing are all potential motives for the fashion house slayings.”

From its wonderfully stylized opening montage to its final twist, Blood and Black Lace delivers a delightful kaleidoscope of colors and functions as an enhanting snapshot of 1960s Italy. Beyond that, even by today’s standards, it’s an obvious achievement in murder mystery storytelling. The first few minutes give us close-ups of every major character looking suspicious – acting as kind of a run-down of every possible murder suspect before the first murder has even occurred.

From that point forward, the film invites you to try and figure out who could possibly be behind that wonderfully blank mask, itself arguably a precursor to Michael Myers, and I didn’t see the inevitable killer reveal coming. Spoiler from 1964, there are actually two killers, and one of them is a woman, a fact we discover at the start of the third act as opposed to the very, very end. This lends Blood and Black Lace an added layer of fascination.

By the time the giallo morphed into the slasher and fell into the hands of the Americans, the moral majority often seized on the genre’s female skin-baring exploitation and perceived misogyny. It wasn’t until 1992 that Carol Clover’s Men, Women, and Chainsaws was published and highlighted the genre’s final girl trope.

However, when you dig as deep as the mid-60s you find a slasher precursor with not only a female killer but a female killer who – again, spoiler from 1964 – ultimately gets the best of her partner-in-crime, a traitorous man manipulating her just to get at her vast wealth. Here in its infancy, the Giallo wasn’t afraid to give the knife to a woman, a feat repeated by the slashers of the 80s but with such infrequency that films like Friday the 13th and Sleepaway Camp still stick in people’s minds as those notable slashers where the killer isn’t a dude.

The process of getting to that point with Blood and Black Lace means a series of murder set-pieces, many of which would clearly have seemed extreme to audiences of the era. (“Guaranteed! The 8 Greatest Shocks Ever Filmed” promised the fever-pitched poster.) Yet the one sequence which stands out the most is an extended abduction scene in which the killer uses hastily scribbled notes on a nearby notepad to interrogate one potential victim about the location of a diary. It ripples with intensity and tension without even a drop of blood on display. (This woman does later have her face mercilessly shoved into a hot iron. So, ya know, the violence is always around the corner.)

Like many of the films it influenced, however, Blood and Black Lace does have some inherent shortcomings. Due to its emphasis on murder scenes over character, few of the performers stand out as anything more than fodder for the slaughter. However, if the giallo was to eventually be accused of emphasizing style over substance few ever had as much with as much style as Blood and Black Lace.

For example, I’m still surprised the creepy blood-red mannequins didn’t come to life or reveal something more sinister, but the mere presence of them in the background of so many scenes just deepens the joy and utter theatricality of Blood and Black Lace.

“A lush, Technicolor extravaganza, the film introduces the rich primary colours, baroque architecture and ultramodern fashion that would come to define these films, and the notion of the giallo as a showcase for a series of graphic murder set-pieces-earning it the reputation for being ‘the first authentic body count movie.’” – Cult Cinema: An Arrow Video Companion

“This proto-slasher from Mario Bava is set in the fashion world where beautiful models are slaughtered by a killer in a trench coat, trilby and face mask. Stylishly nasty.” – TotalFilm/SFX’s Horror: The Ultimate Celebration (2019 Edition)

31 Days of Halloween So Far:

Next Up: Fashion and horror mix again decades later.