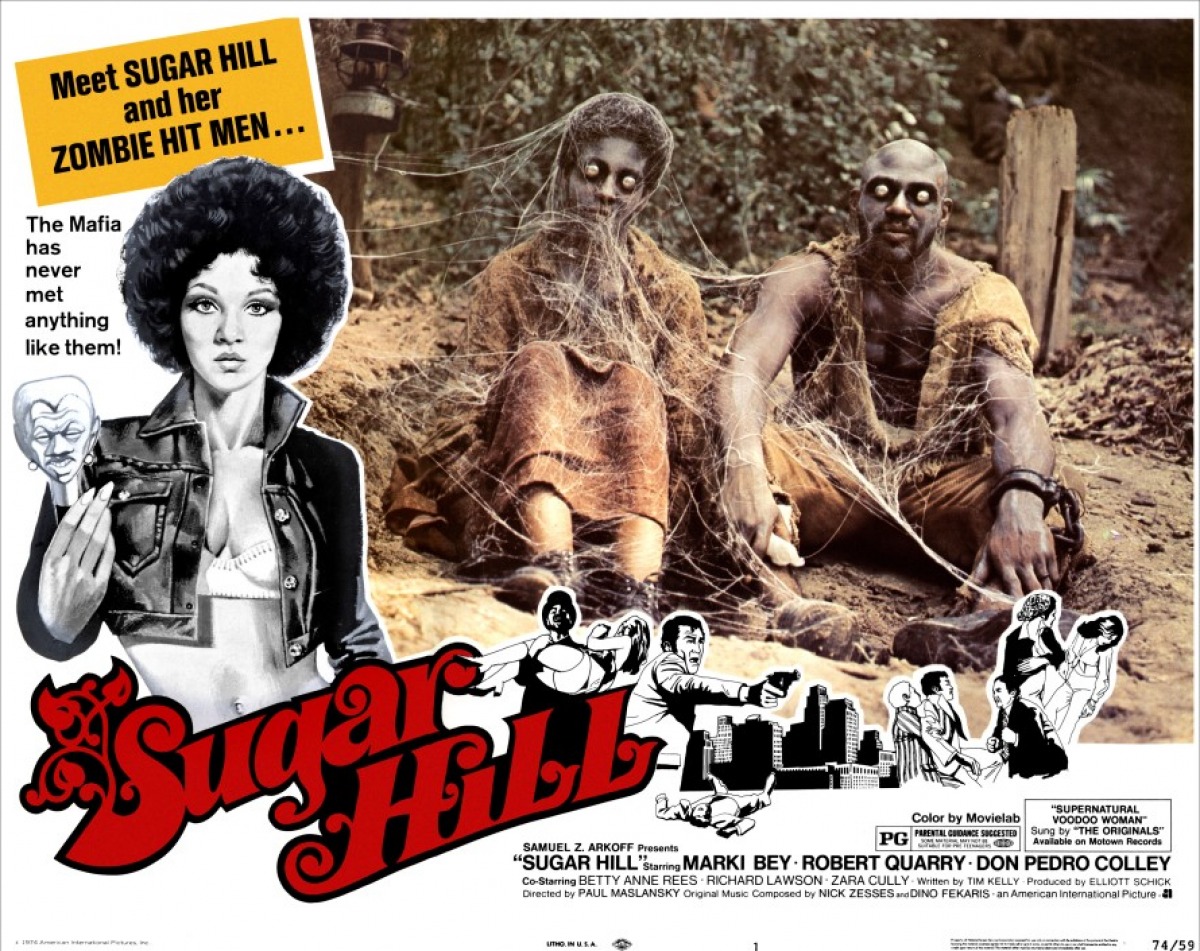 In 1974, theater owners were sent a pressbook for a unique little movie called Sugar Hill. Filmed in Houston and timed to cash in on the post-Blacula blaxploitation-horror moment, the film sees a Pam Grier type (the rather memorable Marki Bey) commanding an army of black-skinned, silver-eyed zombies in a revenge quest against the (primarily white) folk who killed her man. Today, Sugar Hill stands out as a somewhat overlooked gem of the blaxploitation era and a rather unique, non-Romero/non-brain-eating version of zombieism. It’s also one of the funkier horror movies – the film opens and closes with a Motown theme song called “Supernatural Voodoo Woman” – you could ever hope to see. Back then, however, it was just a movie looking to make a buck.

American International Pictures – the film’s distributor and also the distributor behind Blacula – had some delightfully old school exploitation ideas for how theaters could pack in the crowds. They included those ideas at the back end of Sugar Hill’s pressbook, a thing which used to be sent out to the various theaters around the country – remember, this was in the pre-multiplex, pre-AMC/Regal/Cinemark owning just about everything days – to both drum up exhibitor support and offer help with how to sell the picture to customers. Reading through it gave me a couple of laughs, but it’s also a helpful reminder of the spirit in which Sugar Hill was meant to be enjoyed.

Suggestion #1: Make a Contest Out of the Title

Blaxploitation films had a habit of creating their own kind of black, street-level superheroes, some even with their own normal job by day/vigilante by night, and as per the comic book tradition many of the films were named after their lead characters – Shaft, Coffy, Super Fly, The Mack, Black Caesar, Blacula, and, of course, Foxy Brown. Sugar Hill is no different. The title is also the character’s name, although technically her name is Diana “Sugar” Hill.

She’s a fashion photographer by day, high priestess of revenge by night. Her boyfriend Langston (Larry Johnson) is murdered by the competition/local mob after he refuses to sell his Club Haiti, the hip new joint in town which leans into the “Haiti” in its name by staging mock voodoo ceremonies which turn into groovy get-down dance parties. Grief-stricken and newly burdened by the revelation that Langston left the club to her in his will, Sugar now finds herself targeted by the very same bastards who murdered her man. So, she turns to a voodoo queen and the Lord of the Undead, Baron Samedi (a hilariously scene-stealing Don Pedro Colley), to lift the bodies of slaves from Guinea out of their shallow graves and into zombie service for her. “The mafia,” the poster promises, “has never met anything like them.”

AIP thought one way to stir interest was to ignore all the zombie and voodoo stuff and hyperfocus in on the title. Sugar Hill, after all, is also the name of several towns and communities through the United States, including a neighborhood in Harlem. Why not create a mystery around that? Hold contests where the prize of free tickets is dangled in front of anyone who can correctly guess if the title refers to a name or place.

Elsewhere in the press book, you can see that some of the local newspapers picked up on that angle, highlighting that the title refers to a woman, not a geographic location:

Suggestion #2: Why Not Just Give Out Free Candy?

Two suggestions, two strategies that have nothing to do with the movie and everything to do with the mystery of the lead character’s name. I would so like to meet anyone who was a little kid in 1974 and remembers going to Sugar Hill because their parents had been given a free bag of candy along with a flyer for the movie. Did they have any real idea of what they were in for?

Suggestion #3: Have You Thought About Putting Snakes in the Lobby?

Could you imagine walking into an AMC or Regal and seeing a real-life lion in the lobby just to promote Disney’s The Lion King? No! Also, that’d be the first real lion connected to that entirely CGI movie, but that’s neither here nor there. Back in ‘74, it was a different time. Clearly. I have no confirmation that any theaters actually did this, but the mere fact of AIP suggesting it signals a bygone era of showmanship.

Suggestion #4: Give Out Voodoo Charms to Ward Off Evil Spirits

I can’t imagine this would go over too well today.

Suggestion #5: Use the Voodoo Drums to Scare Everyone on Radio

It’s worth noting that Sugar Hill was rated PG at the time and was not re-categorized into a PG-13 once that rating was created a decade later. So, even in 2019, the MPAA believes it’s still appropriate for small children even though the N-word is dropped a time or two and the plot is essentially a body count thriller where the killers just happen to be the zombies of dead slaves from Guinea.

So, when you watch Sugar Hill you have to remember that in its day it was seen by people of all ages who may or may not have heard a “name or place contest” on the radio and/or a 30-to-60-second commercial heavily emphasizing voodoo drums. When they walked in, there may have been snakes in the lobby and before they ever got there random theater employees might have handed them a free bag of candy and/or something called an “ouanga.” Also, in the preceding two years William Marshall had played Blacula in two movies. So, blaxploitation horror was still new but not entirely novel.

In that way, sometimes the best part of a horror movie is everything surrounding the actual movie. It’s the communal experience we share, the cultural moment the film is born into, and the old school showmanship which got us into the theater.

But we can’t travel back in time to truly experience Sugar Hill in 1974. We can only watch it now. As a blaxploitation horror film, Sugar Hill is so uniquely of its time but also unique for its time. The plot is boilerplate blaxploitation, but it feels elevated by its twist on the familiar. Instead of using kung fu, guns, and a righteous attitude to seek her revenge, this particular badass woman uses voodoo. She also displays absolutely zero qualms about working with zombies and the literal Lord of the Undead. Marki Brey injects just the right amount of sass into Sugar’s every kiss-off line delivered right before Samedi and the zombies kill the latest target.

However, as GrindHhouseDatabase argued Baron Samedi steals the show, “Whether he’s disguised as a dockworker, cab driver, gardener or bartender, Colley always has such a deliciously good time of leading someone to their death that the viewer just can’t help but chuckle along with the wise-cracking Lord of the Undead.”

That’s exactly what you do with a movie like Sugar Hill – you “chuckle along” with it. I had a blast.

31 Days of Halloween So Far: