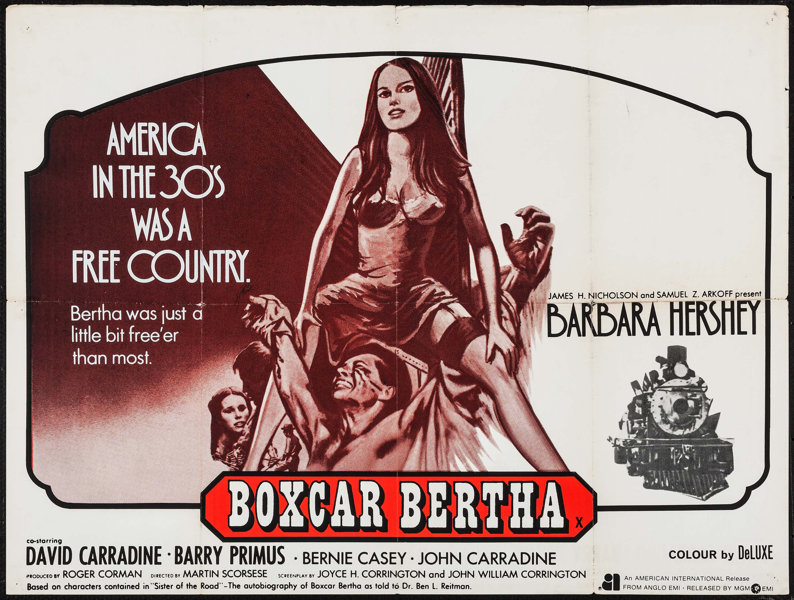 Every week in November until the Netflix debut of The Irishman, I am going to profile one lesser-known Martin Scorsese film. Today, I start with an exploitation picture that simply needed to have blood, boobs, and gore. Scorsese did all of that but with class…and, of course, shotgun blasts that literally send men flying across a railyard.

‘Boxcar’ Bertha Thompson (Barbara Hershey), a transient woman in Depression-era Arkansas, falls in love with a union organizer ’Big’ Bill Shelly (David Carradine) and ends up in a gang with him, a cowardly Yankee gambler (Barry Primus) and brave black man (Bernie Casey, still relatively new to acting after an 8-season NFL career). They start out trying to take on the corrupt railroad establishment, but when the press smears them as mere criminals they decide to just go with it, even if it does mean getting on a locomotive train to doom. Whenever they end up separated, Bertha wanders from one encounter to the next with a childlike glee for adventure.

“Mostly I attempted to show the characters as people acting like children, playing with violence until they start getting killed.”

How It Got Made

After seeing Scorsese’s 1967 debut Who’s That Knocking at My Door, Roger Corman sensed not only talent but someone who would probably work for him for cheap. So, when Scorsese made it out to Los Angeles to do some editing jobs Corman reached out and offered him the chance to direct a sequel to the 1970 gangster picture Bloody Mama. The young director said yes on the spot, but as he later recalled, “[Roger] was going away for a few months to marry Julie. I didn’t think he’d remember that he offered me the job by the time he got back.”

Indeed, Scorsese went on with his life in L.A., taking crew jobs on other movies, reveling in the creative spirit of the New Hollywood movement. Meanwhile, Roger’s new wife Julie set about finding ideas for Bloody Mama 2 and researched the history of women gangsters. She came across Sister of the Road, a 1937 pseudo-autobiography of a fictional woman named Bertha Thompson. Rather than use this material for a straight Bloody Mama sequel, they turned Sister of the Road into Boxcar Bertha.

As Julie later put it, “Everyone who came to the project had a different reason that it was their project. Roger was making the next Bloody Mama, and I saw it as a kind of statement for women’s rights. She was a free spirit, she wasn’t constrained by the things that women who were even behind the women’s lib movement were. She just got on a boxcar when she wanted to go somewhere, and then along the way, some crime developed.”

For Scorsese, as for most other directors who found their way into Roger Corman’s world, Boxcar Bertha was simply an excuse to learn on the job. He didn’t have much time to prepare. After going months without hearing anything and assuming Roger had forgotten about him, the 28-year-old director received the following offer: “You have Barbara Hershey, David Carradine, Barry Primus, and twenty-four days to shoot in in Arkansas.”

What the Critics Said At at The Time

The New York Times: “An interesting surprise beautifully directed by Martin Scorsese, who really comes into his own here.”

Roger Ebert: “Scorsese remains one of the bright young hopes of American movies.”

One of the most common narratives in any write-up or deep dive into a famous filmmaker’s career is “hey, this lesser-known film they made is actually really good.” You don’t want to be the millionth person to explain why Pulp Fiction is so clever; be the one who argues for Jackie Brown. Psycho is cinematic perfection, sure, but have you seen Lifeboat? Jaws is a classic but Duel is also worth a look.

Consider this my version of that for Martin Scorsese’s Boxcar Bertha. Released in 1972 and filmed when the director was just 28-years-old, Bertha is certainly a historical curiosity. It’s a gangster picture made in the style of Bonnie & Clyde, produced by Roger and his then-new-wife Julie Corman, and distributed by Samuel Arkoff, a man who never met a cigar he couldn’t chomp. Scorsese was handed a 200-page script loosely based on the 1937 autobiography of a made-up woman and told he could do whatever he wanted with it just as long as there was some hint of nudity every 15 minutes. Thus, Barbara Hershey’s version of Bertha wears the loosest-fitting dresses in the entirety of Dust Bowl America, and the story features a car chase, train chase, airplane crash, multiple shootouts, and shockingly violent finale.

Scorsese being Scorsese, however, he also lifted whole scenes from Godard’s Vivre Sa Vie, turned the story of four wayward hobos into a Wizard of Oz tribute, and storyboarded every single shot, about which Corman would later say, “It was the most complete preparation for a picture I had ever seen.”

The end result isn’t on the level of the director’s Mean Streets, Raging Bull, or Goodfellas, but it still makes for a fascinating viewing experience. One of the great delights of exploitation cinema is when a talented mind is handed a rigid storytelling formula and manages to somehow both honor and transcend the genre. Scorsese calls this “smuggle cinema,” and that’s exactly what Boxcar Bertha. It is such a transparent exploitation attempt at Bonnie & Clyde mimicry, yet it has a character all its own, a true eye for violence, and a surprising preference for treating the sex scenes with tenderness, an approach heightened by the IRL reality that Hershey and Carradine were lovers at the time.

I watched this on Amazon Prime. Check JustWatch for current availability.

What Could Have Been: Roger Corman’s Mean Streets?

After he finished Boxcar Bertha, John Cassavetes took Scorsese aside and verbally slapped him across the face. “Marty, you just spent a whole year of your life making a piece of shit,” Cassavetes said, pulling no punches. “It’s a good picture, but you’re better than the kinds of people who make this kind of movie…Why don’t you make a movie about something you really care about?”

Beneath the harsh language, Scorsese knew what Cassavetes actually meant: “You’re doing a genre thing, and you should be making more personal films. Get back to work on Mean Streets.”

Except Mean Streets wasn’t Mean Streets yet. At that time, it was a still-gestating script called Season of the Witch, and out of loyalty Scorsese offered it to Corman. “His brother, Gene, had just had a bit hit with Cool Breeze, which was set in Harlem.”

“And [Roger] said if you could swing and make the characters black, I’ll give you a couple of hundred thousand dollars and you can shoot it in New York. I said I would think about it, but it would have changed the whole thing. I knew I couldn’t do it as soon as I walked out of the room.”

Mean Streets, instead, came out a year later as an independent release and is usually regarded as the director’s true breakthrough project.”Yeah,” Corman probably would have asked, “but where’s the nudity every 15 minutes?”

The man had an audience to please.

Next Week: Bringing Out the Dead