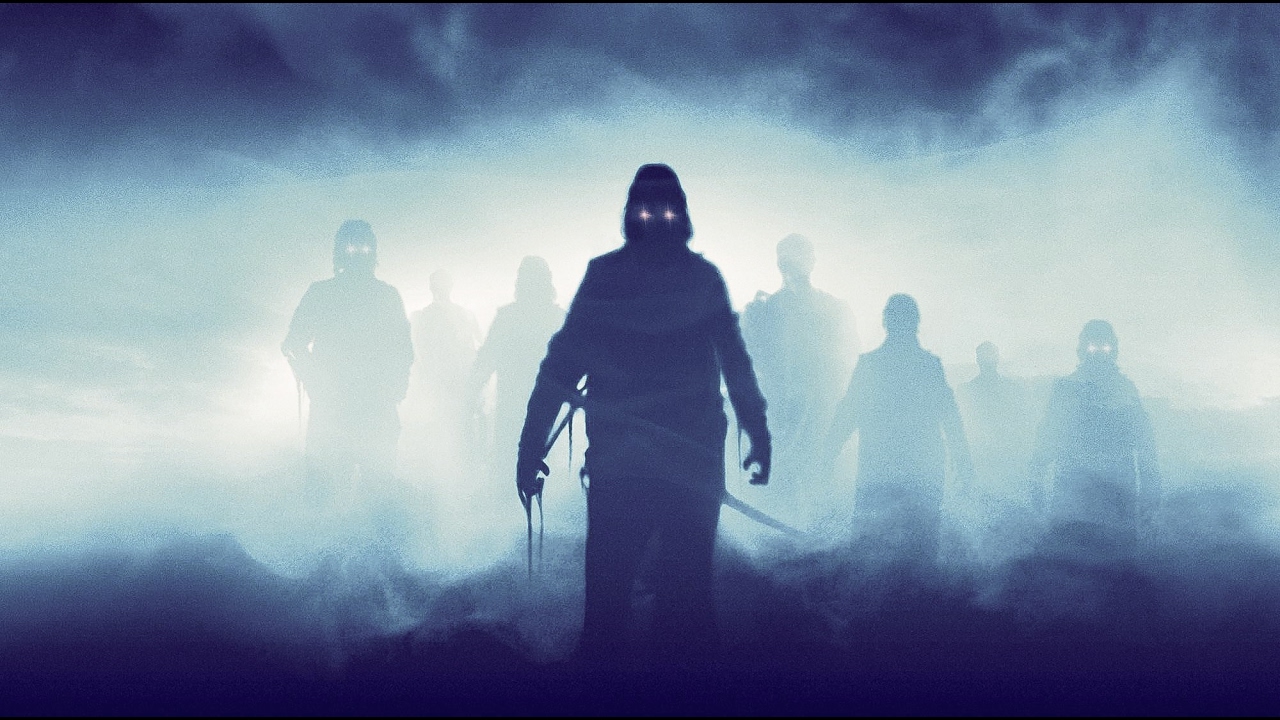 Without ghosts, there would be no Halloween. As Axelle Carolyn explained in Frightfest Guide: Ghost Movies, “The Celtic belief that souls of the deceased roamed the earth and visited loved ones at the end of October, when the veil between this world and the next was at its thinnest, led to the celebration of Samhain, which eventually morphed into our modern-day Halloween.”

Yet, here on Halloween Day 2019, I look back on all the horror movies I’ve watched this month and realize there isn’t a full-blown ghost story in the bunch. Across 30 days and 30 new-to-me horror movies, I’ve seen zombies (Anna and the Apocalypse, Little Monsters, One Cut of the Dead, Sugar Hill, Zombieland 2), cannibals (Bone Tomahawk), vampires (Near Dark, Thirst), witches (In Fabric), black-gloved killers (Blood and Black Lace), urban legends (Candyman), demons (Countdown, The Wind), monsters (Cellar Dweller,The Host), relentless creatures (Mimic, Piranha), ominous animals (Black Cat, Your Vice is a Locked Room and Only I Have the Key), psychotic men (Microwave Massacre, The Furies, The Invitation), a killer Santa (Rare Exports), the devil himself (Prince of Darkness), and, spoiler, the devil’s son (Eli).

To be fair, Eli is a ghost story until it isn’t, entirely fitting for today’s era where genre hybridization and twists upon twists are often utilized to keep us surprised. Dangit, though, sometimes I just want a good, old-fashioned ghost story. How can you have Halloween without one of those?

As luck would have it, my local, month-long horror film festival closed out its 2019 program with a 4K restoration of John Carpenter’s The Fog. I’d never seen it before. For many, The Fog is a foundational chapter in their horror education. Andy Nyman, one-half of the duo responsible for the UK’s phenomenal play-turned-movie Ghost Stories, credits The Fog has not only the first horror movie he ever saw but also the film most solely responsible for igniting his lifelong interest in specters, apparitions, and haunted houses.

So, I’m nearly 40 years late to this particular party, but for a film made in 1980 and featuring a storyline reliant on the type of fog effects anyone could make in iMovie today The Fog still spooks. As the film’s tagline promised, what you can’t see won’t hurt you…it’ll kill you!

What I Knew About The Fog Beforehand

That it’s the movie Carpenter and Hill made after Halloween and Jamie Lee Curtis is cast against type, playing a woman who sleeps with a man right away, a far cry from the virginal Laurie Strode. Also, Adrienne Barbeau is in it, and the plot has some structural similarities to Stephen King’s The Mist, which was published the same year The Fog came out. There is a 2005 remake which I’m told is quite bad.

As the seaside town of Antonio Bay prepares for its 100 year anniversary celebration, a mysterious fog rolls in, bringing vengeful ghosts wherever it lands. The ghosts, we eventually learn, have good reason to be mad and are ruthless in their pursuit of justice. The townspeople must atone for the sins of their ancestors.

While watching The Fog, the thing I thought of more than anything else wasn’t Halloween or any other John Carpenter movie. It wasn’t The Mist either, even though that film has some obvious story and visual similarities. No, I kept flashing to The Simpsons because, yeah, I’m one of those people of a certain age who sees The Simpsons in everything.

Specifically, I thought of the episode where Lisa Simpson discovers that town founder/local hero Jebediah Springfield is not at all the man history had thought he was. He was actually a scoundrel, liar, and a cheat, which puts Lisa in a bind. In honor of an anniversary, she’s set to deliver a speech about Jebediah to the entire town, and although she initially plans to hold a candle to the feet of history and finally lift the veil of hagiography which has protected Jebedia for so many years she instead rolls out the same old platitudes and stories they’ve all learned. For the good of the community, the legend, she realizes, is more important than the man.

The Fog puts Father Malone into almost that exact same position. Thanks to the fluke discovery of a centuries-old journal, he learns the truth about his ancestor and the town’s founders. They did an awful, awful thing to some people who didn’t deserve it, and for 100 years they got away with it. Now, on the night the town celebrates its anniversary isn’t it about time they all learned the truth? He’s expected to speak at the ceremony. He’ll have the platform to start the healing process.

Malone, of course, doesn’t take option A or B. Instead of perpetuating the lie or yelling the truth, he shacks up in the church and gets drunk. However, the ghosts of American history cannot be ignored so easily in this particular story. The fog brings with it a long-delayed vengeance, and like Buffy Summers and her friends fighting off Native American ghosts on Thanksgiving it’s a bit difficult to argue the other side doesn’t have a point.

The basic backstory of townspeople fooling sailors and stealing their gold is pulled from California seaside legend, but the actual inspiration came when Carpenter and Hill visited Stonehenge and noticed a rather ominous fog bank in the distance. The question “What do you think is in that fog?” got their creative motors running, which is directly translated into one of the most memorable lines of the film, DJ Wayne warning anyone listening that “there’s something in the fog.”

Released in 1980 as the first of a two-picture deal with Avco Embassy, The Fog was not only a reunion for Carpenter and Hill but also of nearly their entire Halloween crew – production designer/film editor Tommy Lee Wallace, film editor Charles Bornstein, director of photography Dean Cundey, camera operator Ray Stella, set photographer Kim Gottlieb, and, of course, stars Jamie Lee Curtis and Nancy Loomis. Their challenge was to follow up what had become at the time the highest-grossing independent film in history, but rather than give the world another Halloween they reached further back in filmic tradition and came up with an old-fashioned ghost story about a haunted town and a doomed ensemble cast.

It’s shot quite beautifully, builds its scares slowly until they hit all at once, features a signature Carpenter score, and shows us just enough to let our imaginations run wild. I was mildly stunned to learn afterward that Carpenter re-cut, re-shot, and re-structured the film during post with just three months to go before the release date. It doesn’t look like a hatchet job. Instead, it’s a solid ghost story about the night a folktale became real and ordinary citizens had to run for their lives from red-eyed, shadowy figures hiding in the fog.

Have 30 Minutes to Spare?

If so, enjoy this vintage 30-minute documentary about the making of The Fog:

According to JustWatch: You can rent The Fog on Google Play Movies, YouTube online.

Next Up: Halloween is over. No more horror movies to watch, right?