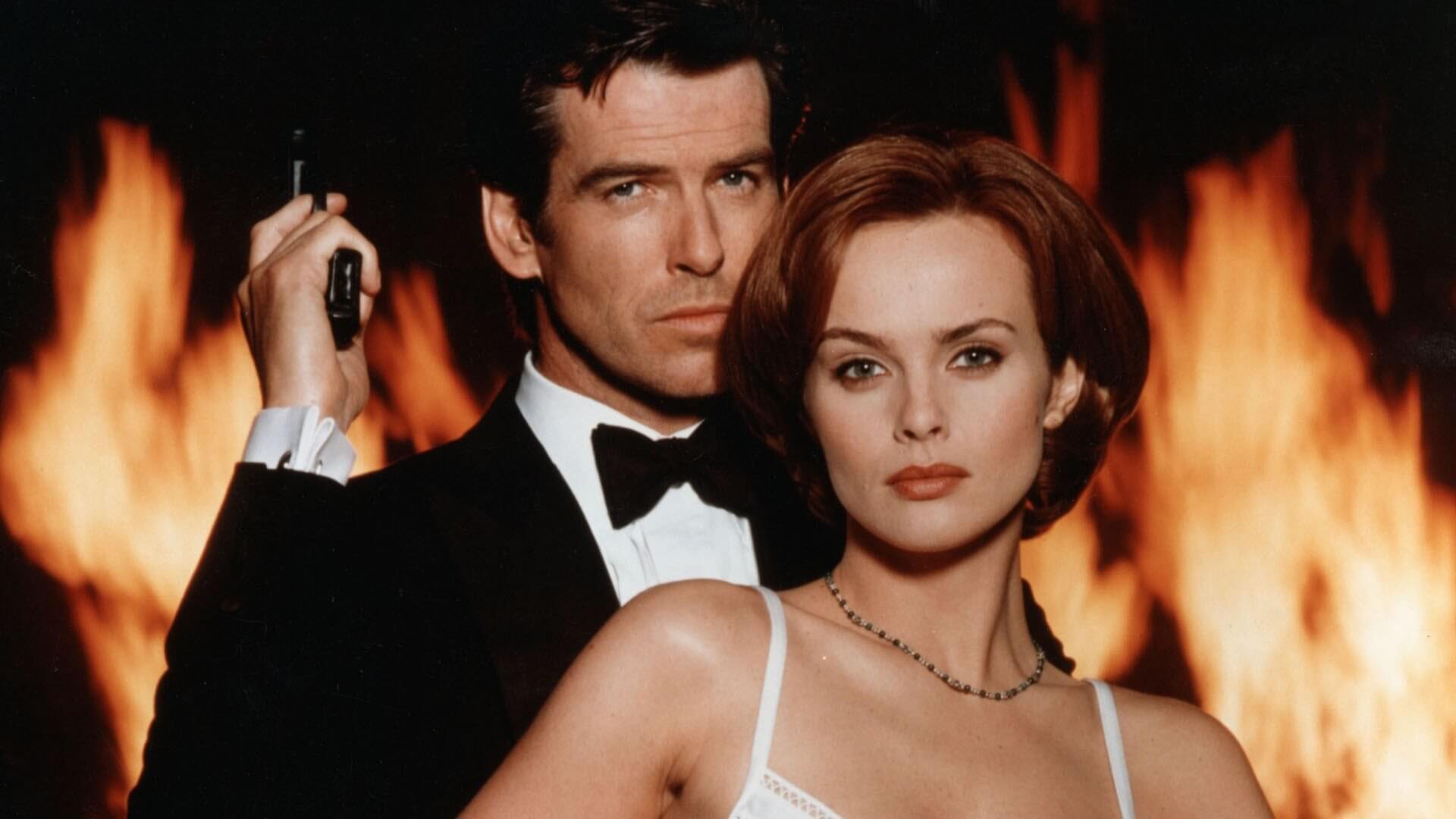 There’s a moment in 1995’s GoldenEye, in which M (Judi Dench) dismisses James Bond (now played by Pierce Brosnan) as a “a sexist, misogynist dinosaur” and a “relic of the Cold War.”

Immediately prior to this exchange, Moneypenny (Samantha Bond) informs Bond that their verbal sparring could be seen as “sexual harassment.” For better or worse, James Bond has entered the 90s. Times have changed, and the franchise decided to hang a lantern on everything that might have made Bond seem like a remnant of a bygone era.

That’s not to say EON studios was throwing out the playbook. GoldenEye, as directed by Martin Campbell, who wouldn’t return to the franchise again until Casino Royale, follows the Bondian template. We have an action-packed cold open, a threat of world-altering proportions, a virtuous Bond girl (Izabella Scorupco), a femme fatale Bond girl with a sexually charged name (a gleefully unhinged Famke Janssen as Xenia Onotopp), and an explosive finale.

However, it’s willing to bend the playbook’s rules in a way it really hadn’t before.

It opens in 1986 with Bond and fellow MI6 agent, Alec Trevelyan (Sean Bean, getting killed before killing Sean Bean was a well-worn pastime) attempting to infiltrate a chemical weapons facility in USSR.

Unfortunately, Alec is captured and seemingly killed, while Bond manages to destroy the facility prior to escaping. We then jump ahead to 1995, with Bond, still seemingly haunted by the Alec’s death, being sent on a mission to investigate the destruction of a radar facility at the hands of the Janus crime syndicate. Janus is the Roman two-faced god, who looks to both the present and the past. If you think that means Bond’s past failing might come back to threaten his future, you’ve probably seen more than your share of films.

There’s no Fleming novel for inspiration here, although the title comes from the name of Fleming’s estate in Jamaica. The primary plot centers around plans to hijack a satellite that can control Earth’s communications systems, meaning someone who controlled it could disrupt both the planet’s economy and its various government agencies, with a primary antagonist who has a personal grudge against James Bond.

Assisted by Natalya (Scorupco), a Russian computer programmer, Bond must stop whoever is trying to gain control of the satellite, and it’s a safe guess that stopping the threat will probably involve pyrotechnics.

He’ll also encounter Russian gangster Valentin Zukovsky (Robbie Coltrain, who will turn up in a later film) and CIA agent Jack Wade (Joe Don Baker, not playing the character he played in The Living Daylights) who will provide some necessary narrative complications and assistance.

There’s a theory that each Bond serves as a counterweight to the Bond that came before him. Connery’s brute appeal led to Lazenby’s preppy sincerity. Lazenby’s take on the role led to Connery being coaxed back for one final film. Roger Moore’s tongue-in-cheek, sophisticated gentleman take on the character led to Timothy Danton’s steely, ruthless portrayal. Dalton led to Brosnan, who plays Bond resurrects the suave, wryly amused approach. Craig plays the character as emotionally raw and pulsating with brute force.

It’s a slight over-simplification. Bond films and Bond actors reflect the male ideals of the times in which they exist, and masculine ideals often come in waves, but it’s true there’s a pattern of ruthless-suave-ruthless-suave that plays out in the franchise.

After Dalton’s slightly dour take on the character, Brosnan, who was originally cast prior to Dalton only to have to give up the part when his series Remington Steele was renewed for a final season, practically glides through the threats he encounters. He’s a likable Bond, playing each scene with certain wryness, while ensuring he plays it just straight enough that the audience doesn’t roll its eyes too often. The James Bond franchise sometimes dances so delicately on the line between actual spy film and spy parody, a simple raised eyebrow could tip it over. Brosnan manages to maintain the equilibrium and does so while looking gloriously photogenic.

If Moore’s take was too jokey and Dalton’s take too serious (although that’s open to interpretation), Brosnan is probably just the right blend of the two.

While lacking the introspection and character-probing that defines Craig’s tenure, Goldeneye does attempt to peel back Bond’s layers and allow the film to pick at the franchise’s cliches. Beyond M’s previously-discussed, verbal dress-down, Natalya confronts Bond’s ethos in a way neither the films nor the female supporting characters had in the past. Take the following exchange:

Natalya: He was a friend, Trevelyan?

Simonova: Now he’s your enemy and you will kill him. It is that simple?

Natalya: Unless he kills you first?

Natalya: You think I’m impressed? All of you with your guns, your killing, your death, for what? So you can be a hero? All the heroes I know are dead. How can you act like this? How can you be so cold?

Bond: It’s what keeps me alive.

Natalya: No. It’s what keeps you alone.

There’s a freshness to seeing a character actually question the central character’s inherent ruthlessness and detachment. That it’s a female character questioning a lead who hasn’t been challenged to self-reflection in the 33-years prior feels appropriately groundbreaking for the franchise. They may still ride off into the temporary sunset together, but not before she elucidates his obvious flaws.

Bond’s response isn’t a flippant quip or an attempt to deflect but an honest assessment of what he feels he must do to survive. GoldenEye works solely as a spectacle-laden entry in the Bond franchise, but it attempts something that it will go back to time and again with Craig: it picks at the character’s scabs in a way it hadn’t prior, and it features a plethora of female characters calling him out on his frequently despicable behavior.

Even the villain prods at Bond’s fundamental brokenness, questioning whether, “all the vodka martinis ever silence the screams of the men you’ve killed. Or if you find forgiveness in the arms of all those willing women for all the dead ones you failed to protect.”

GoldenEye doesn’t feel as instantly revelatory as Casino Royale will in just over a decade. After all, it still has a femme fatale who’s practically fetishism as a carbon-based life-form, but it’s a stepping stone from the previous films’ (with perhaps the exceptions of License to Kill and On Her Majesty’s Secret Service ) unwillingness to see Bond adventures as more than globetrotting, escapist fare.

It remains a fantastic Bond film and that’s not just due to fond memories of playing that awesome N64 game.

The film serves as a fine introduction to Brosnan’s tenure, illustrating all the strengths he brings to the role. He heralds an uneven time in the film’s history, but Goldeneye manages to serve up superb entertainment with a small dose of psychological insight.

This was the first Bond film I saw in theatres, giving me an eternal soft spot for both the film and Brosnan’s take on the iconic role. Yet, the film doesn’t really need rose-colored lenses to seek out its strengths. The film is Brosnan’s best and remains a top-tier Bond film.

Tomorrow: We pause to consider GoldenEye 64, the video game