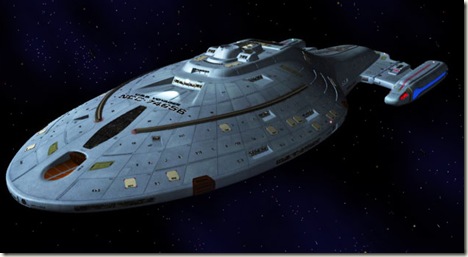 Is Star Trek: Voyager fantastic?  Whoa there, buddy.  Let’s not get crazy here.

This is often the position taken by Star Trek fans when it comes to the much maligned show Voyager.  It will have its defenders and detractors, but for the most part the show will fall somewhere in the middle.  After all, the Star Trek lights were turned off on Enterprise‘s watch, not Voyager‘s.  Heck, Kate Mulgrew’s Captain Janeway even got a cameo in the Next Generation cast film Star Trek: Nemesis.  Actually, being involved in that movie is probably not something to brag about.

But for those who dislike Voyager, what exactly is their argument?  Liam MacLeoud of DenofGeek.com, you want to take this one:

Voyager [a novel premise which would allow the writers more freedom than Rodenberry’s original limiting vision of a utopian Star Trek universe] was given every gift that the Star Trek universe had to offer and it mishandled every one of them.  Stranding the crew in the Delta Quadrant? Brilliant. Doing it by having the Captain protect a species with a lifespan shorter than my dog (oh the Ocampa)? Less so. Integrating Maquis freedom fighters into a Starfleet crew? Brilliant. Making them completely identical to the rest of the crew? Rubbish. Worse still, the show held the principles of the Federation – and by extension Rodenberry – as some kind of religious dogma, unwavering and immutable. The captain always had to be right, the prime directive could not be breached for any reason.

So, why do I kinda like Voyager?  Allow me to present:

Exhibit A: The Doctor

Consistent scene-stealer Robert Picardo‘s Doctor is one of my all-time favorite Star Trek characters.  In those episodes where he’s barely featured, he typically manages to fire off some memorable one-liners, and in his showcase episodes, which seemed to become more abundant as the show progressed, he displayed a range far removed from mere comedic relief.  For evidence, see: Season 3 episode Real Life in which the Doctor creates a holographic family to initial comedic effect before a tragic event occurs in the last act. Present from the pilot to the series finale, the Doctor evolves from a comedic presence with a knack for acerbic one-liners to a quintessential-Star Trek character striving to understand the nature of humanity and coping with/exceeding his own limitations.  Plus, even he does eventually recognize the va-va-va-voom in Seven of Nine’s walk.

Exhibit B: Seven of Nine

Jeri Ryan?  She’s kind of pretty.  This much is known.

Just look at her.  It’s hard to miss, what with her costumes on the show almost exclusively consisting of the tightest bodysuits this side of Catwoman.  In fact, Seven of Nine more resembles a comic book character than a normal human being with her exaggerated bust, thin hips, and predilection for skin-tight everything.  She was basically Data with boobs, and wore skin-hugging outfits so tight you assumed her Bog technology somehow guarded her from a need to actually breathe.

Jeri Ryan?  She’s kind of funny.  This much is not as well known.

Damn if Jeri Ryan doesn’t have impeccable comedic timing.  She joined a show full of somewhat bland characters and made them interesting by virtue of getting to act alongside her.  Poor Harry Kim’s even seems at least vaguely interesting when placed into a storyline with her.

Not too long after she came into the show it shifted into being the Seven of Nine and Doctor show featuring the not-quite-interesting-enough Voyager players.  They wisely paired their most dynamic characters, Seven of Nine and The Doctor, together in a teacher-student relationship and re-purposed the slight Father-Son relationship between Picard and Data from TNG into a mother-daughter relationship for Janeway and Seven.  By framing the relationship in this manner, it provided the often relatively formless Janeway with the central compelling, conflict-filled relationship she so sorely lacked.  This als added new dimensions to The Doctor, and provided the writers with a new Big Bad (i.e., The Borg) for the remainder of the show’s run.  This, in general, gave the show more form and direction.

Of course, Jeri Ryan give-ith but she also take-ith away.  With so many episodes devoted to the Doctor and Seven of Nine this meant less screen time for everyone else.  Plus, purists might argue that due to Seven of Nine’s prominence the show’s endless Borg-centric storylines ultimately overexposed and defanged arguably the greatest new villain of the post-Original Series Star Trek universe.  On top of that, it can be seen as a weakness of the show that given an entire new section of space to explore the unique alien threats the shows writers came up with were so bland and unmemorable so as to necessitate an infusion of something which originated elsewhere, specifically the Borg from TNG.

The endless Borg-story-lines did eventually run stale, as even when the actual Borg were not around Seven’s nanoprobes sure seemed to be the solution to or cause of way too many problems.  The show did also fail to introduce any unique threat of its own the way TNG and DSN had done with the Borg and Dominion, respectively, and Enterprise did with the Xindi afterward.  However, before the Borg storylines ran stale I found them rather entertaining.  TNG had established the Borg as originating from a different region of space which then established Voyager as having inadvertently landed behind enemy lines.  This afforded the show the opportunity to incorporate a known villain but from a new angle so as to at least initially feel unique.

Similarly, the entire notion of Seven of Nine, i.e., a Borg drone emancipated from the collective, is re-used from TNG.  However, largely due to its preference for stand-a-lone storytelling there was considerable dramatic potential from that set-up which was never explored TNG.  It may not be entirely original, but in Seven of Nine Voyager explored this set-up to its full potential.

I can intellectualize why I kinda like Voyager, and although I like DSN better The Doctor and Seven are in my top 5 modern Star Trek characters of all time meaning I like them more than almost anyone from the superior shows.   However, I cannot deny that my enjoyment might be because it was the first and only Star Trek show I watched completely first-run from start to finish.  Catching DSN through syndication in my market was a real challenge, and I barely remembered TNG beyond a handful of classic storylines.  It was not until well after Voyager was off the air that I caught up with DSN on Netflix and only recently caught up with Enterprise, also thanks to Netflix.  It is only in looking back at Voyager with more to compare it to that I recognize it was an inferior show which I still like.  At the time I first watched Voyager was on, I knew I still liked the TNG crew better, but I also know I was incredibly excited when Robert Picardo showed up in a small cameo in Star Trek: First Contact.