The following scene from Before Sunrise (1995) forces me to involuntarily exclaim “I LOVE That Scene!” whenever it is brought up in conversation. 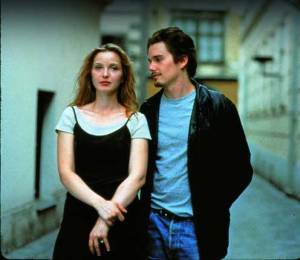 THE PLOT: Richard Linklater’s Before Sunrise, starring Ethan Hawke and Julie Delpy, tells a simple premise. Two twenty-somethings meet on a train, decide to get off said train in Budapest, and spend a day together before parting ways the next morning. What follows is a lovely series of intimate confessions and interactions that show how connected the two characters, called Jessie and Celine have become. It’s a quiet, smart, beautifully shot and acted film that only found a small audience when it was first released, but went on to gain a cult following and spawn two sequels.

(SPOILERS BELOW. READ AT YOUR OWN RISK.  YOU HAVE BEEN WARNED.)

THE CONTEXT OF THE SCENE: Jessie and Celine are sitting in a cafe. They’ve been engaging in random, philosophical discussions about their beliefs and thoughts about life. However, they haven’t really confessed much about themselves, the deep inner workings that make them who they are. Here, Celine tells Jessie she’s going to call her friend in France. She uses her fingers to mime a phone, says “ring,” and tells Jessie to pick up the phone. He follows suit, miming a phone receiver with his hand. What follows are two of the most lovely confessionals ever committed to film.

WHY I LOVE IT: The film, up to this point, has done little to tell the viewer both why Celine has decided to get off the train with Jessie and why Jessie is asking her to see Budapest with him. Here we gain a fuller, more complete understanding of the two characters we’ve been getting to know since the opening credits. I love that the scene reveals the characters’ subtle emotional depths, but does so through the facade of emotional detachment. They confess to each other through the artifice of a telephone confessional to a dear friend. At first, both seem subconscious about talking on their “phones,” but as they go on, they seem to forget they are bearing their souls to each other, and the confessions come freely. They may need a gimmick to begin to reveal themselves, but their revelations are brimming with authenticity.

In Before Sunrise, Jessie and Celine seem so sweet and fully believe in the power of small moments and human connections. In subsequent films, they are more jaded and filled with disappointments, but here they are full of hopeful optimism about life’s possibilities. In this scene, we see how willing they are to bear their souls to an individual they’ve only known for a few hours, because it feels right to do so. This is before life makes them more guarded and gun-shy about human interactions. Here, there’s an understanding about who they are and what they want out of their lives. The emo, confessional quality to these characters could come off as phenomenally irritating, but Ethan Hawke and Julie Delpy, coupled with Linklater’s script and direction, infuses them with a charming, impossible to dislike quality. We want them to thrive as much as they believe their triumphs are a certainty.

When they part, they make plans to meet up in six months, but they make plans without exchanging addresses, phone numbers, or last names. It’s a tragic oversight that goes back to the idea that they have an unnquestioninng belief that the world will work out in the favor. They’ll meet up, because the world wants them to. In the film’s sequel, Before Sunset, we learn life events kept from reuniting at that planned reencounter– a true sign the world may not care about their plans.

Before Sunset is the more interesting film, featuring characters whose blind optimism has been diminished by real-world disappointments, but it’s lovely and elating to see the exuberant, confessional twenty-somethings they had once been, and this “telephone” conversation signals a new layer of intimacy to their day and evening together.

Before Sunrise is widely available to purchase on DVD and is available to stream through Amazon (free to Prime members).

Do you have a favorite scene from Before Sunrise different from the one I highlight? Is it far too twee and quirky for your taste? Let us know in the comments.