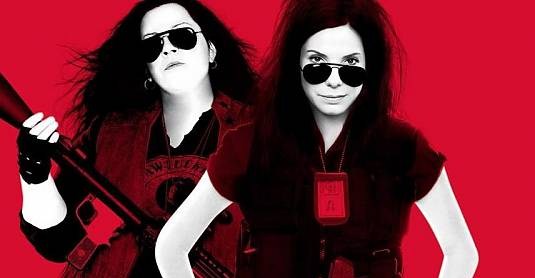 Sarah Ashburn (Sandra Bullock) is a skilled FBI investigator in New York who can dance figurative circles around her colleagues at a drug bust while failing to notice that none of them want to drive back to headquarters with her.  Her boss wants to promote her based on her stellar work record, but no one seems to particularly like her.  She’s bizarrely both overly confident and strictly by-the-book.   However, there’s a drug ring which needs busting in Boston.  If Ashburn pulls that off the promotion is her’s. 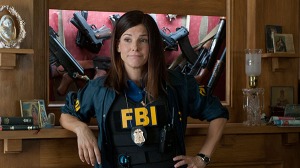 To do that, she’ll have to work with Shannon Mullins (Melissa McCarthy), a rebellious member of the Boston Police Department whose combative nature strikes fear in the hearts of both criminals and her fellow police officers.  Neither woman is particularly liked by their colleagues for different reasons, but they are good at what they do.  That’s right, you guessed it – hilarity ensues.

On multiple occasions this past December and January, while in attendance at a film I was greeted beforehand with a trailer for the Melissa McCarthy/Jason Bateman team-up Identity Thief which was then immediately followed by a trailer for The Heat.  It was as if the fates had aligned to allow audiences a brief opportunity to reject the McCarthy comedy juggernaut before it began.  Hollywood’s plans for her had been laid bare: have her do her Bridesmaids schtick in buddy-up movies with her playing a role normally given to a man.  Identity Thief was clearly a road trip movie, and The Heat a buddy cop comedy.  This was the type of thing they tried with Queen Latifah for a while after Bringing Down the House briefly made her a huge star in 2003.  Subtract Latifha, add McCarthy, rinse, repeat.

However, much to Rex Reed’s chagrin Identity Thief was a huge hit, and The Heat was pushed back nearly 3 months from its original early April release to a late June release (domestically at least).  Now that The Heat has finally arrived there is an immense temptation to tear it down.  It features Sandra Bullock playing an FBI character who is forced to come out of her social shell, and Melissa McCarthy being constantly loud and crude and oddly sexual aggressive on occasion. This is largely just Bullock doing her Miss Congeniality thing and McCarthy doing her Bridesmaids thing. 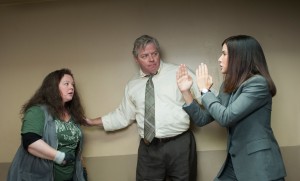 The problem, and it’s a great problem to have, with wanting to dislike The Heat is that it’s almost impossible to do.  Yes, Bullock and McCarthy are up on the screen playing the same comedic beats they’ve played elsewhere.  However, the two of them absolutely kill it as a comedy duo  In an appearance to promote The Heat on The Graham Norton Show, Bullock described her first meeting with McCarthy as being an occasion of instant chemistry, as if each could sense immediately how well paired they’d be.  Luckily, this chemistry translates to the screen, and the end result is arguably the funniest performance from either actress to this point of their career.

Of course, given the buddy cop set-up with Bullock straight-laced and McCarthy crazy it is the latter who gets most of the laughs.  Her Shannon Mullins is a foul-mouthed (heck, even I blushed a little at her unending stream of expletives) insult machine who never seems to stop talking.  MILD SPOILER ALERT She even has a fantastic Me, Myself & Irene-esque running gag of insulting an antagonistic albino DEA agent (Dan Bakkedahl), with my favorite being, “Are you upset?  You look a little pale.” END MILD SPOILER Like many film comedians before her (but very, very few female comedians), McCarthy appears to have been allowed to improv heavily, as best exemplified when Mullins addresses her police precinct to announce the search for the Chief’s testicles (she calls them “balls”).  However, the editing in The Heat usually knows just when to pull back from an extended McCarthy bit (unlike, say, the editing around Vince Vaughn in The Internship).

As with Identity Thief, McCarthy’s loudness is tempered by occasional moments of emotional clarity.  However, instead of a Identity Thief/Bridesmaids-style sober look at the character’s background in the film’s last act The Heat instead uses a scene in its first half hour to introduce Mullin’s undying love for a drug-addicted brother (Michael Rappaport) who she is devoted to helping rehabilitate.  Katie Dippold, the screenwriter whose past credits only include Parks & Recreation and MADtv, has said she used Lethal Weapon as a model for the film.  So, keeping with that, Mullins is the way she is because she is ultimately legitimately overprotective whereas Mel Gibson’s character in Lethal Weapon was so crazy mostly due to grief over his dead wife.

So, I guess that then makes Bullock this film’s Danny Glover.  However, there are really no direct comparisons between the two.  Bullock plays a character who has had to prove herself as a female in the workforce by religiously devoting herself to her work only to years down the road realize she has completely sacrificed any trace of a social life.  If there is a fault here, it is that the film is slightly more interested in exploring McCarthy’s character than Bullock’s.  Plus, McCarthy’s character remains static, meaning she does not change, while Bullock is the one who has to adjust.  In the end, it is presented as a good thing, but one suspects that Mullins has influenced Ashburn perhaps just a little too much.

Director Paul Feig and screewriter Dippold have clearly done their homework in watching plenty of buddy cop movies for tips on what to do and what to mock.  The film plays the drug king plot fairly straight, but has a lot of fun with genre conventions such as interrogation scenes (what happens if the hero is interrogated, but they don’t get off on pain the freakish way Mel Gibson always does?) and the cops having to go undercover.  The latter features an extended bit about spanx which is purely funny as a sight gag but probably far funnier for female viewers more familiar with the “body-shaping magic” that is spanx. 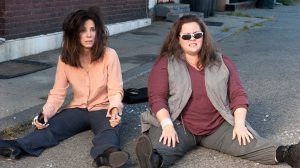 It’s impossible to discuss The Heat without acknowledging that as far as anyone can remember this is basically the first ever all-female buddy cop film.  There have been male/female buddy cop movies before (Taxi, The Gauntlet, Police Story 3: Super Cop), but nothing quite like The Heat.  However, kind of like how Bridesmaids, if we’re honest, is just a Judd Apatow movie (overly long running length and all) that happens to be centered around female characters, The Heat is pretty much just a standard buddy cop comedy that happens to feature two women at its center.  It is utterly predictable, and it does seriously rush to its conclusion.  The final act’s over-reliance on montage as a narrative shortcut is a bit distressing, as is the half-baked reveal of the identity of the big bad guy.  However, the film is just so dang funny that it all kind of works in spite of its faults.

Basically, think of a standard buddy cop movie (i.e.,  straight-laced cop partnered with a loose cannon), subtract the two male leads and substitute two female leads in their place, throw in a dash of genre parody and that’s The Heat.  However, while it may never really amount to anything more than the sum of its parts it is an undeniably hilarious film, easily among the funniest to hit screens this Summer.  If excessive swearing is a non-starter for you then avoid this film.  Otherwise, see it as soon as possible to bask in the hilarity.

End Credits Alert: Make sure to stick around during the rather brilliantly designed/art directed closing credits as there is an additional scene, a very funny one at that, which pops up around 30 seconds into the credits.