What is I LOVE That Scene? It is a regular feature on our website in which we detail one single film scene we adore. Typically, the scenes we discuss are those that force us to involuntarily exclaim “I LOVE That Scene!” when they are brought up in conversation, thus the name. It is our intention to turn readers onto films through exposure to single scenes. Spoilers will be clearly indicated.

THE FILM: The Nightmare Before Christmas (1993) 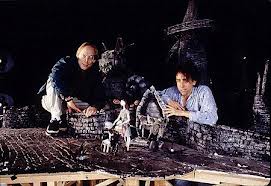 It tells a simple story about Jack Skellington, the ruler of Halloween Town, a town whose entire purpose is to create the spooks and scares that come with Halloween. The problem is Jack is bored with simply scaring people every year. He wants something new, and when he stumbles upon the bright, candy-colored world of Christmas Town, he thinks he’s found the solution to his restlessness.

This year, Halloween Town will create Christmas, with their own unique slant on the holiday. What follows is a children’s film with dark, twisted visuals, gleefully macabre characters, a romance between a skeleton and a rag doll who can sew herself back together when she is wounded,  and a message about appreciating what one has rather than seeking out new activities. The film’s stop-motion animation gives the film a beautiful, surreal, other-worldly quality and enhances the unique vision Burton and Sellick wanted for the film.

I first saw the film when I was nine. To the horror of my grandmother and concern of my mother, I loved the film completely. When it came out on video, I watched it over and over again. I’m certain my family wanted to lobotomize themselves simply to get the song, “What’s This?” from playing on endless loops in their brains. Even to this day, it’s one of my favorite films, one those holiday tradition films I watch both at Halloween and Christmas. As a child, I loved the gleefully dark tone the film had and the strange, slightly dark humor that permeated the narrative. I felt like I was watching a slightly dangerous children’s film, which made me love the film even more. Even today, my room is practically a shrine to the film, complete with a 6-foot tall Jack Skellington, various figurines, a music box, a snow globe, and multiple other bits and pieces of memorabilia.

It’s probably a film about which I couldn’t be objective if I tried, it has too much nostalgia and warmth for me to truly judge it. However, even with that caveat, I think the film works as charmingly dark, lovingly twisted film that appeals to both kids and teens alike.

(SPOILERS BELOW. READ AT YOUR OWN RISK. YOU HAVE BEEN WARNED.)

THE CONTEXT OF THE SCENE:

My favorite scene in the film comes after Jack has decided Halloween Town can create Christmas just as well as Christmas Town can and decides to put his theory to the test. He recruits Halloween Town’s citizens to make toys, create reindeer for his sleigh, and decorate the town with its own unique brand of Christmas cheer.

Check out the scene below:

WHY I LOVE IT:

For all the strange loopiness of the town’s gothic-tinged Christmas creation, the one thing that really sticks out from that scene is Halloween Town’s unreserved enthusiasm feels purer and closer to the true spirit of Christmas than the vivid, vaguely grotesque, commercial world of Christmas Town’s creations.

One may not want a bullet-ridden wooden duck or a hat made out of road kill in their stockings on Christmas Eve, but their hearts are in the right places.

They want to do well and they want to make people happy. They simply lack the awareness of Christmas expectations to carry out the holiday the way children want it celebrated. It’s easy to share Jack’s enthusiasm for what the town’s doing, even if the audience’s joy is tempered by the awareness that Jack’s vision is not going to end with celebratory bliss. His vision may be doomed to fail, but it’s impossible to feel anything but infectious enthusiasm for his goals.

Nightmare Before Christmas is available to purchase on a gorgeous blu-ray or DVD and available to stream through Nexflix.

So, what do you think, guys? Are you a fan of the film? Do you like this scene? Hate it? Think there’s another scene we should cover? Let us know in the comments!