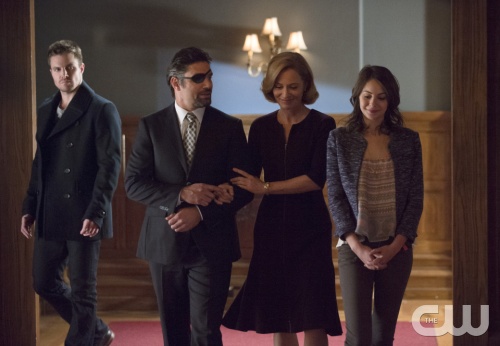 During Slade Wilson’s pleasant, leisurely chat with Moira Queen in “The Promise” – you know, the one where he was nice to Moira while exchanging “I’m going to kill you so hard” glares with Oliver – he was asked point blank whether or not he had a wife or children.  His response?  “Certainly neither.”

What the hell does that mean?  Surely, a wife can easily become an ex-wife, but unless his son died between the island flashbacks and present day Starling City machinations he still has at least one kid.  After all, the show has repeatedly indicated that at the very least Slade had a son waiting for him at home should he ever make it off the island.  Are they trying to say those lines of dialogue never happened?  Not necessarily.  Just because Slade denied the existence of an ex-wife and son doesn’t mean the show is retconning its own continuity again, like it has this entire season with Sara Lance.  At this point, Slade’s the big bad.  Surely we know not to trust everything he says.  However, it’d be nice to know for sure.

Thankfully, a fan named Heather went to TVLine’s Michael Ausiello for clarification.  Here’s what he said, with an assist from Manu Bennett:

“Though Joe has only been alluded to on occasion on the CW series, Manu Bennett mentions that relationship when discussing why Slade took Shado’s death so hard. ‘You have to remember, Slade Wilson has also got an ex-partnership and a son out in the world there somewhere. And the son’s potentially got siblings in some scenario that hasn’t yet evolved into the storyline.  People have to think about more than the layers of what is being shown in each episode. They have to find clues in the DC Comics history, to maybe even piece together more of what Slade is festering upon.'”

In the comics, Slade was an American in the United States Army whose quick rise up the ranks so impressed the female officer who trained him that she just had to marry him and bare his children.  He eventually landed in one of your standard comic book super soldier programs.  Disgusted by the corruption in the military, he became a mercenary without telling his family.  However, one of Slade’s enemies kidnapped his youngest son, Joe, ultimately slitting his throat during Slade’s rescue attempt.  Joe was rushed to the hospital and ultimately survived, though now mute.  However, Slade’s wife was so furious over the deception and harm to their son that she tried to kill Slade right then and there at the hospital, managing only to destroy his right eye.  This is when Slade became the supervillain Deathstroke, and his son, Joe, eventually became a superhero named Jericho, who was often given to serious bouts of insanity.

So, at the very least Manu Bennett certainly remembers the implication that Slade had an ex-wife/partner and at least one child out there.  This isn’t so much a plot hole as something his character either lied about, or has the benefit of knowing something we don’t, such as the possibility of his son having died in the recent past.