The CW previously revealed a headshot of Grant Gustin in costume as The Flash for the upcoming Arrow-spin-off.  Rather than do something cruel like only reveal the costume in piecemeal fashion (e.g., next we see the torso, then the upper legs, etc.) they’ve done something far more sensible: given us a full body image of Gustin as The Flash.

As observed by the AVClub, the costume “appears to be crafted from the same sporty, rubberized polymer favored by all modern superheroes for its flexibility and moisture-wicking. It also features crucial aerodynamic ridges to cut down on wind resistance around the knee area.”

I am personally not totally in love with what we’ve seen so far mostly because it’s darker than I expected.  So, there’s a period of adjustment.  Even without that, when viewed out of any scene-specific context Gustin just looks goofy in that costume, an inherent problem to most comic book superheroes.  They should drop those lightning bolts on the arms and hips, even though its faithful to the comics.  Right now, he looks like a cheap-grade version of Ben Affleck’s Daredevil: 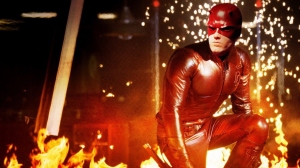 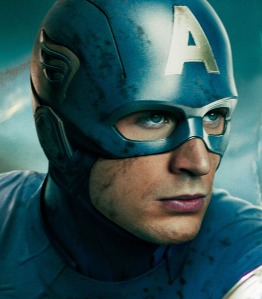 As a point of comparison, here’s The Flash in the New 52 comics: 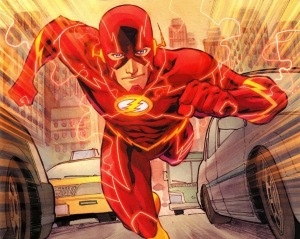 The main thing to notice is obviously that Flash’s costume in the comics is far brighter than Gustin’s, which appears to be maroon, and that his boots are a Hulk Hogan yellow whereas Gustin’s appear to be the same color as the rest of his costume.  In fact, one fan truly geeked out over that, going to TVLine.com for clarification:

“Question: Is that a yellow lightning bolt on The Flash’s leg? Maybe they wanted to break up the all-red costume but decided not to give him yellow boots like in the comics? –Gail
Ausiello: Actually, no — we did some digging around, and the bolt is red/maroon with gold stitching along the edge. There’s also some gold trim on The Flash’s boots.”

What about you – do you think of how the costume is shaping up for the CW’s The Flash?  Are you, like me, struggling to completely love it?  Or are you over the moon for it?  Let us know in the comments section.

The Flash is being co-created and produced by Arrow writer/DC Chief Creative Office Geoff Johns and Arrow co-creators/executive producers Greg Berlanti and Andrew Kreisberg.  The cast of characters will include Barry Allen (duh), his surrogate father (Detective West), his love interest/best friend (Iris West), a potential best bud (Cisco Ramon), a professional rival (Detective Thawne), a disgraced boss (Harrison Wells), a potential villain (Caitlin Snow), and a complete mystery role.  For a complete rundown, head elsewhere on the site.  Should the CW pick the pilot up to series it is expected to begin airing in the Fall at the start of the new TV season.