The Friday the 13th films were always pure and simple exercises in commerce, made for dirt cheap and delivering reliably huge returns on investment. It didn’t much matter if a particular installment was dreadful (Part V) or the best one they’d ever done (Part VI) because they always turned a tidy profit. However, those profit margins were starting to get thinner as the box office grosses continued their decline from sequel to sequel. So, by 1987 Paramount wasn’t ready to walk away from Friday the 13th, but they were looking for a way to make one last big splash.  Too bad New Line didn’t feel the same way.

[My sources from this point forward are: Crystal Lake Memories: The Complete History of Friday the 13th documentary & the companion coffee table book of the same name]

1. It was originally supposed to be Freddy Vs. Jason

By 1987, New Line’s Nightmare on Elm Street was the new horror movie franchise king, and Paramount wanted in on that but wasn’t willing to play fair.  They proposed a Freddy Vs. Jason team-up movie which they would totally control and handle domestic distribution for, giving New Line international distribution at a time when the international market was not particularly important. New Line said thanks, but no thanks (and maybe a “go to hell” thrown in for good measure), and the two sides went their separate ways.  That was okay because when Friday the 13th Executive Producer Frank Mancuso, Jr. asked Friday the 13th Part VI director Tom McLoughlin to brainstorm potential Freddy Vs. Jason story ideas he came up completely empty.

2. Why did they make it Jason Vs. Carrie?

After Freddy Vs. Jason failed to materialize, Paramount was still so high on the “Jason Vs. Blank” marketing angle they simply substituted Stephen King’s telekinetic, troubled teenager Carrie in for Freddy Krueger. Right? Bada bing, bada boom. We’ve got ourselves a movie.

Kind of. It’s not like they jumped straight from Freddy to Carrie. According to New Blood‘s screenwriter Daryl Haney, it more came about due to a last-second idea thrown out during a story pitch:

“Barbara Sachs [Part VII and VIII‘s Associate Producer] was the first person I had contact with.  I pitched her a few ideas over a payphone and she shot them all down.  I only had one more.  I said, ‘I notice that at the end of these movies there’s always a teenage girl who’s left to battle Jason by herself.  What if this girl had telekinetic powers?’ Barabara immediately said, ‘Jason Vs. Carrie, huh.  That’s an interesting idea.'”

3. It was almost Jason Voorhees Vs. Filthy Capitalists

Barbara Sachs made her producing debut with New Blood, and according to Haney she had some very non-Friday the 13th ideas, devising a preliminary story outline which borrowed heavily from Jaws:

“There was a corporate guy who was going to build these condos at Crystal Lake.  The community was saying, ‘You can’t do that because all these murders happened here and Jason will come back.’  But the corporate people were like, ‘No, we don’t care.  We just want money.’ It was great to take some jabs against capitalism and all that, but I never believed in it.  It took a long time for Jason to re-appear.  The climax she came up with had this girl trapped in a boat or helicopter while Jason closes in.”

Haney spent months adapting this outline into a script, but all of that work was trashed when Frank Mancuso, Jr. read it, hated it, and ordered Haney to start over from scratch. It’s a reminder that sometimes the people making these Friday the 13th movies clearly wanted to make something more interesting and meaningful or at least do something new with the franchise, but the adherence to routine and a low opinion of the audience usually prevented it from happening, at least until Jason Goes to Hell (let us speak it of no more).

4. From prep to the day of its release, Part VII was made in under 6 months

Friday the 13th Part VI came out in August 1986. Paramount then spent the early part of 1987 negotiating with New Line. Once that failed, Haney was hired to write the screenplay in June, but his initial draft was trashed sometime in the fall. John Carl Buechler was hired as director in November meaning they didn’t begin pre-production until December.  So, they had to prep, cast, shoot, edit, and score the film in the span of just under 6 months to make their May 13, 1988 release date.  Even by Friday the 13th standards, that was pushing it.

5. They almost accidentally cast an actress who had already appeared and died in a prior Friday the 13th film

By the time New Blood came around, not even the casting directors could keep up with the number of actors who’d already appeared and died in a Friday the 13th film. So, when Kerry Noonan arrived to her audition for the part of Tina Shepherd in  a movie called “Birthday Bash” (a fake production title) she quickly realized it was actually the next Friday the 13th. When she told the casting director she’d already played one of Jason’s victims in Part VI they responded, “I knew you looked familiar.”

6. Kane Hodder ate live worms to get the role of Jason.  Sort of.

New Blood‘s director, John Carl Buechler, came from the make-up effects world, working on multiple horror films, such as Renny Harlin’s zombie flick Prison (1988).  While on set, Buechler observed Prison stuntman/stunt coordinator Kane Hodder happily putting live night crawler worms in his mouth as part of a stunt in which he emerged from the ground. In fact, it was Hodder’s idea to put the worms in his mouth in the first place.

This level of commitment stood out to Buechler, so much so that he later insisted on casting Hodder as his Jason even though Part VI‘s Jason, C.J. Graham, was set to reprise the role.

7. The original screenwriter was fired for asking for too much money, and to this day no one will say who performed the re-writes

Daryl Haney claims he was supposed to receive $30,000 to write the story treatment, first draft, revision, and polish, but that evolved into writing 15 different drafts. In his telling, he didn’t actually ask for more money – just the $30,000 his contract called for. Others claim his agent did actually request an exorbitant raise, completely without Haney’s knowledge.

Either way, Haney was canned from the project, and the re-writes farmed out to an unknown who went by the pseudonym Manuel Fidello, Spencer Tracy’s character in Victor Fleming’s Captains Courageous (1937).  It’s been argued this “Manuel Fidello” was actually somebody with legitimate writing credits who wanted the quick cash as long as the film wouldn’t end up on his resume.

8. The infamous sleeping bag scene originally had more carnage to it than you might realize

Part of what makes it such a funny, memorable kill is that it only takes Jason one whack against the tree to execute the kill. It’s just so sudden. However, that’s not how it was filmed. Originally, Jason slammed the sleeping bag against the tree six times, more and more blood splattering with every whack. The MPAA forced them to cut out pretty much all of the swings, right in keeping with how MPAA treated the film, forcing it to be submitted 9 different times before earning an R.

9. The “sleeping bag kill” was inspired by the screenwriter’s urges to kill his own sister

According to Haney, “I used to shove my brother into a sleeping bag when I was a kid. I once had a fantasy of killing my kid sister that same way.  I guess that’s why it became so popular – people can really relate to it.”  First of all, that is not why it became so popular, or at least I hope not.  Also, could someone please check on the whereabouts of Daryl Haney’s sister?  If she’s dead, and it somehow involved a bloody sleeping bag we have a good idea who to blame.

10. That ending was never going to make sense, but it was originally supposed to look a lot cooler

If Jason actually had any kind of capacity for cogent thought at that point in his existence he might be pondering two rather obvious questions, “Who the hell is this middle-aged man, and why is he pulling me to the bottom of the lake?”

Hindsight being what it is, Daryl Haney now admits this conclusion was a stupid mistake, but it was there in his very first draft of the screenplay, except at that point the climax was in a condo. John Carl Buechler thought if they were going to do it then Tina’s dad needed to come up out of that water looking almost as gnarly and decayed as Jason since he was supposed to have been dead at the bottom of the Lake for just as long. So, this is what the dad was supposed to look like: 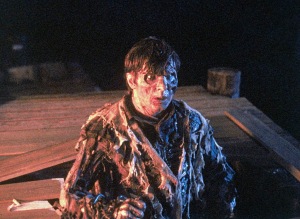 Buechler was overruled by Sachs, who thought it looked equal parts disgusting and silly. So, instead they threw some traces of mud on the guy’s face and called it good. Problem solved?

11. They set a record for longest uninterrupted on-screen controlled burn in Hollywood history

During Tina’s epic telekinetic beat-down of Jason, she uses her powers to cause a nearby furnace to do this:

To accomplish this effect, they used a rigged apparatus to actually capture the ignition on film. In that moment, you are actually watching Kane Hodder truly being set on fire, an effect normally accomplished at the time via trick photography.  Hodder stayed on fire for a then-record-setting 40 seconds.

In that same spirit, New Blood was originally meant to end with Jason emerging from his watery grave, upsetting a peaceful sequence involving a Crystal Lake fisherman, clearly ignoring the “No Fishing-Beware Homicidal Zombie” sign.  Then this happened:

Fatal Attraction, released while they were making New Blood, took the “one last scare” trope mainstream.  Audiences ate it up, but the film’s popularity and Friday the 13th-esque ending brought unwanted ridicule to Frank Mancuso, Jr., who was still struggling to be taken seriously in Hollywood after having built his career producing Friday the 13th sequels.  So, he decided to drop the business with the fisherman entirely, sensing that maybe the last second scare trope was a bit played out.

13. Not even the director knows what the heck “New Blood” is supposed to mean

Really? It seems like a fairly obvious reference to Tina Shepherd, stepping in as Jason’s new chief adversary after he’d battled Tommy Jarvis for 3 straight movies. However, neither Daryl Haney nor John Carl Buechler had anything do with attaching that particular subtitle to the film.  Buechler wanted to simply call it Friday the 13th: Part VII because he thought seven was “sort of a magical number,” and to this day he doesn’t fully understand what “New Blood” is supposed to mean.  I guess for a variety of reasons Paramount couldn’t be honest and just call it Friday the 13th VII: Jason Vs. Telekinetic Teenage Girl Who We Are Not Legally Allowed to Refer to As Carrie or Friday the 13th VII: Don’t Worry. We’ve Only Got One or Two More Of These In Us.

Next Friday, we’ll tell you why Jason’s Manhattan looked so much like Vancouver (the answer is pretty obvious) in Part 8.

You can also just use the following links to check out all of our other “13 Things…” lists: Friday the 13th, Part 2, Part 3, The Final Chapter, A New Beginning, Jason Lives, Jason Takes Manhattan, Jason Goes to Hell, Jason X, Freddy Vs. Jason, and Friday the 13th (2009).

You can also check out our lists for the Nightmare on Elm Street and Halloween franchises.

The Making of Friday the 13th Part VII: The New Blood: