It’s been a long time since X-Men: Days of Future Past director Bryan Singer helmed X2 (2003) to near-perfection.  Since then, Singer notoriously went way over budget with 2006’s Superman Lives, and did it again with last year’s Jack the Giant Slayer, which turned into one of the biggest box office bombs in film history.  Now, with a budget somewhere between $210-237 million Singer has turned Days of Future Past into the second most expensive film in the 79 year history of 20th Century Fox, trailing only James Cameron’s Avatar.  All of this for a X-Men film franchise which is in clear domestic box office decline.  Each franchise entry since X-Men: The Last Stand – X-Men Origins: Wolverine, X-Men: First Class, The Wolverine – finished with a lower domestic gross than the X-Men film that preceded it.  Of those three, only The Wolverine truly made up for it with a manageable budget and unexpectedly strong international play.

Fox is clearly undeterred, though.  Over the weekend they announced release dates for three more X-Men films beyond Days of Future Past: a direct sequel in X-Men: Apocalypse (5/27/16), another solo Wolverine title in March 2017, and a mystery project for 7/13/18 (likely either a straight sequel to Apocalypse or X-Men spin-off X-Force or a X-Men/Fantastic Four cross-over).  So, clearly Days of Future Past better not suck, or at least not suck so bad that world of mouth will prevent it from making enough to compensate for its inflated budget.  Thankfully, the footage they showed in the teaser trailer looked promising.  Less encouraging, though, were the 25 character posters they released as special 25th Anniversary Limited Edition covers of Empire Magazine, many of which were met with ridicule (particularly the character designs for Quicksilver and The Sentinels).

To go along with the trailer, here’s the somewhat uninspiring poster: 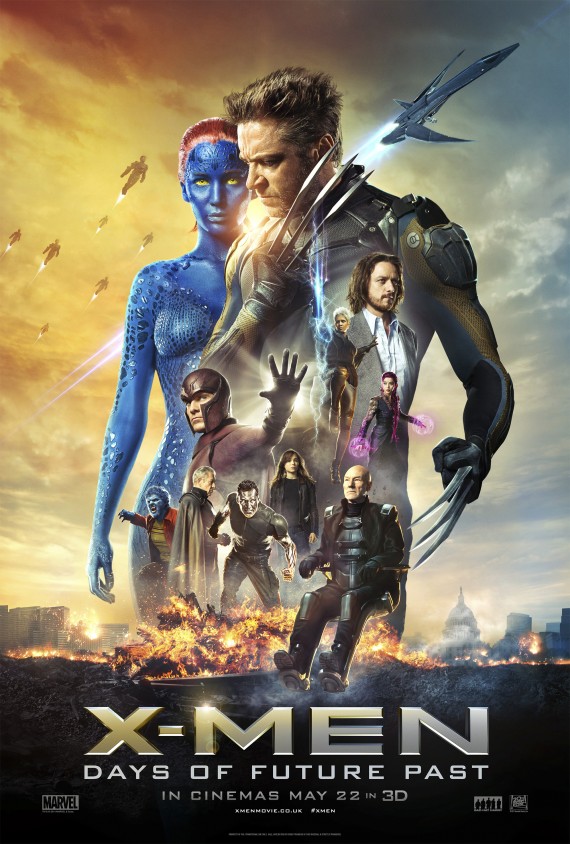 First of all, Fox clearly knows who their stars are: hello giant-sized Hugh Jackman and Jennifer Lawrence.  Second of all, could they have picked a more unfortunate spot in that image to place a seated Professor X?  He looks as if he’s been propelled into the air by the fire below him, yet judging by the expression on Patrick Stewart’s face he’s totally cool with it.

As for the trailer, it’s interesting how these comic book superhero movies have evolved ever since the first X-Men and Spider-Man films arrived at the dawn of the new century to help us forget the sensory overload of Joel Schumacher’s Batman.  As we adjust to the universes established in these films they can start expanding to include more extreme story elements and settings.  Marvel Studios is going galactic, previewed in Thor: The Dark World but about to get a lot weirder with the Guardians of the Galaxy.  Now, X-Men is heading into more straight science-fiction territory by utilizing a Terminator-esque time travel concept to bridge the gaps between the original trilogy characters and their younger First Class counterparts.  That’s going to require a compelling story and masterful pacing via judicious editing to work. To further complicate things (and possibly as a means of outdoing The Avengers) Days of Future Past carries a roster of somewhere around 20 comic book-based mutants, even after cutting Anna Paquin’s Rogue.  That is an impossible number of characters, which calls to mind unpleasant memories of the mutant overloaded X-Men: The Last Stand.

So, yes, this trailer serves up catnip for the hardcore faithful, such as Sunspot’s fiery transformation, Iceman’s infamous ice slide, and possibly even a surprise inclusion of the robot villain Fury.  However, if you don’t know who Sunspot is then does that moment actually mean anything to you?  Maybe just that it looked cool since the action, in general, appears top-notch.  With a cast including the likes of supremely talented actors like Patrick Stewart, Ian McKellan, James McAvoy, Michael Fassbender, Hugh Jackman, Jennifer Lawrence, and Peter Dinklage we can expect the performances to be stellar.  Actually, my inner X-Men geek is starting to bubble over because just the thought of Stewart’s Professor Xavier interacting with McAvoy’s Xavier is giving me a joygasm. Who am I kidding?  I will be there opening weekend, goofy Empire covers be damned.  However, I go in with low expectations.  I don’t know if seeing these characters together will be cool enough to distract from story deficiencies and plot holes, the way it was for Joss Whedon’s The Avengers.   I also don’t know what a poor box office performance for Days of Future Past might mean for Fox’s long-term plans.  I just know I’ll be there, bub.

What about you?  What did you think of the trailer?  Let us know in the comments section. .