Gotham is the Point B of TV shows.  What I mean by that is that Points A and C of the Batman origin story are universally known.  A rich kid watches his parents killed in front of him, grows up to become a masked vigilante called Batman because criminals are “a superstitious and cowardly lot.”  He’s assisted in his crime-fighting efforts by Police Commissioner Gordon, a mustached gentlemen who seems to spend most of his time hanging out on rooftops, waiting for Batman to show up .  Point B in that linear sequence used to be, “Yeah, but how does he become Batman, exactly?”  We got the “why” part of the question (grief over his parents) but not the how, and then along came Frank Miller’s iconic 1980s graphic novel Batman: Year One, which not only covered Batman’s earliest crimefighting days but also Jim Gordon’s arrival in Gotham City and first days on the police force.  In 2005, Christopher Nolan put the definitive stamp on the story with Batman Begins, which lifted its ideas (and, in some cases, entire scenes) directly from Year One, among other comic book sources.

However, in Nolan’s version there is still a sizable, unspecified gap between the moment that Bruce the young kid watches his parents murdered and Bruce the angry college student enters a court room with a loaded revolver hidden in his sleeve, planning to murder the criminal standing trial for the death of his parents.  Nolan had the wisdom to simply skip ahead in the story because a movie doesn’t have time to ponder what exactly Bruce’s life was like in the immediate aftermath of his childhood trauma nor does it need to overexert itself to depict the gradual deterioration of Gotham City and corruption of the Gotham City Police Department.  That’s the type of stuff best left explored in limited run comic books, flashback episodes of various animated Batman shows, or perhaps never pondered at all.

Yet here’s Gotham, featuring James Gordon (Ben McKenzie), his boss (Zabryna Guevera) and fiance (Erin Richards), Harvey Bullock (Donal Logue), Alfred (Sean Pertwee), Penguin (Robin Lord Taylor), the Penguin’s boss (Jada Pinkett Smith), and very young versions of Selina “Catwoman” Kyle (Camren Bicondova) and Bruce Wayne (David Mazouz).  It’s challenging us to care about Bruce Wayne as a little kid and Jim Gordon as an almost dangerously idealistic young cop.  It’s attempting to answer the new Point B of the Batman story, which is “Yeah, but what was Bruce like as a kid?  And how exactly did Gordon overcome the corruption around him?”, just hoping that that’s actually a question anyone’s asking.  It’s the kind of thing you end up having to do with a character who’s been around in the comics for 75 years, and has been in some of the biggest films of all time ever since Tim Burton’s Batman in 1989.   You have to find some kind of new angle on the material.  2016’s Batman v. Superman: Dawn of Justice is going to give us a far older, more seasoned Batman than we’ve ever seen before on film, inspired again by Frank Miller’s work (this time The Dark Knight Returns); Gotham is giving us a young Bruce Wayne we usually only see in flashbacks. 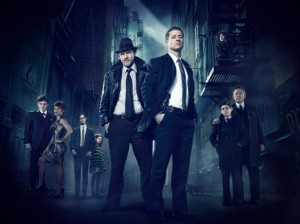 It remains to be seen how well any of this is going to work out, but Gotham got here first, premiering its pilot last night to strong overnight ratings.  As far as pilots go, it was better than most, impressive in just how much it crammed into its running time:

In fact, Bruce Wayne was but a minor player in the whole affair, just some rich kid to whom a young cop made a promise to find his parents’ killer(s).  You could argue that if he wasn’t Bruce Wayne and this wasn’t Gotham City this show would just be a cop procedural about a young detective pledging to take on the system despite an uneasy relationship with his new partner.

From that angle, it’s not really all that different from CBS’ short-lived cop show Golden Boy, which was also about a young detective the audience knew would someday become the Police Commissioner since the entire show was told in flashback from 7 years in the future when the lead character had become Commissioner.  Except Golden Boy didn’t have massive CGI work done to help its city look slightly more comic book-y, not as extreme as Tim Burton’s Gotham but not as grounded as Nolan’s, and Golden Boy didn’t have Jada Pinkett Smith around chewing up the scenery as a club-owner, mob enforcer named Fish Mooney.  Plus, Golden Boy wasn’t nearly as obsessed with the “one man against the corrupt world” angle that Gotham is running with.

The problem for me is I don’t really like cop shows.  I never have.  Classics like NYPD Blue, Law & Order, and The Shield purposefully remain in my blind spot, and the only real cop shows I’ve ever watched and enjoyed are either entirely comedic (Brooklyn Nine-Nine) or remarkably offbeat (Due South).  The internal and external drama of society’s trusted boys in blue fighting to serve and protect is not something which resonates with me (the same goes for most lawyer or doctor procedurals), and when I watch someone like Gotham’s Harvey Bullock (Donal Logue) compare their plight to being soldier’s at war I invariably roll my eyes a little.

To be fair, Gotham does not appear as if it will be an overly rigid cop procedural since the pilot alone finds time to explore Gordon’s live away from work, and they have set up multiple serial story arcs which will carry over throughout the entire season, such as who killed Bruce’s parents, how will the mob war shake out, what will become of Renee Montoya’s investigation of Gordon, when will Penguin rise to power, etc.  However, much of its primary drama seems inherent to the cop genre, right down to the miss-paired partners, one a straight-laced idealist and the other a corrupted but redeemable realist.  This is likely because part of the inspiration for the show is the fondly remembered comic series Gotham Central, which focused on the ordinary cops of Gotham City with only occasional appearances from Batman, Commissioner Gordon, and costumed supervillains.  However, it sort of feels like Gotham was too nervous to do that because look at how much Agents of SHIELD struggled with a similar set-up, and now we have a cop show co-existing alongside a Bruce Wayne origin series.  It’s an uneasy combination which could ultimately undermine the show, but it actually worked really well in the pilot.

If I’m honest, if Gotham had no connection to Batman I never would have watched this pilot because there are simply too many new and returning shows on TV and streaming right now to waste my time on a genre (cop show) I have historically disliked.  However, they screamed Batman, and I came running, far more impressed with what I saw here than I was from something like Agents of SHIELD’s pilot last year.  Some of the choices they made are odd, e.g., most of the characters start out in the middle instead of the true beginning of their characters arcs from the comics, and Gordon was overshadowed by the villains.  Plus, some of the musical cues were awkward, but everything hung together better than most pilots, leaving me with a clear idea as to the major storylines going forward.  Of course, I watch the trailer for next week’s episode, and see yet more of the expected bickering between Gordon and Bullock, which I couldn’t really care less about because after the first episode the actual breakout characters are the villains, Fish Mooney and The Penguin.  Batman is renowned for having the absolute best rogues gallery in all of comics, and Warner Bros. is letting Gotham use pretty much any of them they want.  I came for Batman, I stayed for the cops, but, trust me, I will be back for those villains.  I just don’t know how long I’m going to stay.

1. While they were walking down the alley, I kept waiting for Thomas, Martha, or Bruce to say that the movie they had just come from was Mark of Zorro (if you know your Batman comics you know why).

2. When Gordon and Bullock were hanging upside down together in the meat locker, about to be filleted by heavy metal music-black mask guy, I had a brief expectation that Batman would show up and save them. It’s Gotham City and Gordon and Bullock are in trouble; I’m used to Batman saving the day in that scenario in the comics and various animated shows.

3. I didn’t have a problem with the one-too many gratuitous cameos from the likes of Poison Ivy and The Riddler, but that’s mostly because I’ve seen the producers assure critics that normal episodes won’t be so jam-packed with cameos. They just wanted to throw the cameos into the pilot to get our attention. 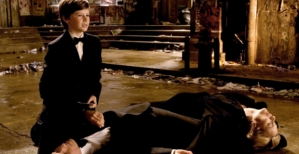 4.This is actually the fourth time we’ve seen those Martha and Thomas Wayne killed in live-action with the previous three depictions occurring as flashbacks in the 1989 Batman, Batman Forever, and Batman Begins not to mention the various times it’s been depicted in the animated realm, including Batman: The Animated Series, The Batman, and Batman: The Brave & The Bold. Gotham’s version offered very little in the way of new material to the scenario other than the fact that this is far and away the loudest and highest-pitched scream Bruce has ever delivered while crumbled on the ground next to his dead parents’ bodies

5. Gotham is not the first version of Alfred to be a disciplinarian-loving bad-ass before. He’s depicted in almost the exact same way in the graphic novel Batman: Earth One, and in the current animated series Beware the Batman.

6. You could do a drinking game to the number of times the name “Jim Gordon” is said in full in this episode.