Those are just some of the notes I jotted down while watching the series premiere of iZombie, the CW’s adaptation of Chris Roberson and Michael Allred’s DC-Vertigo comic book. The show centers on Liv, a medical student-turned-zombie who takes a job in the Coroner’s Office in order to gain access to the brains she must reluctantly eat to avoid becoming a non-thinking, violent George Romero-esque member of the living dead. With every brain she eats, she inherits the corpse’s memories, motivating her to help solve homicide cases along with her medical examiner boss and a police detective who is told Liv is some kind of psychic. In the pilot, the Jane Doe of the week turns out to have been a high priced callgirl who speaks Romanian and suffers from kleptomania, both habits Liv takes on while working the case. 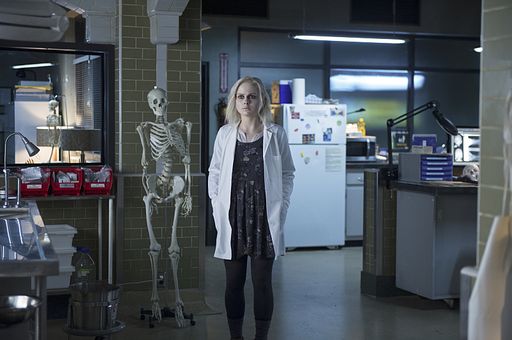 The network clearly wants this to be a hit, giving it Supernatural’s old timeslot so that it can enjoy a cushy lead-in audience from The Flash. The show’s creator, Rob Thomas, has been giving interviews all over the place to promote it. And this is another Unbreakable Kimmy Schmidt situation. There, Tina Fey and Robert Carlock simply couldn’t stop themselves from making something freakishly similar though no less enjoyable than what they’re known for, 30 Rock.  Here, Thomas and his assorted producers, all of whom worked on Veronica Mars, have arguably taken the character of Veronica, renamed her Liv, and dropped her into a supernatural world. In Veronica Mars, the traumatic event which changed the course of her life was the death of her best friend; in iZombie, it’s being scratched by someone during an apparent freak attack at a boat party and waking up the next morning an honest-to-goodness, brain-craving zombie. They both exist as social outcasts, display an endearingly wry sense of humor, and narrate their respective shows, sometimes sounding like a film noir character, other times coming off as a girl reading from a particularly articulate diary entry. Of course, it’s maybe a bit of a stretch to suggest the characters are more or less identical. They’re probably better characterized as close sisters, Veronica the bad-ass go-getter, Liv the younger, less self-assured sister trailing behind her.

But that’s what Rob Thomas was asked to do. He didn’t initially want to, telling Rolling Stone, “[Warner Bros. development head] Susan Rovner just would not take no for an answer. Her pitch was essentially, ‘Look at the cover of this comic book. That is the next great female lead on the CW, and you need to make her the next Buffy, the next Veronica Mars.’ I kept trying to say no and she kept refusing to listen to me until finally I gave in. And I’m really happy that I did.” It’s important to remember that although the gap has narrowed in recent years, the CW still skews primarily female, with only 40% of its viewing audience being male. So, they need their female-led shows like Reign, Jane the Virgin, Hart of Dixie, and now iZombie.

The problem is that Veronica Mars was not perfect and many of its flaws have been transferred to iZombie, particularly in the sprawling cast category. Obviously, most of the characters are going to get sidelined in the pilot, but between Liv’s type-A sister, condescending mother, largely silent brother, gorgeous but bland dreamboat of an ex-fiance, oddly enthusiastic boss, forever annoyed cop partner, and mysterious maker you get the sense that some of those people are going to end up in storylines we won’t really care about. Moreover, even with its brilliant, ultra-catchy theme song, Veronica’s usage of songs in certain episodes could be overbearing and distracting, and the plaintiff pop tune which flared up when Liv sought to re-connect with her ex-fiance in the iZombie pilot was especially melodramatic, even for a CW show. Veronica played into the film noir aesthetic, the occasional use of shadows, lots of nighttime scenes, but often times I didn’t find it to be a particularly interesting show to look at (I sense many will disagree with me about that). Similarly, beyond its frequent but brief comic book panels, and the eye-popping sight of Liv’s pale skin, iZombie doesn’t appear to have a particularly compelling visual flair either, although the clever, fun, Edgar Wright-esque editing makes up for that.

Of course, if you’ve never seen Veronica Mars then the real problem with iZombie at this point is mostly that it is just a police procedural with a supernatural twist, and you get the sense that they’re not as interested in the supernatural part as you’d expect, apparently briefly granting Liv superstrength whenever she gets really mad and goes full-on zombie (This Hulk-like transformation was going to be referenced by having her say “Zombie Smash!” at one point, but the network made them take it out). The source comic book is far more irreverent and detached from formula, with its lead character Gwen hanging out with ghosts and were-terriers, working as a gravedigger, and using her ability to take on people’s memories to both solve crimes as well as act out last wish fulfillment. Thomas admits, “It’s a weird bit of personal taste on my part, but I have trouble with the supernatural. Which is a funny thing to say, because I have no problem believing zombies that are caused by virus outbreak. I’m a huge 28 Days Later fan.” More than just a matter of taste, Thomas also told The Hollywood Reporter the show’s premise needed to be simplified, “Jimmy Fallon made a joke about how many premises are in our pilot: med student who turns into a zombie, inherits memories and solves cases. Then you add werewolves and mummies and ghosts? That’s a bridge too far for me.”

I don’t blame him. The CW already has plenty of supernatural content to enjoy, be it the vampires, werewolves, and witches of The Originals and Vampire Diaries, and all of that and the kitchen sink in Supernatural. iZombie is coming at this from more of a Romero-esque, metaphorical angle. There is plenty of lip service about a 28 Days Later scientific explanation, but this is really more of a Dead Like Me scenario for the recession generation. In Dead Like Me, it took dying and becoming a reaper for an underachiever like George (Ellen Muth) to truly start living whereas in iZombie Liv functions as a stand-in for the countless many around the world who have worked their tails off to get the right degrees, accreditation, and training only to discover that the life they wanted has been rendered impossibly by a cruel, turbulent economy. The central lesson Liv learns over the course of the pilot is to not view herself as a victim, but instead start doing the right thing and helping people, clinging to a hope that her friend the Medical Examiner might be able to cure her if such a thing is even possible. That she gets to tell us this with a voiceover while we watch her playfully scare little kids while dressed up as an exaggerated zombie for a Children’s Hospital’s Halloween gathering makes it all the more charming. It’s not perfect, perhaps a little obvious, but definitely charming.

That about sums up the entire show at this point. If Veronica Mars is any indication, things won’t start to get really good until we get further into the season-long mystery.

1. Should I be worried that I was never grossed out by watching Liv eat brains?

2. The medical examiner (Rahul Kohli’s Dr. Chakrabarti) and police detective (Malcolm Goodwin’s Clive Bainaux) were the most prominent characters beyond Liv in the pilot. Although I like them, they both have their eccentricities which I can’t quite get a handle on yet. Clive’s line about wanting to call his partnership with Liv “Cagney & Pasty” did make me laught out loud.

3. The iZombie comics and graphic novels are on sale on ComiXology and the Amazon Kindle right now. I downloaded the first graphic novel last night, and thus far it’s kind of awesome.

Collider: They saw the first 4 episodes, and gave the show a collective two star rating: “Though iZombie juxtaposes its light tone with occasional blasts of brutal violence and ripe cadavers, it doesn’t play with that dichotomy enough. The cast is good and occasionally funny (particularly Kohli, who is the standout), and the storylines are comfortably familiar (fans of crime shows should, through most of the episodes, be able to guess the outcomes before they happen), iZombie can’t seem to quite raise the material to anything livelier. For those who are curious, but not ready to devour the oddball procedural immediately, it may be better to wait until Blaine’s story adds a meatier second course. Or simply look for a fix elsewhere.”

ScreenCrush: “Ninety percent of these episodes are standalone cases that involve Moore’s particular tastes leading her to gain insight into the mystery of the week. How that insight happens, and the side effects of that insight, are best left up to the viewer to discover. It opens up a surprisingly wide palette for the show to explore, but ultimately might kneecap the show over the long term. But for now, it’s clear The CW has another great property on its hands, one that might not have the immediate quality of Jane The Virgin or the current potency of The 100. Still, this is a network that knows what it’s doing, and this is another solid hour-long well worth your time.”