Arrow threw all of us for a loop at the end of its season 3 premiere when a mystery shooter pumped Sara Lance full of arrows and sent her lifeless body off the edge of a roof.  It set up the big mystery of the season: who shot Sara Lance?  However, much like the “Who Shot JR” and “Who Shot Mr. Burns” mysteries preceding it in TV history the answer was fairly disappointing.  Brainwashed Thea?  Really?  That’s the best you’ve got.

Maybe the show has learned its lesson because at the end of last night’s season 4 premiere (read my review here) we weren’t stunned to see a beloved character die.  Instead, we were stunned to see Oliver Queen and Barry Allen standing over a grave and pledging vengeance, possibly against Damien Darhk, the new season’s big bad, possibly against someone else.  Well, Oliver pledged vengeance.  Barry mostly looked sad, listened to Oliver and rushed back to Central City, clearly biting his tongue and deciding against offering to travel back in time and set things right

They’ve again opened a season with a mystery, but now it’s a more straight-forward “Who dies?” kind of thing, which should be more manageable

Speaking to reporters after the premiere, producers Marc Guggenheim and Wendy Mericle promised that whoever is in that grave is most definitely dead.  Moreover, Mericle observed, “They will stay dead. We want to bring stakes back to the show. We don’t necessarily know who it is right now. We’re still planning out the whole season, but we want it, obviously, to have resonance, and if it doesn’t mean anything to the characters, it won’t to the audience either.”

This now gives the rest of the season an air of tragedy. We are being set up for Oliver’s triumphant birth as the bonafide hero Green Arrow as opposed to cold-blooded vigilante Arrow, and all of his consternation about it is offset by the guiding hand of love that Felicity has brought into is life. However, we know that he royally screws up and someone ends up dead, and the smiling, slightly higher-pitched version of Oliver we saw in “Green Arrow” will at some point transition back to the stern killer of old.

That, my friends, is damn intriguing. Who dies and how? Whoever it is, their death causes Oliver to shed a single tear:

And inspires Barry Allen to take time away from his own crime-fighting to pay his respects: 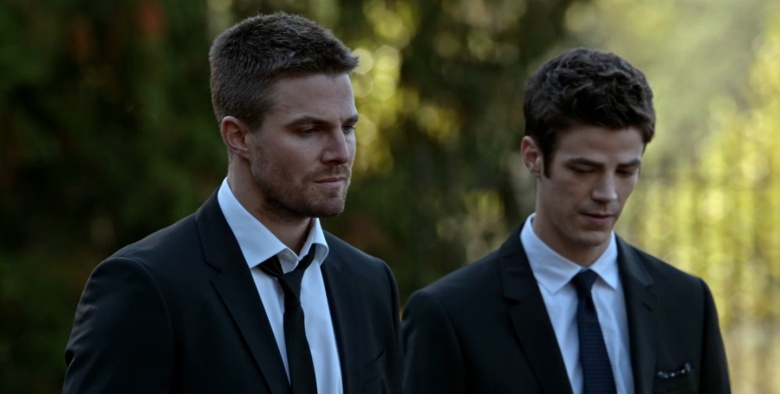 Who could it be?  Let’s look at the candidates:

Yeah, it’s not her. The mid-season premiere revealed that in the flash-forward to the grave she’s alive and grieving, more than encouraging Oliver to go kill whoever it is who brought such tragedy to their lives. That means whoever is in that grave has to be someone Oliver, Felicity AND Barry would grieve, which complicates things. Could it be Felicity’s mom? Maybe, but why would Barry show up for that? Maybe to pay his respects to Felicity which he doesn’t even get to do since he only has that quick chat with Oliver before jetting back home.

Why It Could Be Her: We already know that she’s unstable due to the Lazarus Pit and that Oliver is concerned.  He’s not standing in her way, though, and the guilt he would feel over that if she dies in the line of duty would be devastating.

Why It Probably Isn’t: Because we’ve more or less already seen her die once.  Killing her again, albeit for good, wouldn’t necessarily be as effective anymore.  Plus, who would run that nightclub?  Thea still does that, right?  Seriously, though, would Arrow really kill Oliver’s only remaining family member?

Why It Could Be Her: She might be the most expendable.  With Sara coming back to life for the purpose of being spun-off to Legends of Tomorrow, we will soon effectively have two different versions of Black Canary in this little universe, even though Sara will change her superhero name and costume.  Beyond that, Laurel no longer seems all that important to the narrative of the show.  Felicity has replaced her as the love interest, at least for now, and the days of Oliver needing to rendezvous with a young lawyer on roofs to gather intel about crimes are long gone.  Laurel could end up a casualty of war as a result of her father’s deal with Damien Darhk.  The moment in “Green Arrow” where one of Damien’s goons almost got the drop on her at the police precinct could have been foreshadowing to a time when someone won’t be there to push the shooter out of the way at the last second.

Why It Probably Isn’t:  A lot can change in 6 months, and while Laurel might seem expendable right now she could become immensely important throughout the season, especially since she’s likely going to become Star City’s District Attorney.  Plus, there is the comic book history to honor.  Laurel Lance is a massively important character in Green Arrow comics.  You’d think twice before killing her off the show.  Also, at least as of right now would her dying be something Barry Allen would particularly care about?

Why It Could Be Him: He’s working with Damien Darhk, and that can’t end well.  Beyond any story reasons, there’s also the practical reality that older adult characters on CW genre shows are the most likely to be killed off the longer the shows run.  Vampire Diaries is a prime example of that.  The reason is simply that the network skews younger, and from a storytelling standpoint eventually all the paternal presences need to go away to allow the main characters to mature into adulthood, although I don’t know how paternal Quentin really is to anyone beyond Laurel. Plus, Felicity wasn’t the only one who mentioned “the darkness” in “Green Arrow.”  That also came from Quentin meaning Oliver’s dialogue at the grave could just as well be referencing Quentin.  Given how much blame Quentin already lays at Oliver’s feet, his death would seem all the more dramatic, and introduce some new drama for both Laurel and Sara.

Why It Probably Isn’t: They will have to do a lot more with Quentin this season to make us believe that Oliver would cry over his grave, and that Barry Allen would want to be there to say goodbye. Plus, come on – he’s this show’s Commissioner Gordon.

Why It Could Be Him: It would just be so dang tragic.  He has a wife and daughter, and he will likely spend a good chunk of the season mending fences with Oliver.  Imagine if they finally get back to being brothers again only for Diggle to get bumped off.  His quest to avenge his brother’s death could ultimately widow his wife and leave his daughter without a father.

Why It Probably Isn’t: Would they really kill Diggle?

Why It Could Be Her: She’s only a side character, but she’s connected enough to the main characters that her death would be deeply felt by all, even if only because they would mourn because their friend Diggle would be in mourning.

Why It Probably Isn’t: Why would Barry be at her grave?

7) Someone We Haven’t Met Yet

As ETOnline observed, “What about a new character we have yet to meet, like Felicity’s new employee Curtis Holt, or political consultant Alex, or mayoral candidate Jessica Danforth?”  We don’t know enough about any of them to understand how Oliver would react to their death, but similar to Lyla they all seem like potential candidates for the practical reason that they’d be easier to write out of the show than one of the full-time characters.

Back-up Choices: Thea, Laurel or Someone We Haven’t Met Yet

What are your predictions?  Is there another candidate I failed to mention, like maybe Nyssa, Malcolm Merlyn or Felicity’s mom?  Well, there, I mentioned them just now.  Who do you think we’ll see in that grave this season?  And do you think we’re being misdirected here?  What if Damien Darhk isn’t the killer?  What if someone like Slade Wilson comes back as a big surprise? Head to the comments to share your thoughts.