In 2011, multiple friends asked me the same question, seeking out my opinion as a film fan: Is J.J. Abrams really the next Spielberg?  It was an understandable question.  His new movie at the time, Super 8, was produced by Spielberg, and it was purposefully made to look like a long lost Spielberg movie from the 80s.  However, my knee-jerk response was something along the lines of “Oh, hell no” followed by “Why can’t we just let J.J. Abrams be J.J. Abrams?”  My friends would answer, “Because J.J. Abrams doesn’t seem particularly interested in being J.J. Abrams.”  In truth, I meant why must we compare one director to another, but Abrams invites such comparisons upon himself.  He’s known for lens flares and mystery box narratives (The Force Awakens has the latter, not the former), but also for scenes which will broadly recall other movies in a way that toes the line between homage and theft (although don’t all great filmmakers steal from the other greats?).

With The Force Awakens, Abrams has again pulled off an insanely entertaining act of cinematic imitation, delivering a movie which feels like something made by George Lucas or one of his hired guns on the sequels in the original trilogy.  Some have despaired that for as entertaining as the movie is, it doesn’t actually break new ground for the franchise, remembering that even with their many, many faults the prequels were at least trying to do something new.  Some say screw that noise.  For the first time since 1983, we got something which undeniably feels like a Star Wars movie!  Other, far more general fans may simply be wondering who J.J. Abrams is, e.g., What are some of the other things he’s done?

That last part is difficult to answer because Abrams is that new breed of Hollywood heavyweight who pretty much does everything [see also: Joss Whedon, Guillermo del Toro].  He’s created, written and directed multiple TV shows (Felicity, Alias, Lost) and produced countless others (e.g., Almost Human, Fringe).  He’s also written books and produced movies he didn’t direct (Cloverfield).  Way back in the day, he wrote the script for Regarding Henry.  Counting Force Awakens, he’s now directed five movies, and now that he’s fixed the Star Wars  film franchise he’ll recede to the background and let other people direct the sequels as he produces from afar.

He’s wanted to make a Star Wars movie for as long as he’s been interested in making movie.  As such, The Force Awakens is Abrams living out his childhood dream, and in so many ways it is the culmination of his directing career.  Buzzfeed recently got him to open up about each one of his movies: 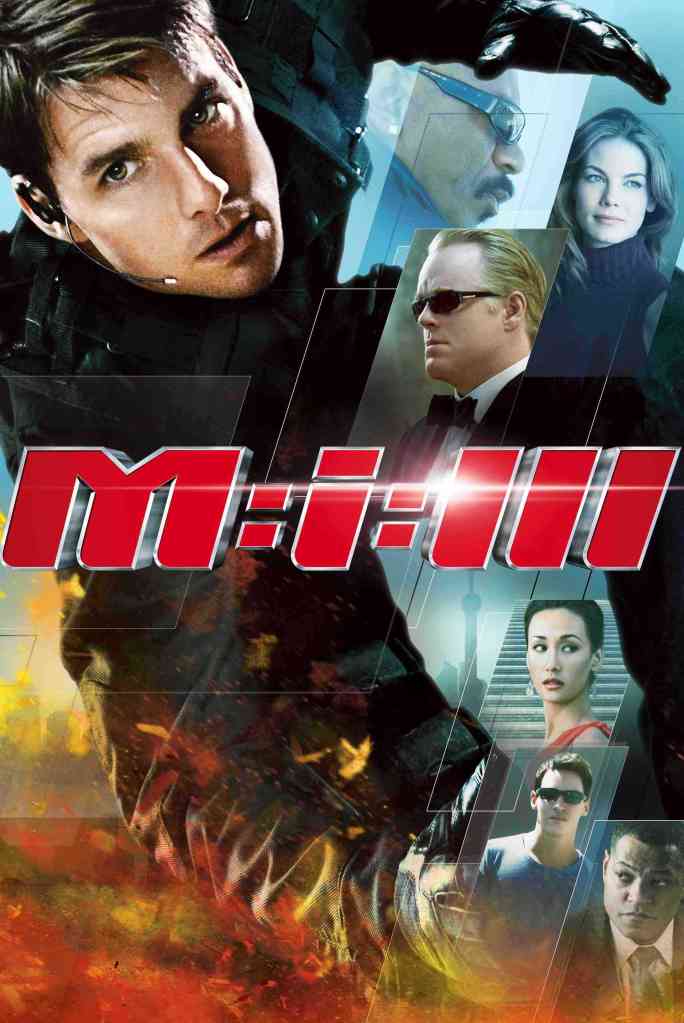 Aka: The One With Philip Seymour Hoffman as the Bad Guy

Aka 2: The One Where Ethan Hunt Gets a Wife

“I was so excited,” Abrams said. But when he read the existing script, he realized, “I just could never have directed it — it just wasn’t something I would have known how to do. I pitched the idea of getting to know who Ethan Hunt was when he wasn’t the superstar spy,” Abrams said. “What is he like as a man? What is he like when he’s home?”

“The learning curve was significant in some ways because it was the first movie I ever did, and it was a lot to learn quickly,” Abrams said. “But it was also learning with some of the best in the business, and someone, in Tom Cruise, who is just such a driven and knowledgeable force of nature.

“It was one of those amazing opportunities to see that on a scale that wasn’t just your group of friends with a camera that you were renting, but rather a pro, triple-A, amazing crew being open to trying things and figuring out how to make it work,” he said. “It ended up being as challenging as any other sequence, but one of the most fun sequences to work on in the movie.”

It was both “hugely different” and “the same exact thing” from what he was used to. “It doesn’t matter if you’re shooting on the banks of the river in Rome across from the Vatican or if you’re shooting in your parents’ bedroom. It’s always: What are we doing here? What is the story?” he said. “It was wildly, like, old-pair-of-shoes familiar.”

Aka: The One That Turned Star Trek Into an Action Film Franchise

Aka 2: The One With All the Lens Flare

Aka 3: The One Where Spock Got His Groove Back

Aka 4: The Movie Abrams Only Made Because He Really Wanted to Make Star Wars & Figured This Was Close Enough

“It was definitely an education in scale,” he said. “When you’re doing a space adventure and you do an establishing shot, it needs to be a planet — it’s not just a building.”

That meant, of course, also following in Roddenberry’s revolutionary footsteps in the cast’s diversity. “It was important to me, in that I very much appreciated what Roddenberry was doing in 1966, in a time when it was not common to have a multicultural, multiethnic cast — and having women in positions of authority and power,” Abrams said. “Working on a movie like Star Trek, you learn how important those choices were to people who saw themselves in those shows in ways that they hadn’t before. So it was something we were thrilled to get to continue.”

Aka: The One With That Awesome Train Crash Sequence

“I wanted to tell a story that felt like an Amblin movie,” said Abrams, citing Spielberg’s production company that had made E.T. the Extra-Terrestrial, The Goonies, and Back to the Future, among many others. Getting Spielberg on board was not difficult, Abrams said: “I called Steven Spielberg and said, ‘Would you want to do a movie called Super 8 about kids making movies?’ And he said yes. Because he had done the same thing when he was a kid.”

“I felt somehow that I never quite solved how to reconcile the supernatural genre element with the human drama/comedy element.”

“Certain things worked; certain scenes were good; certain relationships I was really happy with. But ultimately, I couldn’t look anyone in the eye and say, ‘The script is great,’” he said. “It wasn’t that there was anything that I felt overtly didn’t work, but I wish I had better integrated this alien/monster/sci-fi story with the emotional, sort of comedic story of these kids and what they were going through. It just felt like the last third of the movie didn’t have the sense of inevitability that I wish it did.”

Abrams, who may be his own worst critic, concluded by saying: “You know, you work as hard as you can to try to fix it as you’re going, but I didn’t feel like I was going in having nailed it.”

Aka: The Wrath of Spock

Aka 2: The One That Made Loads of Money But Went Over So Poorly the Abrams-less Sequel Is Pretty Much Ignoring It

“I take full responsibility for this — I was encouraging the writers in certain directions, and we were working on the script and putting it together,” Abrams said. “But by the time we started shooting, and this was literally at the very beginning of the shoot, there were certain things I was unsure of.”

“Any movie, any story has a fundamental conversation happening during it,” he continued. “There’s a fundamental argument; there’s a central question. And I didn’t have it.”

“It was a little bit lightweight, ultimately, that Kirk was disappointed that Spock didn’t feel that their friendship was as meaningful to him as it did to Kirk, which is sort of what we’re saying,” Abrams said. “And that Spock’s arc is coming to unabashedly love his friend Kirk.”

“At the end of the day, while I agree with Damon Lindelof that withholding the Khan thing ended up seeming like we were lying to people, I was trying to preserve the fun for the audience, and not just tell them something that the characters don’t learn for 45 minutes into the movie, so the audience wouldn’t be so ahead of it.”

“I felt like, in a weird way, it was a little bit of a collection of scenes that were written by my friends — brilliantly talented writers — who I somehow misled in trying to do certain things. And yet, I found myself frustrated by my choices, and unable to hang my hat on an undeniable thread of the main story,” Abrams said. “So then I found myself on that movie basically tap-dancing as well as I could to try and make the sequences as entertaining as possible. Thank god I had the cast that we have, who are so unbelievably fun to watch. And an incredible new villain in Benedict Cumberbatch.”

“I would never say that I don’t think that the movie ended up working,” Abrams said. “But I feel like it didn’t work as well as it could have had I made some better decisions before we started shooting.”

Aka: OMG SO GOOD

Aka 3: The Search for Luke

“Working with John Williams was the chance to work with an absolute idol,” Abrams said. “And maybe the greatest film composer in the history of cinema. That was something that was as exciting as any other aspect of doing this film.”

“The burden that is on the shoulders of the younger actors in this movie is enormous: They’re stepping into a world and a spotlight, and need to shoulder not just the story in this film, but the story of what is the beginning of a new trilogy,” Abrams said.

He said he thought about the brilliance in the casting of the Harry Potter movies as he began the process. “Oh my god — they cast these kids, and you look at how young they are, and you realize they just remain those characters for I think what was, like, 37 movies. They grew up — and it is a massive leap of faith,” Abrams said. “Bringing them to life was a huge opportunity, but also an enormous risk and burden. Are we casting the right person? What happens if Hermione is wrong, or what happens if Ron isn’t quite right?”

“So we needed to bring actors in who people could very quickly connect with, relate to, and sort of fall in love with.”

We wrote these characters trying best as we could to tell a story that we would hope people would embrace,” Abrams continued. “As the story we tell is hugely important, it’s also incredibly important that people see themselves in those stories. It was something that definitely was on my mind. It’s 2016 almost — it feels like what you need to do, what I’m compelled to do. It feels right.”

“I want people to feel that this is an inclusive world,” he said. “Because that’s what I felt when I saw Star Wars originally. The Force binds all living things together —not just white dudes.”

We’re just making a movie,” he said. “And the noise in the case of Force Awakens, expectations for it being the best Star Wars movie ever, or it’s going to make $600 million in the first weekend — all those things are wonderful that people care enough to want to see it. And also soul-crushing.”