In anticipation of The X-Files’ new season, we’re looking back and celebrating our favorite episodes. This is the list of the top 10 standalone episodes.  Head here for the list of top 10 mythology episodes.

The X-Files’ mythology episodes are great, sure, but forget about that for a bit because the show’s standalone entries, best summarized as “This has nothing to do with anything else going on, and we’ll probably never even mention this again,” are just as much fun. The standalones demonstrate how pliable the show’s central premise really was. Episodes could be tragic, horrific, comedic, or some combination of all of the above. There were almost no limits to as to what narratives could be attempted under the X-Files banner. Subsequent shows like Fringe and Supernatural borrowed rather liberally from that formula, but there’s no beating the original.

An episode from the always reliable Vince Gilligan, “Pusher” presents an all-too-human monster, Robert Patrick Modell. He has the ability to exert his will onto whoever he chooses (sound familiar, Jessica Jones fans?). Of course, Mulder naturally suspects what Modell is capable of, and finds himself in Modell’s path as a result. The Russian Roulette climax is a flawless bit of tension-building.

Okay, this is basically The X-Files‘ version of The Thing,  but if you’re going to steal, steal from the best.  This was an early indicator of how strong the series could really be. Stranded at a lab in the Artic, investigating why a crew killed each other, Mulder, Scully, and a group of researchers find themselves victim to a threat that takes over its host and causes psychotic rage. It may seem like a cheap ploy when it attempts to convince the viewer that Mulder may in fact be infected, but it’s an effective exercise in claustrophobic paranoia and shows how, even in the early goings, Scully and Mulder have a built-in trust in one another. 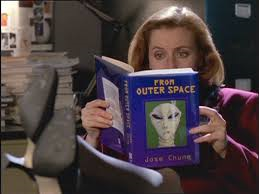 One of the show’s early “funny” episodes revolving around alien abductions that may or may not have happened, as well as the nature of fiction and narrative, “Jose Chung’s…” was one of the earliest episodes that showed how far The X-Files could stretch without breaking. It’s a wry examination of The X-Files that examined the show’s quest for the truth and undercut such a quest by demonstrating how subjective truths can be.  “Jose Chung’s…” tried to tell viewers that maybe it wasn’t the answers that counted, but how you moved on with your life that really mattered. 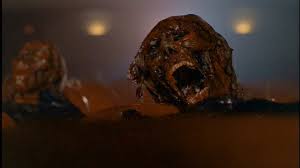 Season 5 has some brilliant episodes, but “Pine Bluff Variant” is frequently forgotten when the show’s best is discussed, which is a shame. Mulder is forced to infiltrate an anti-government militia group, and it’s not too difficult to see that these guys, with their extreme government animosity and paranoia, possibly represent Mulder’s future. Mulder would be just another conspiracy nut, except the show has proven he’s probably right most of the time, and it’s not paranoia if it’s true. As much as this is Mulder undercover, it’s hard not to see the “real” Mulder underneath the façade he presents when he’s undercover, and the line between the two can’t help but feel blurry. Plus, a reveal at a movie theatre is one of the most quietly horrifying moments the show ever attempted.

There are probably better episodes of The X-Files, but there may be none as effortlessly entertaining as “Small Potatoes.” Granted, there’s a sleazy subtext as to what this guy (who always seems like a pretty minor threat) is actually doing, but it really works for the way it explores the Mulder and Scully dynamic, specifically how close they are. Much of the humor stems from how an outsider would perceive Mulder, a good looking guy with a gorgeous partner, but no social life and a terrible apartment, and the perceived disconnect between those two realities.

Featuring a brilliant turn by go-to creepy guy Brad Dourif, “Beyond the Sea” is one of the earliest episodes that forces Scully to confront something she can’t scientifically explain. Following the death of her father, she finds herself falling under the influence of Dourif’s supposedly psychic serial killer. There’s a definite Silence of the Lambs vibe to the proceedings, but Dourif and Anderson elevate material that could feel derivative. There are multiple jokes to be made about Scully’s role as the skeptic, but looking back on the show as a whole, the jokes ultimately miss the point. She has her beliefs, just as Mulder has his, and both are defined equally by those beliefs. 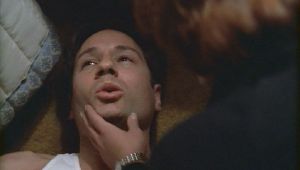 The episode opens with one of the most horrifying scenarios imaginable: Mulder stakes a guy he believes to be a vampire. He shows Scully the guy’s fangs, she touches them, and they reveal themselves to be fake when they come off in her hand. What follows, however, is one of the series’ funniest episodes, with Scully giving her version of events and Mulder giving his version. What makes the episode work is the way in which it explores how Mulder and Scully perceive one another and themselves. In Scully’s version, she’s the calm, patient partner to a way too enthusiastic nut. In Mulder’s recounting,  she’s the perpetually scowling taskmaster and he’s the polite, soft spoken submissive. It’s one of the best episodes the series ever did.

I’ve written about my love of this episode before, and it sort of straddles the line between mythology and standalone.  I think it ultimately is a standalone episode because there’s nothing new revealed about any vast government conspiracy. It just reexamines one of the reasons Mulder is so doggedly determined to find the truth by casting doubt upon that belief by implying maybe Mulder’s sister wasn’t abducted by aliens but was in fact just murdered by an all-too-human monster. As an audience, it’s unlikely anyone actually thought the show would unring that particular bell, but the episode works because of how much the idea Mulder’s been wrong all these years shatters him. He has to accept the fact he could have built his whole life and belief structure on a misremembered lie, and Duchovny plays his desperation and vulnerability to the fullest, making his anguish both palpable and pitiable.

“Home” is an episode that feels uniquely X-Files. It’s’ set in a small town, its world is populated with colorful characters, both quirky and horrific, and its set in a time before the internet connected everyone to everyone else. It’s a rumination on the outside world sneaking into a town that’s avoided its influence for so many years, and its theme is echoed both in the Sheriff’s lamenting speech as well as the inbred Peacock clan’s urge to preserve their own ways of life. For an episode so widely remembered as being one of the most horrifying episodes the series ever put on the air, it’s remarkable how much humor is lurking around its fringes, from Sheriff Andy and Deputy Barney to Mulder’s mock horror when he finds an old newspaper with the Elvis’s death as a headline.  It’s amazing an episode as unsettling as this one is can inject jokes and not lose its edge.  When something is as horrifying as “Home” any laughs are welcome.

This is one of the saddest and loveliest episodes the series ever attempted. It’s main plot centers upon a man murdering psychics, but what it’s really about is the tragedy a clairvoyant ability would bestow upon the psychic. Clyde Bruckman’s ability to see how everyone will die is presented as a truly haunted, tragic bit of circumstance. There’s humor here, but only enough to keep the episode from tipping fully into bleak, pessimistic angst. In the end, it’s an episode about how lonely and unbearable life can feel, whether your trying to make sense of the world or trying to cope with the knowledge that the world already makes a perfect, dreadful sense. In the end, we’re all doomed to die. What matters is, will there be someone to grieve our passing?

The X-Files is available to stream on Netflix, Hulu, and Amazon Prime. Plus, it just came out on Blu-ray.

Are there other episodes you think we should have included? Some we should have excised? Let us know in the comments!  And remember to check out our list of top 10 mythology episodes.