The Oscar nominations are going to be announced tomorrow morning, at which point we can debate about who we want to ultimately win.  Until then, here’s who I think will be nominated, at least in the major categories (Picture, Director, Actor/Actress, Supporting Actor/Actress, Original Screenplay, Adapted Screenplay).

Remember that these nominees are decided upon by 6,291 eligible voters who are only allowed to vote within their own branch of the Academy (actors vote for actors, directors for directors, etc.). For predictive purposes, the only outside awards entities which actually matter are the four major guilds (Producers, Writers, Actors, Directors) because there is considerable overlap between their voting bodies and the Academy. Any other awards shows simply serve to elevate the profiles of potential nominees. Look to the guilds to see how the people who matter (as far as the Oscars are concerned) have actually been voting.

That’s what I did…and then I kept ignoring that and nominating Brooklyn because I love it. Sue me.

To save you some time, my big surprise picks are:

I am really, really tempted to predict that Anomalisa will show up in more categories than anyone is expecting, but I am erring on the side of “That movie’s probably too weird for the Academy” to be that bold. 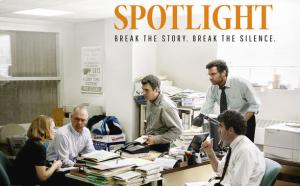 Why: Because they were both already snubbed by the PGA and DGA (as well as by SAG for Room), and while everyone seems to think this year’s wide-open Oscar race means we’ll get 10 nominations the math actually indicates just the opposite. IndieWire’s Tom Brueggemann broke it down last week, explaining, “The fact is, with more titles competing for the same, finite number of votes, it will be more difficult for the eight or nine films of recent years to reach 5% [of number #1 votes required for nomination]. The exact number will depend on just how divided the voters are on their #1 and #2 choices, but this year’s math—and its unpredictable twists and turns to date— point in a clear direction: a shorter, not longer, list of Oscar suspects.”

In truth, the only definite locks appear to be Spotlight and The Big Short since they’ve been nominated by the the four big guilds. Straight Outta Compton and The Martian were nominated by three of the four guilds, and Bridge of Spies, Ex Machina, Mad Max: Fury Road, The Revenant, Sicario and Trumbo all went two for four.  So, I chose the most nominated films, and then cherry picked from there, ultimately going off a personal hunch in selecting Brooklyn over Ex Machina, Sicario and Trumbo.

Not Going to Happen, But Should: Creed, Inside Out

I went super boring with it, simply going with the DGA’s nominees. Plus, I let my personal boredom over Bridge of Spies dissuade me from selecting Spielberg as a surprise nomination.

Not Going to Happen, But Should: Ryan Coogler, Creed

If not for the Golden Globes, I probably would have predicted Johnny Depp for Black Mass since SAG liked him. However, watching Sorkin and Winslet win at the Golden Globes reminded that although practically no one actually went to see Steve Jobs those who did loved it (well, unless you were someone who worked for Apple).  Black Mass, on the other hand, feels like a thing no one even remembers anymore. So, torn between Fassbender, Depp and Damon I made Depp the odd man out.

Not Going to Happen, But Should: Michael B. Jordan in Creed, Ian McKellan, Mr. Holmes

The thing that could blow this whole thing up is whether or not the Academy ignores the Best Supporting Actress campaigning for Rooney Mara’s performance in Carol and decides that she is actually a co-lead with Blanchett, not a mere supporting player.

Not Going to Happen, But Should: Charlize Theron in Mad Max: Fury Road, Blythe Danner, I’ll See You In My Dreams

Logic dictates that Michael Shannon will be nominated for 99 Homes (as he was by SAG), and that despite the studio’s campaign for Best Supporting Actor the Academy could put Tremblay into the Best Actor category. Logic also dictates that Idris Elba should be in here for Beasts of No Nation.  At best, any potential spoiler to all of that would be Benicio Del Toro in Sicario or Mark Ruffalo in Spotlight. However, I am again going off of a hunch that Tom Hardy in The Revenant will be the nominee to come out of nowhere. If Alejandro Iñárritu can somehow get Emma Stone AND Edward Norton nominated in the supporting categories for Birdman.. surely we shouldn’t actually be that surprised if he does it again with Hardy for Revenant.

Not Going to Happen, But Should: Steve Carell, The Big Short

These are actually the SAG picks, and I’m sticking with them on the assumption that the Academy will give in to the studio campaigning that Mara and Vikander should qualify for Supporting even though they’re pretty much co-leads in their respective movies. I could easily bounce out Helen Mirren’s liked, but not loved Trumbo for Jennifer Jason Leigh, but The Hateful Eight’s controversial treatment of her character might have ultimately poisoned the water too much.

Not Going to Happen, But Should: Maggie Smith, Lady in the Van

Other than Brooklyn, these are the WGA picks for the same category.  Brooklyn wasn’t eligible for the WGA for reasons too complicated to go into here. So, they nominated Trumbo instead, but with a full playing field I think Trumbo will be knocked out by either Brooklyn or Room (I obviously picked the former). I am tempted to select Charlie Kauffman’s adaptation of his own play for Anomalisa as a stunning nomination here, replacing either Steve Jobs or Brooklyn, but, eh, isn’t Kauffman too weird for the Academy’s tastes?

Actually Could Happen (And Probably Should): Room

Same story as above. These are mostly the same as the WGA nominees except the WGA disqualified Inside Out (because it’s animated) and Hateful Eight (because Tarantino isn’t a WGA member). I’m predicting the Academy will select those as replacements for the WGA’s final two choices, Trainwrek and Sicario.

Actually Could Happen (And Probably Should): Ex Machina