To some, musical theatre is a trite, pointless art form, more or less the audible equivalent of fingernails upon a blackboard. The goal of “Music Theater 101” is to dispel those notions by highlighting worthy, quality contributions to the genre, challenging you to conclude that musicals might not be so pointless after all.

It may be clichéd at this point to heap more praise upon the Broadway smash that is Lin Manuel-Miranda’s Hamilton. After all, the Broadway-rap hybrid about the titular revolutionary founding father has been lauded to the point of rhapsodic exhaustion. It’s the biggest Broadway phenomenon of the 21st Century. It’s not just the score (which is brilliant), but the deliberate diversity on display every night at the Richard Roger’s Theatre. It’s a show about historical figures we can’t help but picture as stuffy establishment representatives, when in fact these guys were the rebellious free-thinkers of their time. The casting, not just color-blind but intentionally diverse, makes the show feel unique and alive in a way few Broadway shows do. 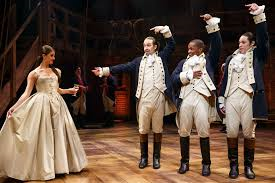 Broadway musicals are often perceived as risk-averse, art playing it safe when it should be breaking new ground. Hamilton tells the story of America’s past, using a cast that represent America’s present.

Hamilton is not the first show to put hip-hop on a Broadway stage, as even the 1957, wholesome as apple pie, The Music Man featured songs that dipped their toes into rap’s waters. To be honest, it’s not even Miranda’s first musical to combine hip-hop with a more traditional Broadway approach. After all, his first musical, In the Heights, blended hip-hop rhyme schemes and Latin rhythms with more typical, musical style. However, Miranda has as much love for Sondheim as he does for Tupac. As he told Rolling Stone, “I’m attracted to storytelling, whether it’s Biggie or Gilbert and Sullivan.” As such, Hamilton is rooted in both popular music and the musical form.

In this case, one of the most apparent musical influences is the Andrew Lloyd Webber/Tim Rice rock opera Jesus Christ Superstar. On a purely aesthetic level, the two have little in common, although both feature songs that became minor hits separate from their soundtrack. Structurally, however, the similarities become more apparent. Both feature titular characters whose lives were cut short by violence, and feature co-leads who ultimately becomes their executioners. Both JCS’s Judas and Hamilton’s Aaron Burr (perfectly played by Leslie Odom) are individuals who observe a meteoric rise from the sidelines. Both have their views about the show’s central protagonist: Judas sees Jesus as a man who is wasting a popularity that could have inspired greatness but instead yields only chaos. Burr, in contrast, finds himself watching Hamilton ascend while he atrophies. As the narrative progresses, their friendly rivalry becomes bitter enmity. Judas is able to express his views most strongly in JCS’s opening number, “Heaven on Their Minds.” Burr gets the brilliant anthem, “Wait for It.”

Hamilton doesn’t go as far as Jesus Christ Superstar in its approach to its anti-hero co-lead, as Judas’s motives appear understandable and sympathetic, if misguided. Burr is still ultimately the man who shot Alexander Hamilton in a duel for no other reason than he believed Hamilton had thwarted his political aspirations, but “Wait for It” does attempt to provide some context as to how Burr feels he should live his life versus Hamilton’s approach. Hamilton is brash and opportunistic, passionate in his beliefs and willing to defend them at the drop of a hat. To quote the song that ultimately serves as Hamilton’s anthem, he’s “not throwing away [his] shot.” 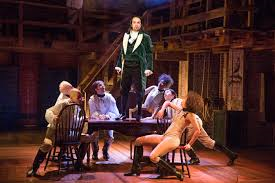 Hamilton is a penniless orphan, with a desire to prove he belongs among the elite. He can take risks, because he knows it’s the only way to reach the heights he knows himself capable of reaching. He has no reputation to ruin, so he can risk everything on a longshot chance of success. Burr is also an orphan, but he came from a family of wealth and privilege. He has a name whose reputation could be damaged if he behaves too brashly. People expect greatness from him. They expect him to uphold his family name. Those expectations temper him to the point of inaction. He must be cautious, while Hamilton gets to be reckless. Burr feels, if he just “[waits] for it,” the reason he lived while everyone died around him will reveal itself, because there must be a reason. 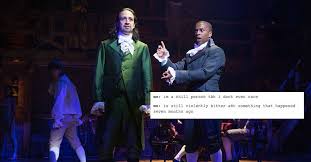 Hamilton realizes he has to make his own destiny. It’s obvious here, even though the two still identify as semi-friendly acquaintances at this point, there’s the creeping of envy in Burr’s admiration. He stands in amazement at the way Hamilton charges forward, breaking all the rules Burr feels are necessary for a rise to power, while he still feels trapped in his late parents’ shadow. It’s not as though this song broadcasts Burr’s eventual actions, but it lays the foundation for admiration becoming animosity. Hamilton is a man who lives “like he’s running out of time” (to quote another song – honestly, this show is so quotable, I’ve stopped myself more than I haven’t) whereas Burr lives like he has all the time in the world. It’s ultimately these contrasting philosophies that lead them both to the dueling ground.

So, what do you think guys? Are you a fan? Do you think Hamilton ? Let us know in the comments!